Home » Panelists Discuss Role of Jehovah’s Witnesses in the Holocaust
News, On Campus

Panelists Discuss Role of Jehovah’s Witnesses in the Holocaust

John Michalczyk, a professor of film at Boston College, was joined by guest speakers Christoph Wilker, a German historical researcher and publicist, and Max Woernhard, who has worked to research Switzerland’s history during World War II, as part of a Holocaust Symposium Panel on Wednesday evening. The speakers identified historical patterns of genocide and the role of Jehovah’s Witnesses in the Holocaust to emphasize the importance of recognizing violence as it happens as well as getting involved to combat it.

Michalczyk, who has produced several documentaries on genocide and violent conflict, presented a history of genocide that spanned from Native Americans to modern Sudan. He punctuated the timeline by pointing out the reluctance to act that allowed the violence to go uncontested.

Michalczyk said that modern U.S. presidents are afraid to label the Armenian Genocide, now over a century old, because they do not want to alienate the Turkish government.

The Turkish government maintains its policy of denying that the Armenian Genocide ever occurred. He said that stances like this have historically emboldened other leaders—Hitler even cited general apathy toward the Armenian genocide as precedent for the Holocaust.

Even the origins of the term “genocide” reflect the United States’ reluctance to become involved; the U.S. did not ratify the UN Genocide Convention for over 40 years.

“Unfortunately, the United States was very hesitant to sign on because we had to black holes in our own historical life: Native Americans [and] slavery,” Michalczyk said.

Since the Holocaust, the U.S. has avoided intervening in the Cambodian genocide and the international community has diminished the Rwandan and Sudanese genocides down to internal wars, which Michalczyk pointed to as symptoms of the problem.

Wilker, who works at the recently-opened Munich Documentation Centre for the History of National Socialism, and Woernhard, whose work includes research on forgotten victims of the Holocaust, shifted the focus to the often-overlooked role of Jehovah’s Witnesses in the Holocaust.

Jehovah’s Witnesses were actually offered the chance to avoid persecution in exchange for renouncing their beliefs and staying silent, but kept choosing to act. Wilker shared the stories of Witnesses who were convicted and eventually imprisoned for anything from refusing to participate in the Nazi salute to leading undergrounds cells of Jehovah’s Witnesses.

Wilker said the lesson to be learned from their persistence is that it is possible to say no.

“Strong moral standards linked with a strong faith made it possible for the Witnesses to do so,” he said.

Woernhard tied the previous presentations together by documenting the role that Jehovah’s Witnesses played in exchanging information between Switzerland and Germany.

Even when presented with the details of persecution against Witnesses, Swiss citizens and government officials refused to believe that Germany could ever do such a thing, leading to the suppression of a book on the subject, Woernhard said.

He also gave told the story of Narciso Riet, an Italian Witness who would smuggle clandestine literature into Germany for Jehovah’s Witnesses to read, stressing the importance of both awareness and action.

“Do we really learn something from the past?” Woernhard said. “Because now in Russia the same methods are now applied against Jehovah’s witnesses and now another number of other religious minorities under the pressure of the Orthodox Church.” 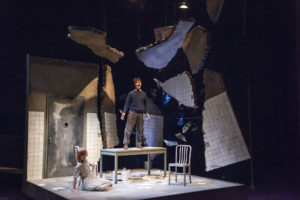