Home » Suddenly, BC Is One of the Most Watchable Teams in the Nation 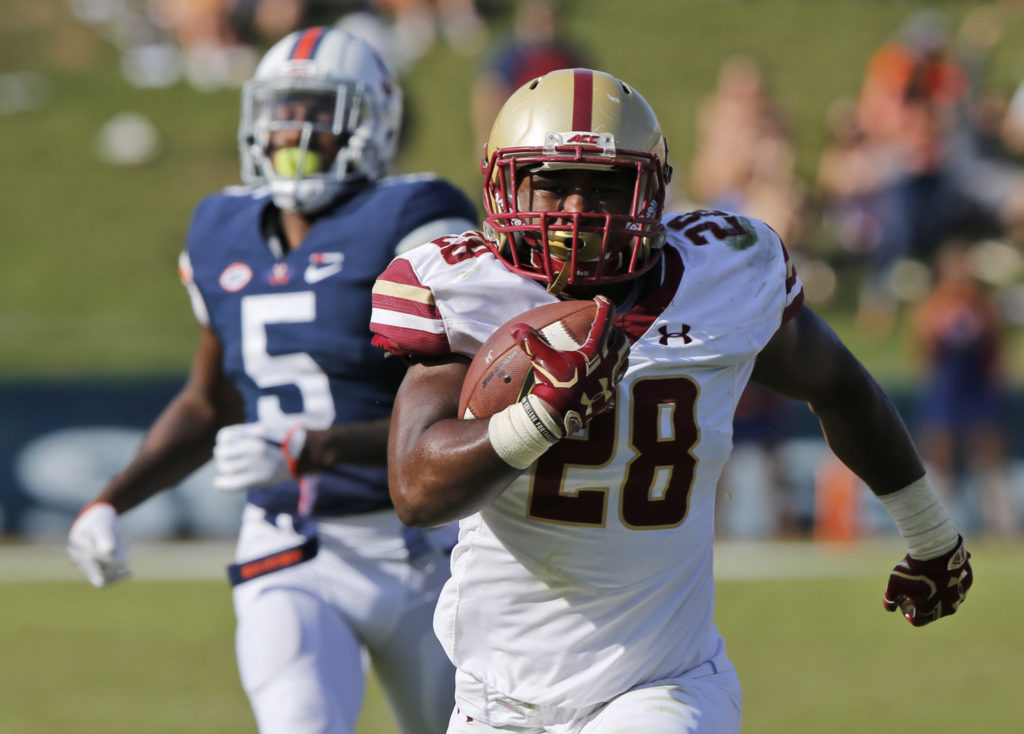 Suddenly, BC Is One of the Most Watchable Teams in the Nation

Some of these teams have more NFL prospects than others, but they all have one thing in common: the ability to score quickly and often. Every one of them is averaging over 30 points per game, and the majority are hovering around 40. As exciting as defense can be, the average football fan likes to see nothing more than points on the board. The fact of the matter is, scoring draws attention.

Three of the past five years, Boston College has cracked the top 15 in total defense. But it hasn’t mattered.

In 2015, the Eagles had the best unit by far, giving up less than 1,000 yards on the ground and a shade over 15 points per game. Conversely, BC featured the third-worst offense in the FBS. Albeit riddled with injuries at the quarterback position, head coach Steve Addazio’s team averaged a mere 17.2 points per game, failed to win a game in the ACC, and finished 3-9 overall—the Eagles’ first three-win season since 1988. Morale was at all-time low. Fans were already calling for Addazio’s head, even after he had guided his team to two-straight back bowl games and a signature win over then-No. 9 Southern California.

Last year was no different. BC had the eighth-best defense in the country, but hardly improved on the other side of the ball. Led by graduate transfer Patrick Towles, the Eagles posted just 20.4 points per game—a severely inflated average, considering BC poured on 42, 35, and 30 points against Wagner, Buffalo, and Connecticut, respectively. The Eagles never scored more than 21 points in ACC play, and on three separate occasions, they were held to 10 points or less.

Entering the 2017 season, it was justifiable to say that BC was one of the least watchable teams in the country. Not only were the Eagles one of the worst-scoring teams out there, but they were also still clinging to a run-first offensive scheme that hadn’t really paid dividends since Tyler Murphy graduated in 2014. And let’s face it. Effective or not, running the rock doesn’t have the same appeal as it did 20, and even 10, years ago. Again, people like to see their team score as fast and as much as possible. The best way to do that is through the air.

There was a sense of optimism surrounding the program when Addazio discussed his plans to employ a more balanced, up-tempo offense at this summer’s ACC Kickoff Press Conference. In his fifth-year, Addazio wanted to throw the ball more than he had ever before, all while running close to 90 plays per game. He lived up to his word, but the results weren’t pretty.

Even though BC totaled 80-plus plays three times in the first six games, and quarterback Anthony Brown was throwing the ball an average of 11 times more than Towles did the year before, the Eagles’ offense was struggling more so than it had in the past four decades. BC was posting 16.3 points per game—its lowest scoring average since the Eagles’ 0-11 season in 1978. Not to mention that Brown was recording just 4.7 yards per pass attempt. He had only completed three pass plays over 30 yards, and the entire offense had yet to log one 40-yard play. When BC was competitive, it was because its defense was keeping the team afloat. If anything, the Eagles’ offense was holding them back.

That changed last week at Louisville.

After going down 21-7 early in the first half, BC rattled off five-consecutive touchdowns—two more than they had scored against ACC opponents all season. Suddenly, a once stagnant offense was explosive.

Running back A.J. Dillon deserves the bulk of the credit, for both the win, and the Eagles’ turnaround. By rushing for 272 yards and four touchdowns, the true freshman opened up the rest of offensive coordinator Scot Loeffler’s playbook. Since the Cardinals had to respect the run, the play-action passing game—something that Addazio had been trying to figure out for weeks—finally flourished. For the first time in recent memory, BC’s offense was intriguing and, more importantly, unpredictable.

The Eagles put on an encore performance at Virginia on Saturday. BC scored 24 points in the first 20 minutes alone. Brown showcased the ability to methodically march his team downfield with two 15-play, 85-plus yard series on the day. But he also hit the big play. In the span of three and a half minutes, the redshirt freshman orchestrated a pair of scoring drives—both of which culminated in 76-yard touchdowns. By game’s end, BC had eclipsed the 40-point mark for the second-consecutive week.

The small things, like Loeffler mixing naked bootlegs and rollouts, and the occasional chunk runs through the tackles have transformed the Eagles’ offense. Unlike a few weeks ago, when BC could only score under certain circumstances—namely turnovers and punt returns—BC is volatile anywhere on the field at any point of the game.

For the first time since 2002, the Eagles have scored at least 40 points in back-to-back games. BC has recorded more points (86) over the past two weeks than all but one of Johnson’s teams: Alabama. But the Eagles’ haven’t been outscored by the Crimson Tide either. Believe it or not, BC’s scoring numbers in Week Seven and Eight have been identical to those of Alabama. Don’t be surprised if you hear students chanting, “We want ’Bama” this Friday when Florida State comes to town for the annual Red Bandanna Game. They may be joking, but BC is no longer the laughing stock of the ACC and a Power Five bottomfeeder.

In just a matter of two weeks, Addazio’s team has made a year’s worth of progress. And if Brown and Co. keeps this up, Johnson will have to add BC to his list at the end of the season. Right now, the Eagles are more than just watchable, they’re captivating.