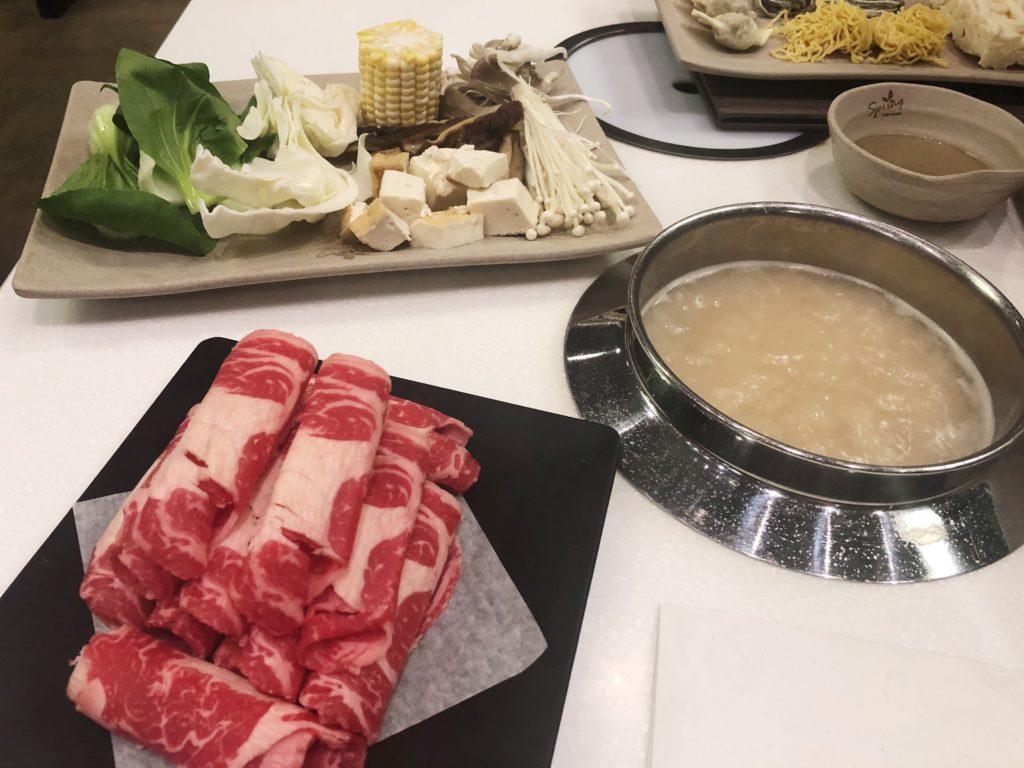 With the dreaded winter months approaching, there’s nothing better than a piping hot bowl of soup to get your through the coldest days of the year. Instead of chowing down on a tasteless carton of instant ramen or a bland serving of tomato soup, head to Spring Shabu-Shabu, a reimagined hot pot joint worth the trip to Western Ave. in Brighton.

Dining at Spring Shabu-Shabu is no ordinary Japanese-style hot pot experience. Guests have the freedom to choose from an extensive array of vegetables, noodles, fishcakes, dumplings, and sauces to compliment their hearty bowl of soup. This all-you-can-eat hot pot concept is unique to Boston—a city abundant with established shabu-shabu eateries.

The restaurant’s monochromatic interiors give the space a warehouse-like feel, marked by the high ceilings and exposed air conditioning ducts. Toward the brightly illuminated buffet counters, the restaurant takes on a more modern look—outfitted by wooden panels along the walls. Interspersed throughout the space are pale-green lighting fixtures which serve as the only pops of color in the space. The restaurant’s decor creates an atmosphere where you won’t want to linger around for too long, making room for the next batch of hungry customers on the waiting list.

The key to any good bowl of hot pot starts with the soup base. Spring Shabu-Shabu makes its broths in house daily, offering a dashi broth made from bonito flakes and kelp, a pork bone broth, and a vegetarian broth made from mushrooms and other vegetables. For those who like their soup with a kick of spice, the dashi and pork bone broths are also available in a spicy option.

To enhance the broth’s flavour and optimize the dining experience, it’s encouraged that you order an entrée of meat or seafood. Start by choosing from four variants of beef: fatty, non-fatty, prime rib, and ribeye. If those don’t appeal to you, other meats served are chicken, pork, tripe, and a less-traditional lamb option. In the mood for seafood? Spring Shabu-Shabu has platters of top neck clams, white fish, and shrimp to enjoy with your bowl.

The entrées are served raw and are cooked inside the broth. The name shabu shabu is derived from the saying, “swish-swish,” the sound made when meat is brushed back and forth through the broth to cook.

Spring Shabu-Shabu differentiates itself from other hot pot restaurants through the concept of personalization. Customers can concoct their own hot pot creations by choosing from a seemingly endless supply of side dishes from the buffet tables. Dozens of perfectly organized platters of greens, mushrooms, fish cakes, and noodles are lined up accordingly. The buffet features traditional side dishes like tofu and cabbage, and also some less traditional like pumpkin noodles and japapeño fish cakes.

At 6 p.m.—when the restaurant opens for dinner—crowds begin to gather at the entrance. By 6:15 p.m. all 234 seats are filled with ravenous diners. Spring Shabu-Shabu manager David Kim makes his rounds, working tirelessly to ensure everything functions smoothly. Why is it so popular? Kim attributes this to the fact that hot pot has universal appeal.

“It’s very healthy and affordable in a way,” Kim said. “The pricing is structured in a way that everybody can enjoy.”

When it’s finally time to sit down and eat, the server will bring over the entrée and place a bowl of soup into a circular opening in the table—a hidden hot plate to keep the soup simmering. As soon as the broth reaches a boil, start by placing items that take longer to cook, like vegetables and fish cakes into the broth. Meats—particularly beef—take less time and cook in a matter of seconds. Before diving in, the server will run you through the best way to tackle a bubbling bowl of hot pot. Take your bowl to another level by choosing from 22 different kinds of sauces to pair with your meat or pour inside the broth for an additional layer of flavour.

For restaurant manager Kim, it took him over six months to create his ideal bowl of shabu-shabu. After going back and forth between whether he liked pork bone broth or the healthier dashi broth better, one of his technique’s remained constant.

“I would take a little bowl and put an egg or two in there and just scramble it,” Kim said. “Before I put the meat into the soup, I would dip the beef into the fresh egg and soak it in the hot pot. That makes the beef very tender.”

On the surface, Spring Shabu-Shabu’s location may seem out of the way, and slightly peculiar. Kim, however, insists that the Brighton is a melting pot for college students.

“In Brighton there is a lot of development especially around Harvard,” Kim said. “Because hot pot is a trendy cuisine, our target customers are students.”

Spring Shabu-Shabu’s large weekend crowds can also be attributed to the fact that there is an abundance of parking spaces surrounding the restaurant. In order to avoid waiting in line for up to an hour, Kim suggest coming in at 6 p.m. when the restaurant opens.

If by the off chance that there is any space left for dessert after an indulgent shabu-shabu meal, the dinner special includes a decadent soft serve green tea ice cream that will have you going back for more.