Home » No. 1 Denver Scores Three Power-Play Goals in Rout of BC 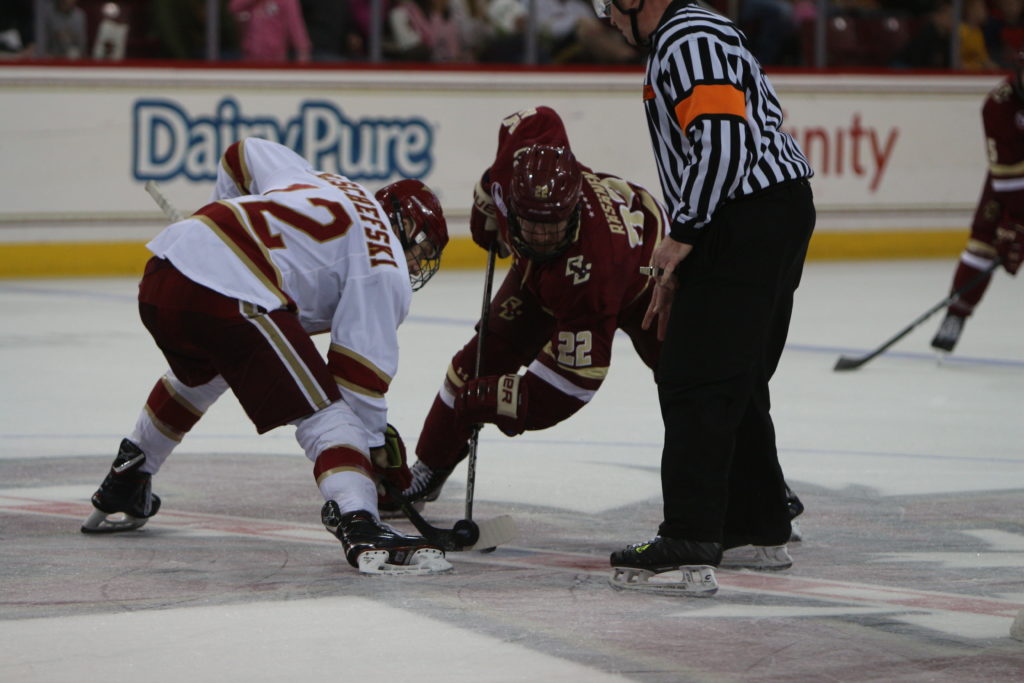 No. 1 Denver Scores Three Power-Play Goals in Rout of BC

Boston College men’s hockey showed flashes of its much-discussed potential throughout the first period of Saturday night’s game against Denver. The Eagles trailed the defending national champions, but were holding their own, even going toe-to-toe with the Pioneers in the shots department.

The rest of the game, however, showed just how much work is left to be done. The top-ranked Pioneers converted three power plays and pulled away in the ensuing periods, handing the Eagles a 6-1 defeat. No. 19 BC (1-5-1) has dropped three-straight games, but head coach Jerry York knows the season is far from over.

“Our first period was outstanding for us and we matched them stride for stride,” York said. “The difference was they continued to do it through the second and third period. They just kind of exposed us a little bit with their experience, but we’ll be better because of it.”

Eagles forward Christopher Brown scored the lone goal, just under two minutes into the final period on a power play. Brown, situated to the right of the net, masterfully deflected a pass from J.D. Dudek up into the right corner of the net. It was the only offensive bright spot for BC, as the Eagles couldn’t break through a physical Pioneers defense.

“I thought that was our best performance of the year, especially offensively,” head coach Jim Montgomery said. “We really showed skill tonight and made a lot of plays.”

The Pioneers entered Saturday’s game with the 10th-best scoring offense in the country, and set a new season high in goals scored. Just a day removed from a dramatic, last-second victory at BU, Denver showed no signs of fatigue. They finished 3-for-5 on power-play opportunities and won the faceoff battle, even scoring a pair of goals off of them.

Henrik Borgstrom and Blake Hillman tallied two goals apiece, while Troy Terry came away with a trio of assists. Dylan Gambrell filled up the stat sheet as well, scoring and adding a pair of assists. The Pioneers’ plethora of weapons and depth was evident, as the Eagles often appeared overmatched.

Gambrell opened up the scoring on the game’s first power play, cutting in from the right side and finishing off a Terry feed. Denver scored twice in the second period, with Borgstrom tipping in a long-range shot from Ian Mitchell, and Hillman burying a one-timer off of a faceoff. Eagles goaltender Joe Woll, who finished with 22 saves, didn’t have much of a chance at either shot. It looked as if the sophomore didn’t even see the the first shot, and the second came off of a beautifully executed faceoff set piece.

Denver poured it on in the third, as BC simply fell apart defensively. Despite cutting the lead to 3-1 at the start of the period, the Eagles didn’t have much left in the tank. Borgstrom buried a shot from between the circles on a power play, and shortly after that, the Pioneers tacked on two more goals. Tyson McLellan scored after a failed Eagles breakout resulted in a 2-on-1. Then, Hillman capped off the scoring spree with a shot from near the blue line.

“They’ve got players that are hard to control,” York said. “We set certain standards we try to meet, and a lot of those they won. We usually have 10 we try to accomplish in a game, and if you win eight of them, you have a really good chance of winning. We probably won three of them tonight.”

Still, Montgomery and Denver came away impressed with the Eagles, cautioning against overlooking this team come April.

Early losses have piled up, but the Eagles have faced some of the stiffest competition in the country. They rank fourth in strength of schedule after playing six ranked teams in a row, and now look to build off the tough lessons learned.

“Our team continues to grow,” York said. “We all realize we have work to do to get better as a club, and we accept that. That’s why we play these types of teams.”