At Anoush’ella, a Twist on Mediterranean Comfort Food

It all started with a complaint from Nina and Raffi Festekijan’s son regarding the current state of the restaurant industry. He was discontented that Chipotle was the only place that he and his friends could have a nice, sit-down meal. The plan was then in the works: the Festekjians would open a restaurant with these specifications.

Anoush’ella, located in Boston’s South End, opened its doors on Sept. 1, the Festekjians first venture into the restaurant world. The name of the restaurant means “may it be sweet” in Armenian.

This is an expression regarding the love of preparing food and serving it to people, and it is very similar to saying “bon appetite.” Interior design was Nina’s speciality, and Raffi was previously involved in the information technology realm, so opening their restaurant was a complete change.

A scarcity of Eastern Mediterranean restaurants with dishes from places such as Beirut, Lebanon, and Armenia was another major influence in their decision to open Anoush’ella.

Nina has also hosted and organized many fundraising events, helping her realize her love for planning and coordinating events. Ironically, the restaurant industry surrounded her for the majority of her career, but it never struck her previously that being a restaurateur was an option.

The Festekjians grew up in Lebanon and were brought up cherishing food similar to what they now cook in their successful venture, Anoush’ella. Eater Boston has named Anoush’ella one of the hottest restaurants in Boston right now.

The fine, fast-casual dining experience attracts all age groups, from high school seniors to couples that desire a nice sit-down dinner, and the fresh quality food keeps the customers coming back.

When Anoush’ella opened, the Festekjians decided that they would not have a grand unveiling. On the first day of business, they simply opened the doors to a flood of people that had the kitchen wiped clean of food by 7:30 p.m.

But one of the first things that customers saw upon entry was a beautiful table, filled with all of the 14 typical spices that are used in Eastern Mediterranean meals, including saffron and sumac.

This came to the Festekjians as a creative take on the spice market of Lebanon, but instead of being displayed in burlap sacks, the colorful array of spices is displayed within a table, ranging from red to earthy hues of brown. The tile is asphalt-colored, like the ground of a marketplace.

“We wanted to bring the atmosphere of the outside marketplace to the inside,” Raffi said.

Customers observe an intricate light fixture with a beautiful knotted pattern typical to Armenian architecture as they cross the threshold. Nina added that the stonework on an Armenian church constructed in the 14th century was the inspiration for the light fixture.

The back seating area also has the ambiance of a Mediterranean marketplace, as bright, detailed tapestry-like patterns that are found hanging in these markets adorn the seating. These inspirations came from years of traveling around Mediterranean countries.

Vibrant paintings hang from the walls, crafted by the American-Armenian artist Sirarpi Heghinian Walzer, based out of Lexington. Nina and Raffi found the artist, and Nina added that she would like to display different artists inspired by this region as time progresses.

The Festekjians explained that college students love the restaurant, especially since Anoush’ella’s location is near both Boston University and Northeastern.

Raffi reflected on the past weeks, saying that students usually come in large groups of 10 or more, and they keep coming back. They would like to open up other locations, possibly in Chestnut Hill or Brighton, to expand their vision to more people.

All of the ingredients are fresh and healthy. Everything is made fresh daily—the cooks braise the juicy and smoky meat overnight, and they also marinate the flavor-enveloped chicken simultaneously. Raffi describes it as “comfort food.” The dishes are not exactly as they would be served originally, as the Festekjians have placed their own twists and interpretations upon each dish, making them their own, including the use of a flatbread in many of the dishes.

The sai, a type of oven used to cook the wraps, is the centerpiece of the kitchen.

The Festekjians’ take on some of these recipes is to wrap them, whereas many would have been served originally simply as a dish without the flatbread, a fluffy, flavorful, and deliciously seasoned base.

One such wrap is the chicken za’atar, made with a creamy hummus, chicken that is slow-roasted and marinated with za’atar (a typical Mediterranean spice-herb combination that adds a powerful, tangy taste to many dishes), juicy tomatoes, baked fries, a pickled turnip that adds a pop of flavor and color to this dish, and garlic sauce.

With the ingredients and herbs melding together, everything is wrapped in a m’anoush, a form of flatbread wrap. Customers can also add side dips to the meal, such as the hummus—topped with aleppo peppers, it is a delicious, smooth, and creamy side that when complemented with the soft, chewy chips presents an earthy flavor profile— and labneh, a strained Mediterranean yogurt with a thick and creamy consistency and a slight tinge of tartness that elevates every menu item.

A selection of house-made drinks also populate the menu, such as the thyme and ginger lemonade, a citrus drink that brings an acidic flavor to the Mediterranean meal.

As the menu states, “Anoush’ella. It’s an expression of the love, pride and enjoyment that goes into serving someone who enjoys food and thank you.” 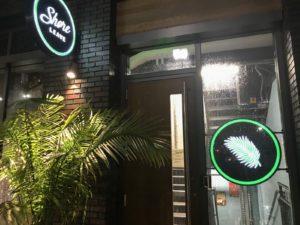