Students are often overwhelmed by the seemingly limitless avenues they can take to practice the Jesuit ideal of “men and women for others” while at Boston College. With service immersion programs such as Appalachia Volunteers and Arrupe, and clubs like 4Boston and Eagle Volunteers to name a few, it’s easy to feel as if all the bases have been covered. To Ian Wyllie and Cecilia Milano, both MCAS ’18, however, there seemed to be something missing.

As students both interested in public policy, a field with the intent to advance society through the adjustment of political procedures, Wyllie and Milano recognized the need for an organization which promotes the development of this work. The abundance of clubs on campus relating to public policy was evident, but the lack of an entity that could provide a sense of cohesion among these groups was even more apparent.

“There are a lot of different clubs that have similar types of people … students who are interested in policy in some way, but there was no uniting body,” Milano said.

Organizations related to public policy such as College Democrats, College Republicans, Economics Association, and Eagle Political Society are some of the groups between which Milano and Wyllie hope to form a connection.

During the second semester of their sophomore year, Wyllie and Milano set off to establish an institution that would promote collaboration between students looking to pursue public policy at BC. Though they didn’t end up achieving this goal for one year, they finally established the BC Policy Council in the spring of 2017.

According to Wyllie, the process of creating a club is quite tedious. They first needed to communicate with the School of Social Work and the economics and political science departments to understand how the council could maximize its impact on as many parties as possible.

After the writing, editing, and rewriting of a proposal for the organization, they moved on to strategizing the logistic operations of the club. The formulation of a constitution and by-laws was the next step in their preparation for the presentation they would be giving to the Office of Student Involvement (OSI).

The Policy Council did not receive immediate approval due to a supposed lack of understanding of what the Council aimed to accomplish. This setback was not enough to deter Wyllie and Milano from the eventual establishment of the organization, however.

The two remained vigilant along with the help of other members of the BC community. Rohit Bachani, CSOM ’19, and Tiziana Dearing, a professor in the School of Social Work, both played crucial roles in getting the club up and running, according to Wyllie. They were both active contributors to the formulation of the proposal given to OSI and they remain very much involved with the council today. Bachani now serves as secretary on the executive board and Dearing continues to serve as an adviser for the Policy Council.

“[Dearing] has been really instrumental in working with Ian Wyllie on the formation of the club,” Milano said. “It kind of grew out of one of their conversations where she was noticing that there was something missing here.”

Over time, as Dearing and the students gathered the necessary components of a convincing proposal, they received approval from OSI. The vision that Dearing described is still a work in progress, as the club needs time to gain momentum and to get to a place where those goals are achievable. The council has, though, made some substantial leaps in creating an entity that has the potential to impact public policy at BC on a large scale.

The Policy Council is currently comprised of 10 independent clubs, or member organizations, that collaborate to set up events concerning policy. By avoiding the profligate practice of holding similar events on multiple occasions for each organization, the council hopes to make a more efficient use of resources on campus.

Prior to the council, if College Democrats, for example, were hosting a speaker who appeals to a member of College Republicans or Economics Association, they might not have knowledge of the event. According to Milano, the Policy Council attempts to connect the members of the 10 groups so that they can take advantage of any policy related event that may interest them.

The way in which the council goes about promoting this collaboration is through a newsletter sent to all the user organizations. It contains a list of events regarding public policy that the organizations can choose to get involved with or attend. According to Wyllie, the first newsletter was just sent out this October.

Though efficiency is a key factor in the motivation behind the newsletter, Wyllie emphasized that the council hopes to accomplish much more than just minimizing the amount of superfluous events on campus.

“We’re trying to bridge a gap with the fact that we can’t do what an institution could do, but we can show that there’s interest [in public policy] and we can pool resources to get a little bit further,” he said. “We are trying to have the mindset of other student organizations that have done a great job of putting together different events.”

Another element of the council is centered around career planning in the policy sector. Milano serves as the career director, and she provides students with the means to build a possible future in public policy.

According to Milano, the Career Center has many strengths, but she notes the fact that there is room for growth in resources that could benefit students looking to go into the field of public policy.

Holding the position of career director requires Milano to oversee a group within the council known as the careers team. The main objective of this group is to establish a mindset among the members of the different organizations involved that a future in public policy is very much possible and attainable.

The creation of the Policy Council has been a rather selfless effort on the end of Milano and Wyllie. With hopes of establishing a more proficient and accessible pathway to success in public policy, they refused to back down despite the constant obstacles they faced and the extensive efforts they needed to exert in order to achieve their goal.

Though not the driving force behind founding the council, Milano and Wyllie recognize the many ways in which they have benefitted as a result of their work with the club.

Since Milano has been exposed to many people who share her passions in the public sector, she has been able to benefit a great deal from their collaboration.

“I think I have a much better understanding now of when I say I want to go into policy…of what that actually means,” Milano said.

Come May, Milano will be working in New Orleans with Teach for America. As she eventually wants to pursue a career in educational policy, Milano feels that she needs to gain some perspective on the challenges present in public schooling systems in order to better understand where the need for improvements lie.

On the other hand, Wyllie doesn’t have any immediate plans to go into policy, but intends to first get involved with the business world. The skills that he has developed throughout the process of establishing an operation such as the council and serving as its chairman have provided him with a great deal of the experience necessary in achieving success in the field of business.

According to Wyllie, many of the positions on the Policy Council are going to become available with the conclusion of the spring semester, as the board is currently led by seniors. He hopes that students looking to expand upon policy on campus can find their way to the council and contribute to its mission.

Due to the tremendous amount of work that was required of the students to create the club, Wyllie sees promise in its abilities to continue the growth toward forming a higher appreciation of public policy of BC’s campus.

“It’s been a long process but we’re hopeful that because it’s taken so much time and because there’s so much thought that went into it, it’ll actually be something that can provide a voice for students to come through the public policy sector,” he said.

Dearing expressed feelings of optimism not only surrounding the Policy Council’s prospective successes, but the successes of all students looking to make social or educational advances on BC’s campus.

“I think it’s exciting to see entrepreneurial students caring about and being passionate about public policy, because innovation is as important in policy as it is in any other part of life for social change,” she said. “To see students with that in their DNA, who care about these subjects, just makes you feel good about the future.” 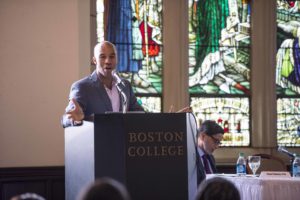