Within the world of art, a common cultural currency is exchanged. Ideas are supplanted from other places and new ideas arise through migration, breeding a healthy stock of artistic minds and innovators. That artistic stock certainly has found its way into the ranks of Boston College’s arts faculty and the world at large has taken notice. Mark Cooper, a resident faculty of the practice, was recently named a 2017 Fellow in Sculpture, as one of the recipients of the Massachusetts Arts Council Awards. The awards, which function on funds from state legislation and the National Endowment for the Arts, gives funds local artists for their marked contributions to the state community and the world at large. Though cultural currency is disseminated readily in artistic arteries, other forms of currency are accepted as well. For Cooper, who received a $12,000 prize, the award marks, not only a pleasant moment of recognition by peers and colleagues, but a way to further finance his work and process.

Cooper is best-known for his large public art pieces made for public display at various institutions ranging from the Museum of Fine Arts Boston, Capital Children’s Museum in Washington, D.C., and the Whitney Museum of American Art at Philip Morris. His works of fiberglass, paint, rice paper, and silk screens are big and take up a space, leaving viewers to interpret and physically stand among his pieces and analyze the dialogue therein. As a result of his large, composite style, much of Cooper’s works are best experienced in a lived setting, taking into consideration the breadth of the work as it is laid out.

The Massachusetts Cultural Council awarded Cooper for his work in sculpture installation in new genres.  Artists can only win an award once every five years in the state of Massachusetts, allowing for others to benefit from the allocation of funds. Cooper had won the fellowship in 2011 and says the state sponsored grants for artists are especially unique, as many states do not have funded arts bodies like Massachusetts.

Cooper was selected based on his numerous installation and exhibitions over the past three years. He has truly spanned the globe, with exhibits reaching Beijing, China, the National Museum in Hanoi, Vietnam, the Kemper Museum in Kansas City, and both the Museum of Fine Art and the Boston Museum of Contemporary Art in Boston. Each of these installations offer unique visual styles, ranging from natural shapes of honeycomb and harsher geometric objects to whimsical shapes vacillating like the waves of the ocean.

“There is a lot of subtext to my work, the notion of collecting and collections, and why people put things together. It references architecture, rogue bees nests, things, microcosm, macrocosms,” he said. “The conversation of all living things.”

Much of Cooper’s work, especially installations, is collaborative. In many cases, whether it be by other artists, a curator, or simply someone who is helping him organize and install the exhibit, other voices are always welcome. This blending of voices, lends itself to the process of creating unity through art.

“Everyone brings their own voice and you do not compromise your voice, but you do work in harmony with other voices,” he said. “When you get a lot of voices speaking, there’s huge potential.”

Art is meant to illicit responses and Cooper does that through a conscientious integration of the viewer into his exhibitions. Long before anything is crafted or finalized, Cooper visits the site, where he measures diligently lengths, widths, and heights. He responds the the space and in a allows for it to shape the narrative he is going to place within it. It is better, in his mind, to create something fresh and unpredictable even to him, than something rigid and predetermined.

“When you have collage, I have learned that it engages viewers brains different than a linear narrative.”

Cooper desires a narrative that is dynamic, with turns, spins, and inversions. His organic styles lends itself to this end and gives viewers a lot to consider visually. In the end, he wants to convey that the installation, as a whole, is an art piece. And in some sense, that means the viewer is part of the installation itself.

If a viewer is traversing the paths of his exhibit, gazing up at massive painted fiberglass structures, or peering down on smaller, but equally as remarkable constructions, they are engulfed by his creations on all sides. They regard a piece, but others linger in the periphery. They marvel at one object and are reminded of another. They draw connections. They, the viewers, are the connective element that makes the exhibit whole.

“When there is a juxtaposition of component parts, a viewer has to bring their own experiences into it and see where they fit within it,” he said.

Cooper’s larger ideas are married neatly to his organic style, as pervasive notions of unity and belonging can been seen throughout his work.

“The overall metaphor in my installations is that the sum of the parts is greater than the individual parts,” he said. “And that simply, if we work together, maybe we can make the world a better place.”

Looking to the future, Cooper is already planning on putting his prize money to good use. He currently has a museum show in Seoul, South Korea and has allocated some of the fund to shipping the works to be displayed. Additionally, he has a major exhibition in New York in the late spring. The use of the money was a obvious as he knew he would use it to subsidize what he has always been doing, but in a larger sense it represents a validation of his work, and serves as a motivating factor in the months to come.

The notion of pieces of a whole may often be overlooked. But for Cooper, this is a central tenant, not only of his style, but of his goal of unifying through collaborative art and dialogue. Art is a vessel, through which such ideas may be actualized. All we have to do is step into it and engage. 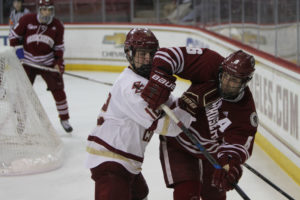