A group that started with four people performing a synchronized dance quickly became a street full of people doing the Macarena as they followed the lead of the video projected on the building in front of them.

A crowd formed around the professional dancers of MetaMovements, a Boston-based music community, to watch as they led the passers-by who had been inspired to join in on just one of the interactive art exhibits offered throughout the neighborhood. Washington Street was transformed by the light, sound, and energy of one of Boston’s premier arts events.

According to its website, the goal of the Illuminus Festival is to “create immersive experiences that turn city streets into an installation gallery.” It was inspired by the nuit blanche art movement that originated in Paris. The idea behind it is to have free night-time art exhibits that turn ordinary city areas into cultural centers that create a community of people gathered to experience art together.

The Illuminus Festival was created by Jeff Grantz in Boston in 2014, and returned to the city in 2015 for its second appearance. It’s co-sponsored by the Downtown Boston Business Improvement District and LuminArtz.

After not taking place in 2016, the festival was reinstated this year featuring exhibits from over 20 artists. Some, such as the creators of the Gridlock interactive installation, are veteran artists, having been involved with Illuminus since its inception.

Created by Masary Studios, Gridlock consists of large blocks that can be touched, moved, and manipulated by the public to create displays of light and sound that are projected on an adjacent wall. Maria Finkelmeier, who produced Gridlock along with Sam Okerstrom-Lang and Ryan Edwards, observed the public reaction to her piece from a nearby tent where they kept sound and light equipment.

“This year we’re excited to create a truly interactive piece for the public,” Finkelmeier said. “I hope the public sees themselves as the artists—as the people creating the music, creating the visuals, creating the play.”

William Lee and Josh Seim, who were referred to the festival by friends studying at the Massachusetts College of Art and Design, agreed that the best part of the festival was its connection with the audience.

“It’s involving the public, which is awesome,” Seim said.

In addition to interacting with the public on a physical level, some exhibits were created with the intention of promoting thought and compassion among its viewers.

Lantern Story shares the experiences of immigrants in the United States. Cube-shaped lanterns hang in groups of two on wires between trees. Each side of the cube has different answers to the questions, “Why do you want to be here in United States at this time? How long do you plan to stay in United States? Describe your job/occupation, and if you didn’t have a U.S. visa where would you be and what would you be doing?”

The crowd was quieter at this exhibit than at Gridlock or MetaMovements as they read and photographed the responses of the contributors. Answers for “Why do you want to be in United States at this time?” ranged from, “There are more potential buyers in the United States for the products I want to make”, to “Family and Opportunities”, to “I’m in love.”

Furen Dai, the artist behind Lantern Story, hopes that people will remember the voices of the individuals in her exhibit after the festival is over. Dai asked her friends for help finding subjects to interview, but explained that each person could only produce three to five names. Dai was saddened by this, because as an immigrant, she is aware that there is a large population of people with stories to share. Dai hoped that the installation would “turn these anonymous people into real people,” so that viewers could “realize their existence around you.”

People walking through the festival ranged from frequent art viewers to curious individuals and couples who just happened upon it.

Cary and Jolene Ward were walking home from the American Academy of Medical Colleges Meeting at Massachusetts General Hospital when they heard the music on a street corner and stopped to observe. Self-proclaimed frequent museum-goers from Omaha, Neb., the Wards agreed that Illuminus was “totally different” than what they usually see.

“It’s a venue for people to gather,” Jolene Ward said.

Isabelle Stromberg, a freshman at Barnard College, saw the event advertised in The Boston Globe, and decided to check it out with her mom while home on fall break.

“It’s more interactive,” Stromberg said. “You get all sorts of people, people that are walking by not necessarily looking for art, but stumbling upon it.”

The Illuminus Festival certainly has the ability to attract people to its exhibits. When it began in 2014, only 10,000 people attended. Just one year later it attracted 30,000 people. While its location will change every year, its mission will not.

“It’s less about giving them something, and more about them giving themselves the gift of art,” Finkelmeier said 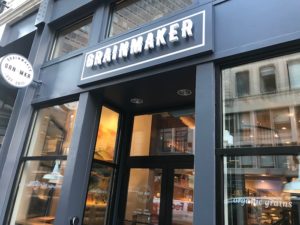