Home » Students Take to the Table for Ping Pong Tournament 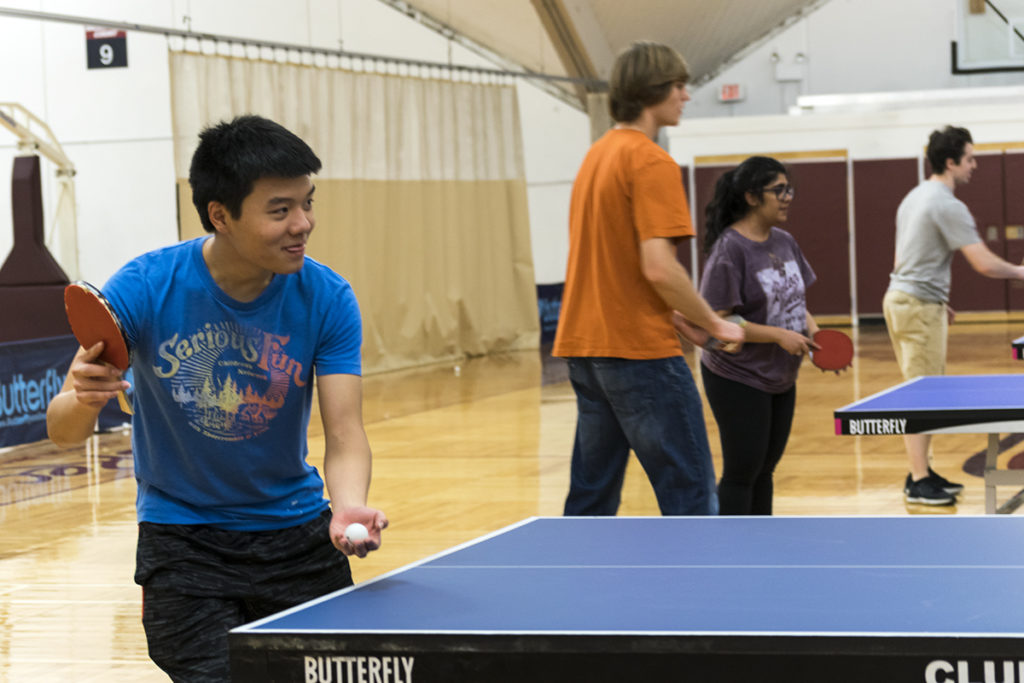 Students Take to the Table for Ping Pong Tournament

It was 12 p.m. on Saturday and competition was in the air. Students around Boston College gathered at the Flynn Recreation Complex, driven by a fierce desire to win one of the most cutthroat tournaments of year: the Campus Activities Board (CAB) Ping Pong Tournament.

The tournament, a collaboration between CAB and the BC Table Tennis Club, gave students the opportunity to show off their ping pong skills to their friends and strive toward first place. Divided between beginner, intermediate, and advanced brackets, competitors could play against others with similar skill sets.

More importantly, however, the winner of each division would win a stunning grand prize: a coffee mug customized with a “BC Ping Pong” label. The winners would always get to look at their mugs and reflect on the sweet satisfaction of the day’s victory.

But getting the first-place prize was no easy feat. Going into the tournament, all competitors had to develop their own unique strategies to beat their opponents. Examples included—but were not limited to—altering the length and spin of one’s serves to confuse the opponent, planning the moves in advance, and knowing the right time to strike a winning shot.

For many of the day’s competitors, playing table tennis was a lifestyle choice that they made at an early age. Take Sireesh Vinnakota, MCAS ’21, who has played ping pong with his family for practically as long as he can remember. Nonetheless, as he has gotten busier over the years, he has had less and less time to practice this pastime.

Competitors faced highs and lows as the day went on and were oftentimes forced to rethink their strategic approaches. After finishing a rough first round, Vinnakota thought it would be good to get in his next opponent’s head by frequently switching up the spin in his serves. He also considered paying attention to whether the opponent’s forehand or backhand is better, and then hitting to the weaker side.

As such, he calls table tennis “a game of chess,” as one is constantly forced to adjust based on the style of the opponent. What any player has going for him is that only he knows what he will do next—the competitor can’t predict whether he will cut it or straight serve it, or go for a winning shot or simply return the hit.

Nick Casieri, MCAS ’21, felt he would achieve victory by focusing more on spin than power. He also returned every shot throughout the day while waiting for the opponent to mess up.

As someone who has always enjoyed playing ping pong, he decided to participate in a tournament his senior year, but unfortunately didn’t do as well as he had hoped going in. But Saturday presented a new opportunity for him.

“This is my shot at redemption,” Casieri said.

As the day continued, competitors were eliminated and the stakes were higher as they advanced to the out rounds. Vinnakota and Casieri were eventually beat by other students, though they certainly gave a tough fight.

Come the final rounds of the day, tension had nearly augmented to its breaking point. Playing in the intermediate final round, Dharan Kumar, MCAS ’20, faced Austin Hord, MCAS ’20, in a very balanced round. The players returned shots back and forth for what seemed like hours at a time, leaving the audience wondering if they could ever mess up. In the end, Kumar came out on top, claiming the glorious prize.

In the advanced final round, James Liao, MCAS ’21, played against Richard Spinelli, MCAS ’18, in a very close match. A load of fans cheered loudly for the two highly skilled competitors during this intense round. Though the scores were very close each round, Liao came out on top in the end, winning both 2 to 0.

In the end, Alycia Kent, the coordinator of the event and participant in the event and MCAS ’20, was very satisfied with the day. As this was the first time CAB ever put on a ping pong tournament, the group felt that it was a great way to give students a break from studying.

It’s hard not to love ping pong, whether you are a professional or simply just a beginner. It brings people together in fun, light-hearted atmosphere that is guaranteed to generate lots of laughs.

“I’m so bad, but ping pong is just fun,” Kent said before the event. “I’m sure I’ll get destroyed.”