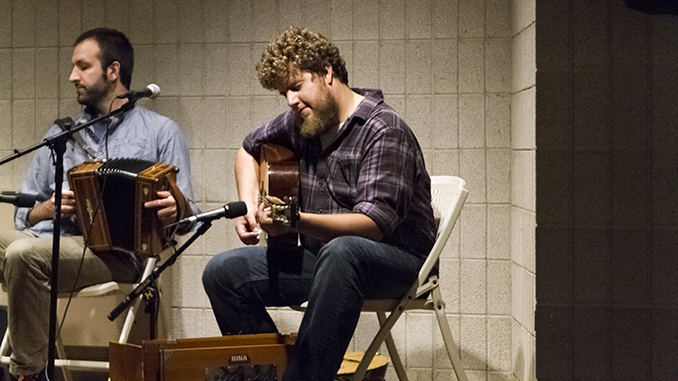 Irish music and culture surrounds and envelops Boston College, almost literally. The entire city of Boston is rich in Irish culture, religion, and experience. There is the warm and inviting Connolly House on Hammond St., slightly south of Middle and Upper Campus. Now, after the most recent event at the Theology and Ministry Library, on the north side of Brighton campus, Ireland’s presence is felt at all points of the compass. If you squint west, you might just be able to make out that western bastion of Ireland, the University of Notre Dame.

On Thursday night, the Gaelic Roots Series hosted The Press Gang for a night of lively traditional and contemporary Irish music. Fresh off its concert in Somerville the night before, The Press Gang took the small stage of the auditorium in front of a small group of dedicated Irish culture enthusiasts.

From the start, energetic and high-tempo music poured forth from the stage. The first song expressed the talent of the musicians and their adoration for their craft. The Press Gang began with “a few gigs and a reel,” which included tunes like “The Apples in Winter” and “The Godfather.” These tunes highlighted the bright and vibrant sounds of the flute and accordion. At one point in the first set of songs, The Press Gang deconstructed the sound, down to the base of string instrumentation, and then proceeded to rebuild the song from there. This highlighted the individual and unique aspects that each player was contributing.

The Press Gang is a traditional Irish band from Portland, Maine. The band is made up of four members. Christian Stevens was the designated accordionist, playing both the concertina and the button accordion. On multiple fiddles throughout the night was Alden Robinson, and on the guitar, Irish bouzouki, and harmonium was Owen Marshall. The newest addition to the band was Hanz Araki. Hanz doubled as the flutist and the solo vocalist when the songs demanded it. Together, the four musicians took those few Irish music enthusiasts present on a whirlwind tour of Irish music. The traditional was influenced by the modern, and the setlist featured Irish tunes so classic that their origin had long been forgotten and original and recent compositions by The Press Gang.

Throughout the rest of the performance, The Press Gang displayed not only their musical talents, but also their ability to entertain the crowd in other ways. Between songs, the musicians would banter back and forth with each other and with members of the audience. One of the common comedic bits was the consistent plugging of their new album, which was conveniently for sale in the atrium of the auditorium. At one point, they introduced their next song as “The Banks of the Nile.” Marshall was very adamant that any audience members who enjoyed that song could very easily and affordably purchase it and a handful of others in CD form directly after the show. The humorous effect with which the band members hawked their music resonated with the audience members, and a few chuckled good-naturedly as they purchased it.

The performance by The Press Gang stands out from other events in the Gaelic roots series because of the contemporary spin the band adds to the music of Ireland. Many other events play music and perform dances in the same way that they were hundreds of years ago. The Press Gang has adopted instruments that might have been frowned upon by the Irish musical elite just a few decades ago. Marshall elaborated that the string accompaniment was an effect of the Irish folk revival that occurred in the ’60s. The inclusion of a guitar is very new for Irish music, but it adds an instrumental element that is sorely lacking in other performances that members of the Boston College community might have experienced.

The evening ended on a high note. As the final chords and notes of the last song faded out, the audience erupted in applause as the musicians made their way off the stage. In the back corner of the room, the members of The Press Gang conferred briefly with each other while the attendees continued to clap and cheer. After a brief discussion and a few smiles, the band retook the stage for an encore. “Sweet Forget-Me-Not” was the final tune of the night. The Press Gang invited the audience to join in on the chorus once they caught the words. A few bold and excited members seized the opportunity, and poured their voices out right along with Araki. The warmth did not fade along with the encore. Audience members mingled with Gaelic Roots coordinators and musicians alike. The night air was cold and bitter, but the heat left over from a few hours of foot-stomping reels and tunes suffused the twilight hours. 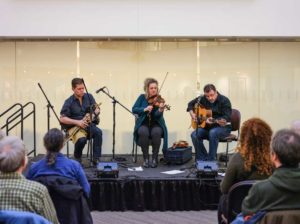