Home » On Anniversary of Trump’s Election, Union Calls for BC to Drop Appeal
News, Top Story

On Anniversary of Trump’s Election, Union Calls for BC to Drop Appeal

Members of the Boston College Graduate Employees Union gathered in O’Neill Plaza Wednesday to call on the University to drop its appeal with the National Labor Relations Board.

The union, which voted for collective bargaining rights with BC in September, held a similar rally last month. Wednesday’s rally was organized specifically on the anniversary of the 2016 election of President Donald Trump. Union members at several other universities, including Harvard University, Boston University, and Northeastern University, also held rallies Wednesday.

BC has asked for the NLRB to review its decision in granting the union an election.

“We used our democratic voices as grad students to vote yes to the union,” said Bryn Spielvogel, a Ph.D. candidate in the Lynch School of Education. “We want to sit down at the negotiating table, talk to administration and make a positive change.”

Also on Wednesday, U.S. Senator Bernie Sanders of Vermont sent University President Rev. William P. Leahy, S.J., a letter asking BC to support the union. The union reached out to Sanders’s office to request the letter, an organizer said.

“As an internationally prestigious institution of higher learning, I hope very much that you will set an example throughout the world by supporting the democratic decision made by graduate students and teaching assistants who voted to form a union,” Sanders said. “To appeal this decision to an anti-worker, Trump-appointed National Relations Labor Board is not something that a world class institution of higher learning should do.

“To my mind, it would be a huge mistake to attempt to roll back these workers’ rights to organize,” Sanders said.

Gage Martin, a graduate student in math, spoke at the rally as well, addressing the issue of sexual harassment and assault in academia.

“It feels like every day there is a new story of a man abusing his power and perpetuating sexual assault,” Martin said. “This is not just a problem in Hollywood or Washington D.C. It is endemic to academia as well.”

Priya Lal, a history professor, spoke at the rally about the importance of fighting for the rights of workers.

“Now more than ever is the time to appreciate the power for education to create a better world, to materially value the world of teachers and politically recognize their rights,” Lal said.

Among all other grievances, many graduate students felt this matter was especially important, due to how much BC labor demands of them on top of schoolwork and other jobs, according to graduate student Michael Bailey.

d“I cannot be the best TA I can be if I am hungry, if I cannot afford rent, if sexual assault is happening in my environment or affecting people I know or myself,” Bailey said. 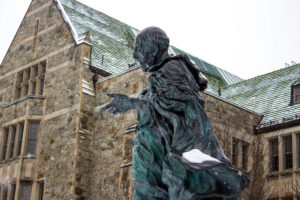