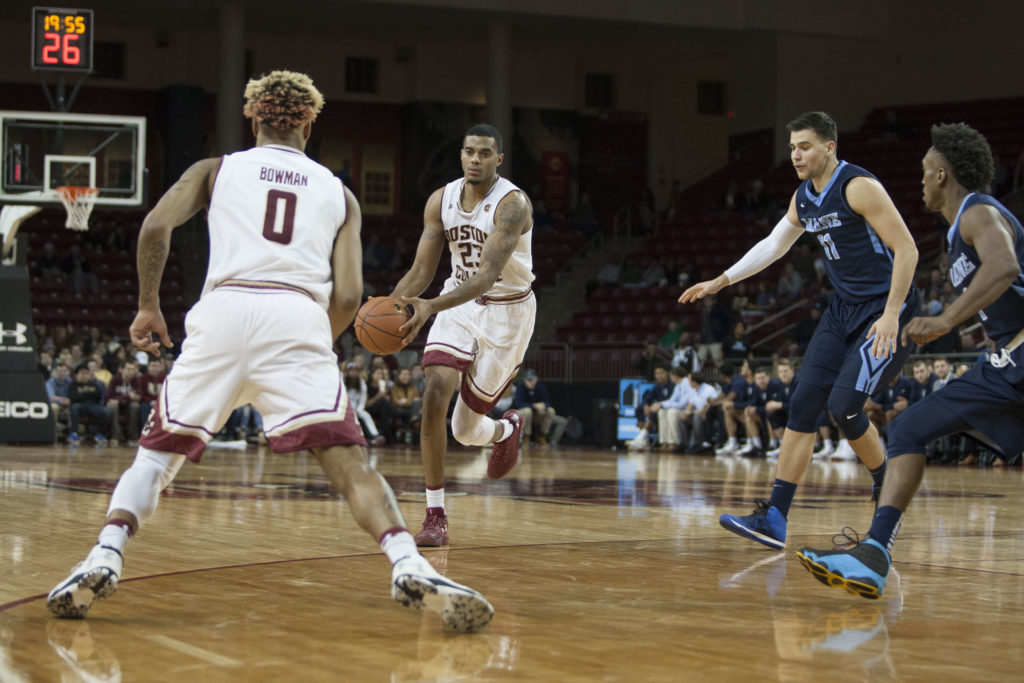 Hawkins, Frontcourt Steal the Show in Season-Opening Win Over Maine

This offseason, buzz surrounded Boston College men’s basketball’s leading scorers and potential NBA prospects, Ky Bowman and Jerome Robinson. Together, the underclassmen duo averaged 33 points during the 2015-16 season and, in ACC play, rounded out the top-five highest scoring backcourts in the country.

According to fans and analysts, BC’s fate rests in Bowman and Robinson’s hands.

But in the first half of the Eagles’ season opener against Maine on Friday night, they were an afterthought. It was the guys inside, who stole the show. Nik Popovic and graduate transfer Teddy Hawkins teamed up to score 16 points—five more than Bowman and Robinson. Popovic looked significantly stronger in the paint than he did a year ago, and Hawkins showcased the ability to stretch to the floor, hitting multiple jump shots, including one from the top of the key. Not to mention that the two racked up 13 rebounds, just four shy of the Black Bears’ first-half mark.

Thanks to Popovic and Hawkins, BC could afford to miss outside shots. Despite only shooting 44 percent from the field and just 25 percent from deep, the Eagles went into the break with a seven-point lead. As soon as Bowman and Robinson found their rhythm in the latter portion of the game, BC pulled away. The Eagles outscored Maine 50-37 in the second half, en route to an 85-65 victory.

Right from the get-go, it was clear that the Black Bears were going to try to outrun and outshoot BC. Maine jacked up 10 triples in just as many minutes. At first, they were falling. Aaron Calixte, Danny Evans, and Trae Bryant all drilled shots from the perimeter to give the Black Bears a 12-6 lead, four minutes into the game. That’s as good as it was going to get for Maine.

Soon after, Popovic blocked two shots—one of which led to a jumper on the opposite end of the court—and Hawkins logged seven-consecutive points. Robinson wasn’t shooting the ball well from the outside, but had a lot of success driving to the rim.

Evans and Ilija Stojiljkovic knocked down a pair of 3-pointers to bring the Black Bears within one, but BC responded with a 10-4 run to close out the half. Maine went cold from 3-point land, Bowman scored his first bucket in over 10 minutes, and Hawkins put back a missed perimeter shot before the buzzer to give the Eagles a 35-28 advantage at the half.

Bowman only scored four points in the first 20 minutes of play. It only took the former All-ACC Freshman one minute and 58 seconds to nearly triple that mark. First, he took the ball to the hole for a lay-in. On the next possession, he penetrated the defense again. This time, he drew contact and sunk both of his free throws. The seven-point stretch culminated in a 3-pointer from the right side of the arc.

Bowman was back, and so was his partner-in-crime, Robinson. The junior, who head coach Jim Christian said played “a little too cute” in the first half, amped up the physicality in the second. Time and time again, Robinson embraced contact, as he attacked the hoop, notching his second old-fashioned 3-point play of the game. Both guards finished as the night’s leading scorers with 18 points apiece.

Reluctant to take the ball inside, the Black Bears continued to shoot from downtown. They had a bit more luck than they did in the first, hitting 6-of-14 3-pointers, but, without an interior presence, they were helpless. By the game’s end, Maine had more 3-pointers than it did 2-point field goals.

Down low, Hawkins and Popovic terrorized the Black Bears on the glass, even more so than they did in the first half. Hawkins had 10-plus rebounds before the halfway point of the second period, and a double-double by the seven-minute mark. Foul trouble cut Popovic’s playing time short, but his backup, Johncarlos Reyes, did more than enough to fill in his shoes. Reyes, a third-year player who averaged a mere 1.6 points per game last season, poured on a career-high 12 points. He capped off his breakout performance with an emphatic dunk that put an exclamation mark on the Eagles’ blowout victory.

With the game out of hand, Christian checked in a host of freshmen, including a couple 17-year-olds: Vin Baker Jr. and Avery Wilson. Garbage time was a luxury that Christian didn’t have in last year’s season opener—a six-point loss to Nicholls State. As far as the fourth-year head coach was concerned, it was pretty obvious why his team won the way it did.

“If you can hold a team to 35 percent shooting and outrebound them, you’re going to have some success,” Christian said.

Numbers aside, BC looked like a much-improved team. For once, Bowman and Robinson didn’t have to shoulder the scoring burden. With an action-packed non-conference slate on tap, the backcourt is inevitably going to have its off games. On Friday night, Hawkins, Popovic, and Reyes proved that they too can carry the team when need be.