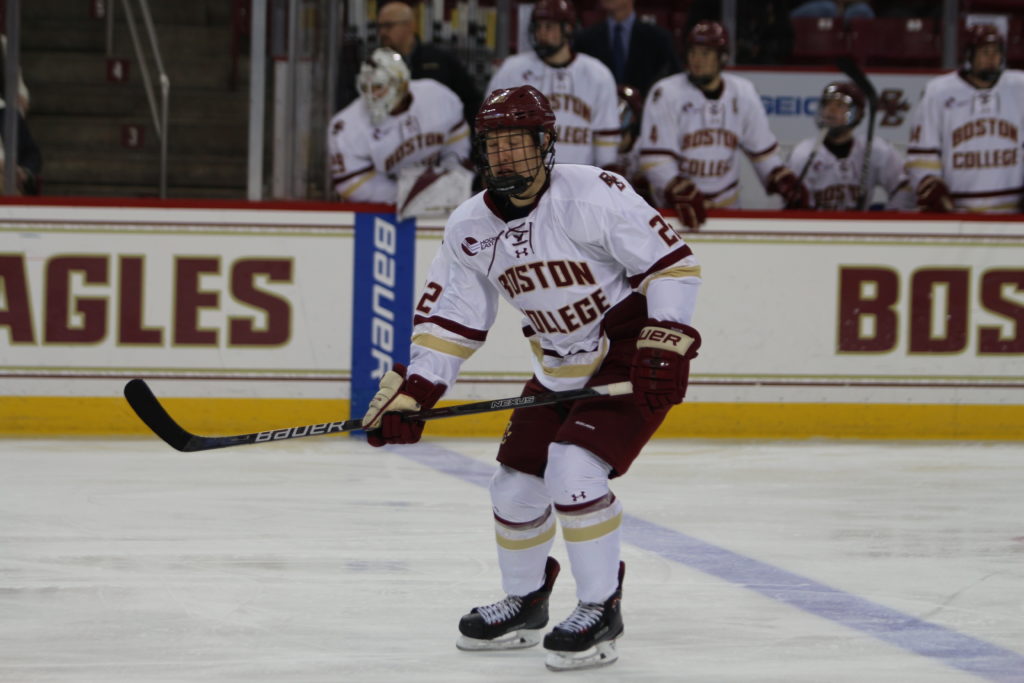 BC Earns Comeback Victory over Vermont

Throughout the first month of Boston College men’s hockey’s season, the prevailing story has been one of growth. With a roster that features just six upperclassmen, early losses have been chalked up to inexperience and a team still looking to gel.

On Friday night against the University of Vermont, the Eagles (5-5-1, 5-1-0 Hockey East) showed signs of what head coach Jerry York has teased for weeks.

The second line—composed of freshmen Logan Hutsko, Christopher Grando, and Aapeli Räsänen—broke out for four goals, leading BC to a 5-3 comeback win over the host Catamounts (3-6-1, 1-2-1). Hutsko and Räsänen each scored twice, contributing part of a seven-point night for the trio of Räsänen. Räsänen, who had yet to score a goal this season, netted the game-winner with just over three minutes to go.

The Eagles, who hadn’t played at Gutterson Fieldhouse since February 2016, were greeted by a raucous home crowd featuring countless students brandishing yellow thunder sticks. With just four players on the current roster that made the last trip, the youthful BC team faced an uphill battle.

It was no surprise, then, that Vermont came out firing. The Catamounts needed just under six minutes to take the 1-0 lead, with Max Kaufman scoring a long-range wrister. Coming just seconds after a Vermont power play expired, Kaufman beat Eagles goaltender Joe Woll to the left side, catching the sophomore off guard.

Six minutes later, Vermont went back on the power play—and again converted shortly after the fifth Eagles skater returned. The Catamounts capitalized on early holes in the middle of BC’s defense, with Kaufman feeding Anthony Petruzzeli in the slot from across the ice. Petruzzeli buried the wide-open backhander, just minutes after teammates Derek Lodermeier and Owen Grant couldn’t convert in similar situations.

The Eagles, however, showed plenty of resilience. The freshman-dominated second line combined for three goals, earning the high praise York has placed on them in recent games.

With eight minutes left in the opening period, Hutsko attempted to set up teammate Connor Moore for a slapshot. Moore missed, though, so Hutsko fought to regain possession and took it upon himself to score. The junior got assists from Räsänen and Grando, unleashing a wrister to cut the lead in half.

Six minutes later, Hutsko and Grando set up Räsänen for the equalizer. A costly Vermont turnover in its own defensive third led to an open shot for Räsänen, who converted after the Catamounts defenders were late in responding.

With the momentum completely flipped in the Eagles favor, it didn’t take long for them to tally again. After pinning Vermont back in their own third for much of the start of the second period, Hutsko broke through at the nine-minute mark. He coasted into the right slot after beating three defenders and scored, finishing past sprawled-out goaltender Stefanos Lekkas.

Lekkas turned in a phenomenal effort throughout, almost single-handedly keeping the Catamounts in the game. The sophomore keeper faced more than twice the number of shots as his Eagles counterpart, piling up 41 saves—including several highlight reel stops. BC set a new season-high for shots, but faced a brick wall in Lekkas, who came out and even made a few aggressive, ‘make yourself big’ saves in the third.

But he couldn’t come up with a save on Räsänen’s game-winner. The Catamounts ended the game on a power play and a 6-on-4 advantage, but couldn’t get a clean look and time expired.

Sitting atop the Hockey East standings with a near-spotless 5-1 conference record,  the Eagles have a potent second line of freshmen that are just coming into their own. It bodes well moving forward, especially entering the heart of their conference schedule. Back at .500, BC has proved it can hang in the tough, nail-biter games.