Home » In Season Opener, Eagles Pull Away From Bryant 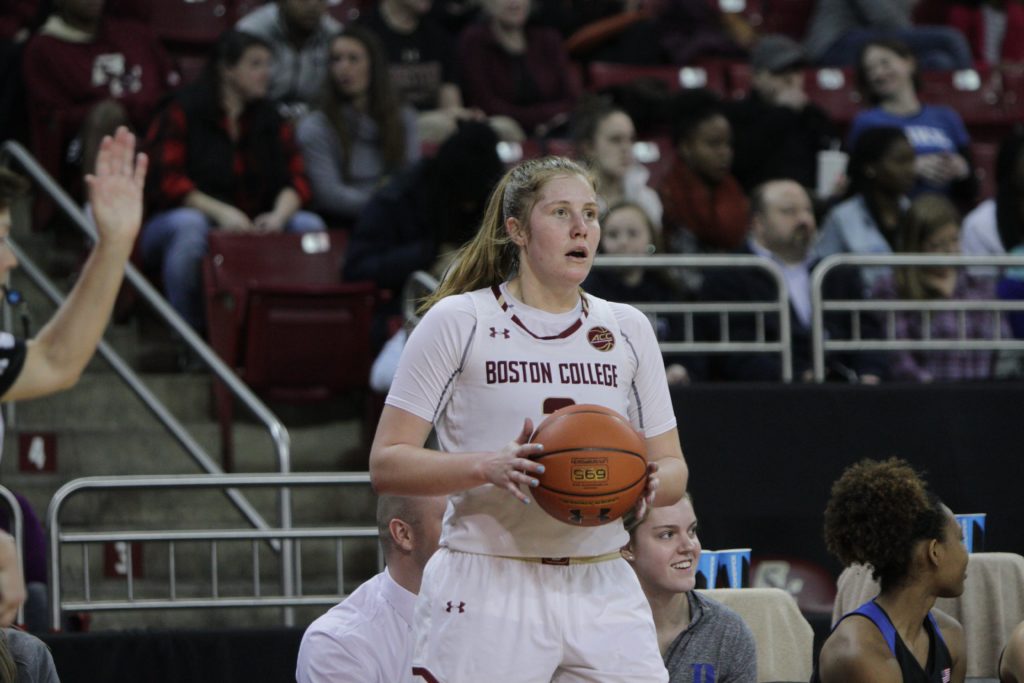 In Season Opener, Eagles Pull Away From Bryant

On a chilly November afternoon, Lower Campus bustled with students huddling together for warmth, as staving off the year’s first low temperatures was of grave concern for many. Meanwhile, Boston College women’s basketball opened up its season in dominant fashion with a victory over Bryant, 65-42.

Erik Johnson’s Eagles (1-0) looked strong on offense in the game’s early going. Sophomore Georgia Pineau started the scoring off early with a mid-range shot high off the glass and later converted a tough layup off of an offensive rebound, in addition to a corner 3-pointer. The 6-foot-1 Australian forward was dominant for BC in Friday’s contest, tallying 18 points on a 6-for-9 day from the field to go along with eight rebounds.

“I’m willing to play with whatever the team needs in the moment,” Pineau said. “That’s what I think is a great thing about our team, everyone is willing to do their role.”

Aided further by a 3-pointer from freshman guard Milan Bolden-Morris and sloppiness from the Bulldogs (0-1), the Eagles had a 12-8 lead by the time Mary Burke called Bryant’s first timeout.

BC emerged from the timeout with an impressive defensive stand that included a monster block from Katie Quandt, her first of two, and a forced turnover that Pineau would turn into two points on the other end. Excellent ball movement and rebounding was a key factor in the Eagles opening up a lead as large as 9 points and ending the first frame with a 20-13 lead.

The beginning of the next quarter did not go exceptionally smooth for the Eagles, as they failed to convert on a handful of early sequences and turned the ball over on multiple occasions. BC finished with 11 turnovers, a number it will certainly look to reduce as the season goes on.

Johnson seemed to express this same sentiment following the game.

“By no means was this a great game for us,” he said. “We’ve got a long way to go in terms of flow and attention to detail.”

In spite of some early incohesion, the Eagles would stabilize. The team secured possession after an impressive defensive stand and grad student Andie Anastos found herself directing traffic against a suddenly confident Bulldogs defense. In spite of pressure, Anastos wove a pretty pass to Martina Mossetti at the top of the key. Mossetti, who ended the day with 13 points, nailed a wide-open 3-pointer to give BC a commanding lead heading into a media timeout.

Freshman Sydney Lowery airballed her first two 3-point attempts in the first quarter, but remained focused and became a key cog in the Eagles’ win. Lowery looked more than composed in the second quarter, commanding the glass and securing multiple impressive rebounds. Lowery would finish with 13 points and 6 rebounds in her NCAA debut.

Bolden-Morris would add two more 3-point shots to her equally impressive debut (11 points, nine rebounds), and efficient ball movement and free throw shooting continued for BC, as the first half closed with the Eagles up, 35-21.

Bryant would continue to look sloppy to open the third, and BC took supreme advantage. Following a missed Bulldogs layup, the Eagles were able to secure two offensive rebounds, one by a diving Bolden-Morris following an errant three and another by Pineau on a missed free throw, who put up a shot and converted one of the ensuing free throws.

Foul trouble persisted for the Bulldogs, but Bryant’s Sydney Holloway was able to atone for her personal mistakes by turning a steal into two points, and a pair of free throws from Bryant guard Naomi Ashley cut the Eagles’ lead to a dozen. In need of a momentum shift, BC turned to Lowery, who drove to the basket and converted at the free-throw line to record a 3-point play and restore order to the BC offense.

With two minutes left in the third, the Eagles again found their lead trimmed, this time to nine. Following a close range shot from Bryant’s Hannah Scanlan, it was again Lowery who would provide stability to BC, this time with a three ball from the left wing. With order restored, BC closed the third with a 47-36 advantage.

BC opened the fourth on an 8-0 run thanks to a pair of perimeter shots from Bolden-Morris and sophomore guard Taylor Ortlepp, separated by a mid range shot from Mosetti. Palmer briefly stopped the scoring spree, but a hook-shot from Pineau started a subsequent 6-2 run for the Eagles.

Ashley continued to impress as the Bulldogs faltered. Her efforts on the boards, mid-range game, and ability to penetrate kept Bryant afloat late. A Bryant squad that looked devoid of energy for most of the second half was momentarily brought alive by her efforts from time to time. Though it proved for naught, Ashley’s performance was certainly a bright spot in a rough afternoon for the visitors, as she finished the day with a team-high 12 points and nine rebounds.

Despite Ashley’s efforts, the rest of the fourth would prove to be more of the same. The Eagles opened up a lead as large as 23 thanks to sound defense and continued excellence on the boards and would finish the afternoon out-rebounding the Bulldogs 39-33.

“It’s nice to open up with a win,” Johnson said. “This team clearly came together at the right times.”