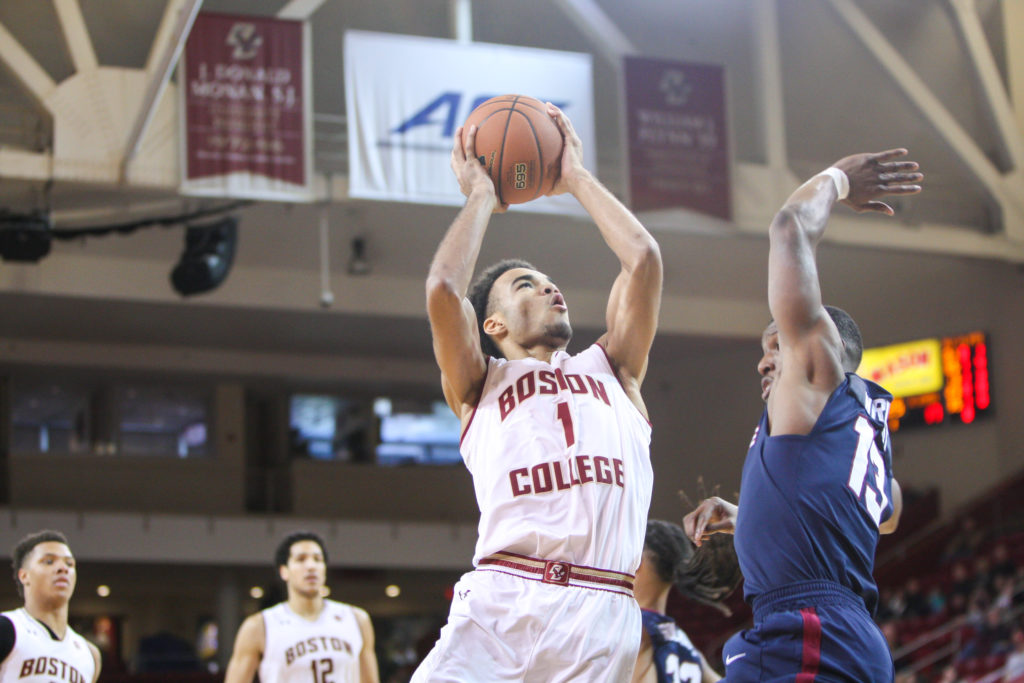 On Sunday afternoon, Boston College men’s basketball utterly dominated South Carolina State, 91-52. This win, coming off the heels of a blowout win Friday night, is a sign that head coach Jim Christian’s improved team looks capable of handily beating weak opponents—somewhat of a problem in recent years. At the moment, there appears to be plenty of optimism surrounding BC (2-0), and Sunday’s game was indicative of the full-extent of the Eagles’ capabilities on both ends of the floor.

1) Mitchell More Than Just an Energizer

Steffon Mitchell was a breakout star against the Bulldogs (0-2), coming off the bench for the Eagles. The freshman was 7-of-9 from the field, and recorded a game-high 21 points. Mitchell moved the ball around and knocked down his shots when given the chance. He scored on the interior, driving to the lane multiple times throughout the game. Not to mention that he hit all three of his 3-point attempts. Mitchell also brought energy and defensive prowess to the floor—essentially what made him a coveted recruit in high school—picking up three steals and seven offensive rebounds. When Mitchell was on the court, BC outscored SC State by 34 points.

Early on, after trailing by three, BC set the tone for the game, going on a 21-2 run—one that consisted of five-straight 3-pointers. The Eagles’ ball movement was impeccable, as possession sometimes changed hands eight or nine times before someone finally got an open look. Ky Bowman and Jerome Robinson took a back seat, in terms of scoring, but totaled 11 out of BC’s 18 assists. Christian emphasized that this number easily could have been higher.

“There’s just a really good feel for where guys were and guys seeing and making plays,” he said. “Eighteen assists could have easily been 25 or 26.”

Bowman drew a lot of defensive attention, and intelligently facilitated the ball. The sophomore point guard showcased great chemistry with Nik Popovic. Bowman found the 6-foot-11 center wide open on a pair of designed pick and rolls, both of which culminated in Popovic dunks. The Eagles’ execution was stellar, and Bowman made the Bulldogs’ defense pay whenever they double-teamed him on the perimeter.

The entire game, it seemed like the Eagles forced SC state into taking contested looks late in the shot clock. The Bulldogs tried running their offense through pass-first guard Tyvoris Solomon, with little luck. They also attempted more than a few pick and rolls, as well as to space the floor, but were ultimately forced to pass out of difficult situations due to the Eagles’ physically imposing defense. More often than not, the Bulldogs’ Damani Applewhite (0-of-4) or Donte Wright (1-of-6) had to chuck up contested fadeaways late in the shot clock. BC rarely gave up any uncontested looks, holding SC State to a mere 32.1 percent from the field, and 23.1 percent from deep. Popovic and Teddy Hawkins were defensive staples in the game for the Eagles. Hawkins alone racked up 10 defensive boards, which allowed BC to run out and attack the basket in transition.

4) Too Many Turnovers and Personal Fouls

BC was very stingy on defense, however, it was often too physical. The Eagles committed 18 personal fouls by the game’s end. Considering this was such a commanding win for the Eagles, the stat shouldn’t be overanalyzed, but overall, the team was a bit undisciplined defending second-chance shots. BC also turned the ball over 15 times—seven more than it did in its season-opening win over Maine—but there isn’t a sole player responsible, as no one committed more than two turnovers in the game.