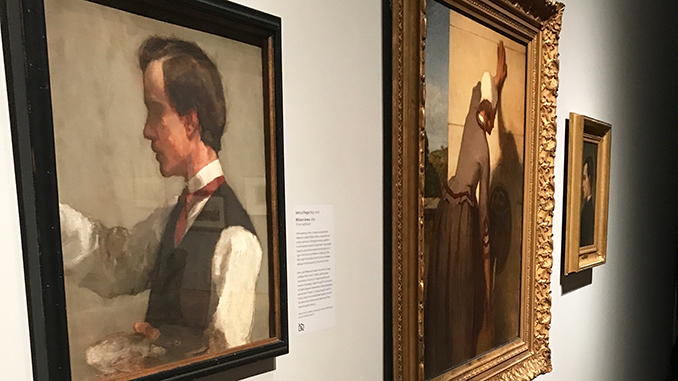 Since Oct. 19, works by American artists John La Farge, John Singer Sargent, and James McNeill Whistler have been exhibited at the Isabella Stewart Gardner Museum in Boston. The exhibit, Henry James and American Painting, offers an insight into the deep and caring relationship shared between the artists and Gardner, a patron to the arts.

This exhibition of love and friendship commenced at the Morgan Library and Museum, but at the Gardner Museum, the exhibition was geared specifically to Gardner and James relationship.

“We were really trying to demonstrate how these artists, writers, and patrons of the art had such a wonderful and sharing relationship, and they had such an inspirational power upon each other.” said Kathy Sharpless, the director of marketing and communications for the museum.

“This theme still exists today, as the Isabella Stewart Gardner Museum hosts ‘neighborhood luminaries’ who want to share and inspire others with the essence of their work.”

The exhibit is a collection of over 50 rich oil paintings, drawings, deep watercolors, antiquated photographs, and affectionate letters, and it is fashioned after the grand salons of many artists of the time, offering an insight into their work environment.

Upon entrance into the exhibit, an ornate oil painting by Sargent depicts Gardner in a manner not typical of the time, accentuating her waistline by draping a shawl and necklaces around this part of her body. Hidden from the public for the majority of its existence, the painting was a controversial and risqué piece for its time.

Resting on the wall directly across the room from the painting of Isabella, another Sargent work details her eloquently posed friend, Henry James.

In this space, James’s letters to Isabella are also displayed. James’s ornate handwriting fills up the pages completely, even the margins, lending the letters an artistic appearance. As time progressed, these letters grew largely more loving, as Isabella and Henry James’s friendship deepened.

One letter from James begins: “My dear Mrs. Gardner … so indelible is the image which you imprint upon the consciousness of your fellow men.”

Often, James would take composites of people that he was close to and familiar settings and include them in his novels. The Palazzo Barbaro—the place where the Gardner and her family would sojourn in Venice with the Curtis family, a Boston expatriate couple—was the framework for the palace in his work, The Wings of the Dove. The palace was also the focus of Sargent’s painting entitled An Interior in Venice, which hangs just across the wall, allowing viewers to pair James’s description with Sargent’s image.

Two more brilliant Sargent paintings are displayed next to An Interior in Venice that, in the words of Sharpless, display “the underbelly of Venetian society.” These works, titled, Venetian Interior and Venetian Women in the Palazzo Rezzonico, portray the impoverished side of Venice, a topic not typically explored.

The exhibit also features Sargent’s watercolor paintings, a complement to to the heavier oil paintings. Sargent’s Santa Maria della Salute, The Bridge of Sighs, and San Giuseppe di Castello, Venice, offer bursts of color depicting boats on Venetian waters while adding feelings of lightness and joviality to the exhibition.

A talented artist and friend to James, La Farge depicted both James and his brother, William, in their younger years. These life-capturing portraits, each detailing the men in profile, hang beside each other, revealing that both the James brothers had a love for the arts.

The reality of everyday life for Gardner and James also appears in this exhibit as photo albums compiled by Gardner. These photographs portray the life of a gracious art patron from a first-hand account, as she chronicled many of her respites to Venetia where her love for European culture flourished.

According to Sharpless, the public “reacted very positively to the exhibit.” Not only have the works of Sargent and Whistler and the salon-like ambiance of the exhibit enchanted visitors, the subject matter of the exhibit itself has struck a chord.

“The theme of human and personal relations between Gardner and her friends has resonated positively with museum-goers,” Sharpless said.

The salon atmosphere in combination with excerpts from Henry James’s literary feats as wall text, bring life to James’s novels, creating a further connection between the visual and written arts.

As James writes in his work,The Art of Fiction, “The analogy between the art of the painter and the art of the novelist is, so far as I am able to see, complete … They may learn from each other, they may explain and sustain. Their cause is the same, and the honour of one is the honour of another.”