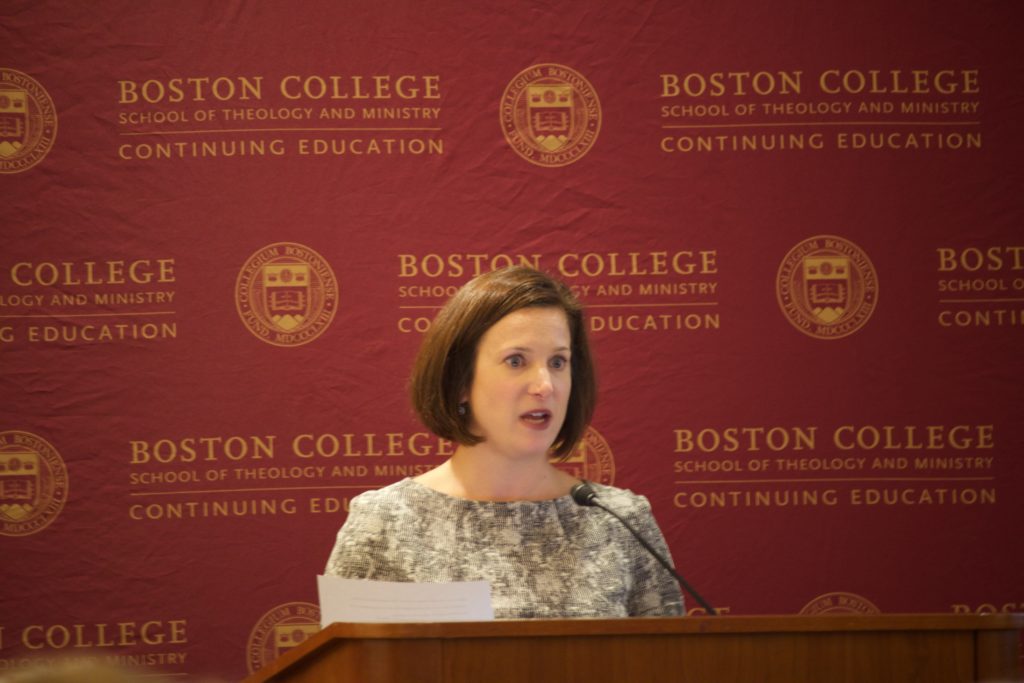 Kristin Heyer, a theology professor at Boston College, gave a lecture on the Catholic ethic of immigration as part of BC’s School of Theology and Ministry Lecture series on Tuesday night. Heyer’s research focus is on theological ethics, and she has published several books on immigration in Catholicism, including Kinship Across Borders: A Christian Ethic of Immigration.

Heyer said that a lecture on a Catholic ethic of immigration was timely and important, while expressing hope to offer a counter narrative to what dominates political discussion today.

“I think the time is ripe here in the United States for … Catholic ethics to shape discourse about immigration,” Heyer said.

Heyer observed that significant changes to the U.S. immigration system brought about by President Donald Trump focus on national security, citing the border wall between the U.S. and Mexico, selective travel bans, and expanding those targeted for deportation to include anyone immigration officers judged to pose a risk to public safety, as examples. She blamed this inflammatory rhetoric and these policies for sowing fear in immigrant communities and eroding civic life. Citing stories of the deported at aid centers, Heyer further argued that these measures threaten to harm already vulnerable asylum seekers and divide families of mixed immigration status.

Specifically, Heyer recalled a student who was confronted by ICE agents a month after her high school graduation. The student pleaded with the agent to let him stay, telling him that he would be starting college in a month on a special scholarship. The agent said he would let the student go if he told the agent where his father was.

“I stood there in complete disbelief,” the student said. “I sold out my dad for an education.”

Experiences such as these have greatly shaped Heyer’s reflection on the Christian narrative on migration. Although she understands the need for balanced immigration, Heyer believes that the growing threats to human dignity indicate the urgency for the system’s overhaul.

“The U.S. is a country that prides itself on hospitality,” Heyer said. “Yet, issues of immigration are talking within the context of national security and economic benefits or costs rather than human rights.”

Heyer argues, however, that Catholic ethic on immigration should not be guided by these three fears. Rather, it must be guided by compassion and respect for everyone as God’s children, an assertion that can be found in the Bible.

“The story of Jewish and Christian pilgrim communities is one of migration, diaspora, and the call to live accordingly,” Heyer said. “Indeed, after the commandment to worship one God, no moral imperative is repeated more frequently … than the commandment to care for a stranger.”

Heyer said that Jesus’s family becomes the archetype of every refugee family when they flee to Egypt to escape King Herod, who was planning to kill Jesus. In the gospels, Jesus frequently identifies with the marginalized, including the sick, sinners, and the poor. Jesus is born in a manger among shepherds and spends his life bringing good news to the poor and released the oppressed. Heyer argued that Catholics must follow that example when it comes to immigration because the Scriptures clearly instruct Catholics to care for marginalized persons.

In particular, Heyer pointed to the Good Samaritan as a story that particularly embodies the Catholic ethic on immigration. In the parable, a perceived enemy (the Samaritan) is the one who offers hospitality and compassion to the man in the ditch, not a priest or a Levite. Whereas the priest and Levite didn’t allow themselves to be affected by the man’s plight, the Samaritan saw the man as a fellow human being. Rather than seeing immigration as an “us vs. them” story, Heyer encouraged the audience to see the issue as a brother or sister suffering.

“[Pope Francis] lamented that globalization of indifference and international structures treat migrants as pawns on a chessboard,” Heyer said.

Catholic social thought was comprised of treating all persons as sacred children of God and guaranteeing protection of human dignity and rights, according to Heyer. This extends beyond the treatment of immigrants at the border. Heyer argued that America’s broken immigration system, combined with an increasingly global economy and individualization of society, resulted in laborers being stripped of their human dignity. She cited the Southern Poverty Law Center’s interviews with laborers, who felt like they were viewed as disposable workers.

Heyer ended her lecture by discussing solutions, noting that there were signs of hope for society to implement a more Catholic ethic on immigration. She first pointed to Pope Francis’s reaching out to refugees and non-Catholics and the Catholic Church offering sanctuary for refugees. She emphasized the importance of building bridges between different people to create a “culture of encounter.” Seeking common ground with those around us and learning a variety of perspectives are very important to making sure all human’s dignity and rights are preserved.

“Amid the pervasive misinformation that clouds the exploitation of immigrants, a Catholic ethic of ‘Kinship Across Borders’ offers guideposts from exclusion to solidarity,” Heyer said. “We who are settled must realize that even being adrift in a sea of indifference is a privilege.”