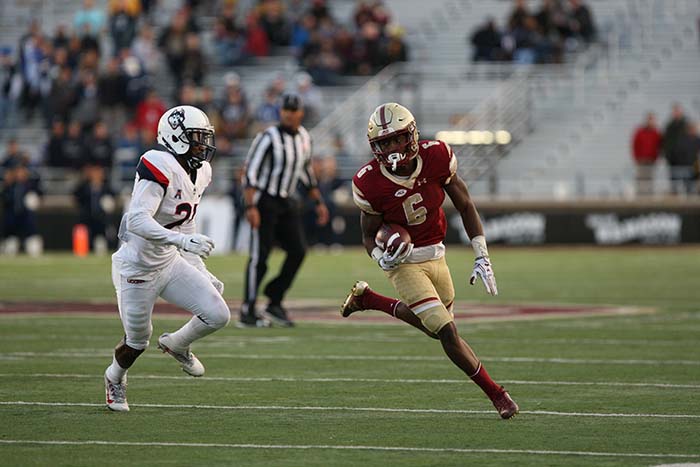 It was a move he had made countless times before, just a simple cut and change of direction needed to elude one last defender and pick up a key first down. But this time was different. Crumpled in a heap of pain—his knee having buckled inward in a manner that will never be considered normal—Anthony Brown lay on the turf near the 10-yard line, forced to face the reality that his season had just come to an abrupt conclusion.

And for Boston College (5-5, 3-4 Atlantic Coast), the aftermath of the injury forced the Eagles to recognize a similar reality, with the promise of their recent winning streak marred by a significant talent deficit at the most crucial position in the sport.

After Brown’s injury—which will require season-ending surgery in the near future—the Eagles finished the remainder of their narrow 17-14 loss against No. 23 North Carolina State (7-3, 5-1) with a one-dimensional offense. Though A.J. Dillon made that strategy plausible—finishing the contest with 196 rushing yards on a whopping 36 carries, becoming just the 12th freshman in ACC history to top 1,000 yards rushing—it became immediately clear that the team’s offense had been severely handicapped in terms of playcalling and explosiveness down the field.

Darius Wade finished the game under center, completing just 8-of-15 passes for 82 yards and taking several sacks on plays where he simply held onto the ball for far too long. Though Brown had struggled with accuracy at times, it was easy to take for granted how quickly the redshirt freshman got rid of the ball, preventing his offensive line from needing to block elite pass rushers for five seconds. Additionally, Wade’s accuracy on passes beyond checkdowns remained sporadic.

Despite this clear limitation at quarterback, Addazio spent Monday’s press conference professing his belief that the team doesn’t need to radically alter its passing offense.

“[We’re] not really looking for a game manager, to be honest with you,” the head coach said. “We’re going to attack, just like we have been.”

But while the overall gameplan might not change, Addazio is still considering all of his options at the quarterback position for Saturday night’s matchup with the University of Connecticut (3-7, 2-5 American) at Fenway Park. Serious playing time for Wade, burning E.J. Perry’s redshirt or even turning to Jeff Smith under center are all currently possible.

“All things are on the table,” he said. “Whatever it takes to be—to play at the highest level that we need to play at over the course of this week and leading up to Saturday. Simple as that.”

Fortunately for BC, at least on paper, the matchup against UConn appears to be perfect for a team looking to address major offensive question marks. Coach Randy Edsall’s team enters the primetime contest as 21.5-point underdogs and the program has never defeated BC.

In his second stint coaching in Storrs—after an eleven-year tenure ending in 2011, marked by five bowl appearances—Edsall holds the reins for a struggling team. UConn has surrendered an average of 48 points in its seven losses, with an embarrassing average margin of defeat of 23.6 points. On the other side of the ball, the team has struggled mightily to score in the red zone, scoring on just 75 percent of its trips inside the opponent’s 20-yard line, 113th in the country.

The Huskies are in the midst of facing a quarterbacking change of their own. Two weeks ago, in a loss to the University of South Florida, senior signal caller Bryant Shirreffs suffered a bad concussion and missed last week’s loss to the University of Central Florida. This week, Edsall announced that the concussion will be season-ending. Before the injury, after claiming the quarterback job during the season opening win over Holy Cross, Shirreffs was having his best collegiate season. He’ll finish the year with 2287 yards passing, completing 65.8 percent of his throws for 14 touchdowns—all career highs.

David Pindell, a junior college transfer who actually won the starting job over the summer, before losing it to Shirreffs during the first week, started last week’s game. He completed 18-of-31 passes for 201 yards and 2 touchdowns, also picking up 96 yards and one score on the ground. Pindell is much more athletic than Shirreffs, which greatly expands the quarterback run concepts available to Edsall, an especially noteworthy fact given how poorly BC has defended the quarterback run this season. On the downside, Pindell’s accuracy downfield lags behind Shirreffs’, which may restrict UConn’s vertical passing game.

As a result, expect the Huskies to consistently focus on their ground game. In addition to Pindell, Edsall turned to the duo of Kevin Mensah and Arkeel Newsome last week, with the pair racking up a combined 84 yards on 20 carries. Just a freshman, Mensah leads the Huskies with 422 rushing yards and has 48 carries over the past three weeks. Newsome is an explosive senior, who returned last week after missing the prior two games with an injury. He has the capacity to break any outside run for huge gains, making it crucial for the Eagles to set the edge on Saturday night.

But this season, the Huskies have really struggled on the ground, only picking up five or more yards on 32.7 percent of their attempts, 118th nationally. They have been stopped at or behind the line of scrimmage on 23.3 percent of their carries, 115th nationally, indicating a complete inability to move the defensive front. With any luck, the extra attention defenses must pay to Pindell’s scampering ability can open more substantial holes for his tailbacks.

Newsome also ranks second on the team in receiving yards with 467. His ability to not only catch screens, but also to run a receiver’s routes makes him a very dangerous player in open space, particular if he gets matched up against a linebacker. Newsome is a key piece in a diverse group of UConn receivers. The Huskies have seven players with at least 210 receiving yards, led by junior wideout Hergy Mayala, who has totaled 519 yards and five touchdowns—6-foot-5 junior Aaron McClean offers Pindell a big-bodied target, capable of reeling in passes in traffic or on jump balls.

On Saturday, look for BC to focus a lot of defensive attention on neutralizing Pindell as a rushing threat. Through intense focus on gap responsibilities and a determination to not get fooled by play fakes on option runs, the Eagles can force the Huskies to rely on the portion of their running attack that has been far less successful this season. Even with Kamrin Moore potentially out of the lineup, BC’s secondary will likely be able to blanket UConn’s receivers, meaning that a solid effort from the front seven against the run could completely snuff out the Huskies’ entire offense.

That doesn’t bode well for Edsall’s team because in order to win, UConn needs to score a ton of points to make up for its woefully bad defense. The Huskies have allowed 375.3 passing yards per game, worst in the country by 69 yards, showing absolutely no ability to cover any type of receiver. They rarely force turnovers and have allowed opponents to convert 49.4 percent of their third down attempts, fourth worst in the country.

If Edsall’s defense has anything that could be considered a strength, it would be against the run. 315-pound defensive tackle Folorunso Fatukasi clogs the middle of the field, often drawing double teams. Linebacker Junior Joseph leads the team with 81 tackles, flying towards the line of scrimmage to meet the running back in the hole. But despite these useful players, the Huskies have still surrendered 175.5 yards per game on the ground.

For BC, this defense’s complete weakness across the board means that it can likely stick to the gameplan of giving Dillon 30 carries. The freshman bulldozer should have little issue finding creases in the Huskies’ front seven, provided he avoids Fatukasi. A successful run game will allow the Eagles to slowly ease Wade into the starter’s role, opening up some easy play action throws and minimizing long third downs. If he struggles, Perry could see time under center or the team might opt for a dose of option football with Smith as the triggerman. The former starting quarterback should definitely see a fair number of touches throughout the game.

BC will enter Fenway much the same way it did against Notre Dame two years ago—with a significant question mark at quarterback. But this time, struggling is not an option. A victory Saturday secures bowl eligibility, while a loss would represent a failure of the highest magnitude.

Fortunately for the Eagles, a letdown doesn’t seem too likely, especially given how Addazio sees the matchup.

“As far as I’m concerned, we’re playing the Super Bowl here on Saturday,” Addazio said. “That’s the way I view this right now.” 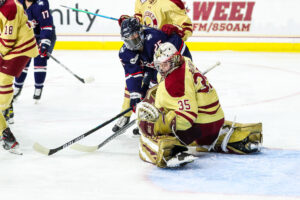