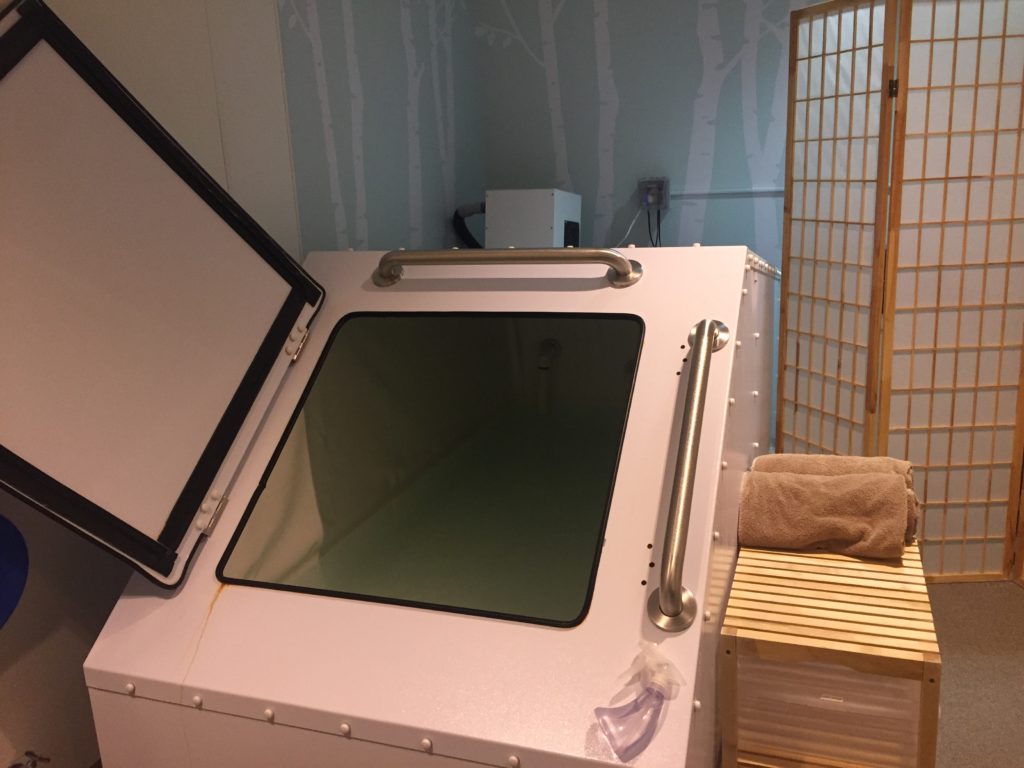 You are floating, suspended in the middle of apparent nothingness. Telling exactly where your body exactly ends is a little difficult, as is deciding whether your eyes are open or closed—it is pitch black either way. It’s a strange feeling, mostly because it isn’t really a feeling at all.

Some call it sensory deprivation, a unique form of therapy where the participant submerges themselves in a tank of heavily concentrated salt water perfectly set to one’s body temperature. Once in, the participant lays back, and simply floats in complete darkness. For this reason, others call it floating.

Sara Garvin first heard about floating through a friend who had posted an article on the subject. Garvin, a successful massage therapist who owned her own Somerville practice, was intrigued. After a “career-wrecking injury” fractured her spine, leaving her with worsening neck and shoulder issues, Garvin knew that it was time for something new, and decided to give floating a try.

Much to her surprise, there were no businesses in the Boston area that offered floating. But Garvin was determined, so she decided to visit some family in Montreal, where she could also visit Ovarium—a famed, decades-old float and massage therapy center. And, although Garvin was “excited and motivated,” not to mention well-versed in other forms of water therapy, floating was unlike anything she had experienced before.

“I had, as I was floating, I had this sensation that all of my limbs were drifting away, which kind of gave me a moment of anxiety, but I was like ‘Let’s see what happens,’” Garvin said. “So I had a really interesting first float actually.”

When she emerged, colors were unusually bright, and Garvin had the urge to do something tactile—in this case knitting. But she was hooked, and started voyaging to centers in Connecticut that offered the treatment, oftentimes bringing her more “skeptical” husband, Colin Roald, along with her. With each trip, the couple conducted research of sorts, deciding if they could fill the hole that Garvin had found in the world of Boston’s alternative therapies.

Eventually the two attended the annual float convention held in Portland, Ore., where they learned from, and made important contacts with, people already embedded within the floating industry. Then they decided to go for it, learning the ropes of float solutions and sanitation while they looked for the perfect property on which to build their practice.

After searching throughout the Boston area, Garvin found a location in Somerville’s Magoun Square, and the process of opening FLOAT Boston truly began. While getting through the permitting and inspectional challenges that all small businesses face—as floating was a completely foreign concept to most officials—Garvin sound success in her social media outreach. After settling on the idea, Garvin immediately built an online and social media presence around FLOAT, garnering a strong group of “core people” who felt “really invested in the project.”

These core followers were able to spread the news about FLOAT through word of mouth, a tactic that Garvin noted was very effective when introducing something like floating to a city where the therapy is largely unknown.

“Word of mouth is the way to get things like this out there,” Garvin said. “There is only so much that I [as a business owner] can say … but if your friend said, ‘This is really cool and this helped me,’ you’re going to put so much more stock into what your friend said.

So in 2015, Garvin and Roald opened FLOAT Boston to the public, a bright and airy spa-like space painted a calming shade of light blue. Inside were four tanks—two traditional sized Escape Tanks, and two larger Summer Sky Tanks. The tanks stretch over seven feet long, the first being simpler, like a giant, industrial ice container, and the second taller with glowing lights and a ceiling that features twinkling constellations. Both kinds of tanks contain over a foot of a water solution containing over 850 pounds of Epsom salt—a concentration denser than the Dead Sea.

As Garvin watched customers come in looking skeptical and leave looking unbelievably relaxed and calm, she knew that floating was catching on and creating that special feeling.

“For some people it’s really surprising,” Garvin said. “Sometimes they don’t know what to do with that feeling because they’ve never experienced it before, or because it’s been so long that they’ve forgotten.

“You just feel really grounded, like you’re not worried or anxious about what’s coming next, you’re just right in the moment and ready and open,” Garvin said.

But this state not only appeals to everyone from regular people to professional athletes, Garvin noted that it also benefits people suffering from chronic bouts of high stress—people like students. Floating can aid in “focus” and information retention by creating a “centering effect.” But if you need a jolt of energy, Garvin explained how floating can help with that too.

“[Floating] sort of gives you what you need,” Garvin said. “It either de-stresses and helps you relax, or it invigorates you if you need that.”

And even if what you need is nothing at all, floating just might be the answer.