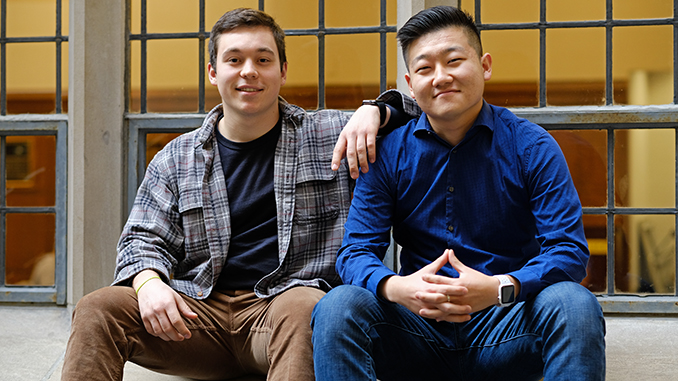 It’s generally understood that college is a time for embracing unfamiliar experiences. Dan Marino and Ben Li, both CSOM ’19, really took this sentiment to heart. Instead of looking to get involved with pre-existing opportunities on campus, they decided to create their own opportunities from the ground up. Both being interested in entrepreneurship, Marino and Li saw no better way to pursue their passions than by jumping into them head first. During the first semester of their freshman year, they began the process of creating a company now known as Venu.

The two began their collaboration when Marino thought of an idea in which he saw potential, but was looking to gain another perspective from someone who shared his interest in the business world. Li was the only other person he could always count on to attend startup and entrepreneurship events at Boston College, and thus the person he thought should join him in his efforts to develop the company.

Venu is an entity that aims to improve concert-goers’ experiences by providing them with rewards for their loyalty to an artist. As Marino observes, an artist’s interest in his or her fans is consistent and reliable, but a fan’s interest in an artist can be temporary and unpredictable. A dynamic of reciprocity is needed between these two parties in order for both to benefit. The way in which Marino saw this could be accomplished was through his app. The premise of the app is to gather information on its users, the fans, such as what they want more of from the musician. Artists will then use this data when formulating strategies to increase their sales of concert tickets, merchandise, and albums. The users, in turn, will receive rewards as they provide this valuable knowledge. These rewards will include voting on the set lists at concerts, listening to a new song 24 hours before it is released, accessing exclusive content or live streams, and receiving seat upgrades. Venu serves as the perfect middleman since it provides both the musicians and their followers with what they want.

“The major premise behind Venu is that if artists know who their most valuable fans are and have access to them, they can do amazing things to engage fans, create more loyalty, and ultimately create surreal experiences for their audience,” Marino said.

Marino and Li hope to release the first version of the app by early 2018. In order to reach this goal, they have had to assemble a strong enough network of support to carry them there. Venu works with a rather unique metaphor that compares the ideal business team to a wheel. This model is something that they have referred to constantly when evaluating those involved with their corporation.

“Each person on the team is supposed to be a different spoke in the wheel,” Marino said. “When someone is too similar to the other, there’s essentially too many people of the same kind, not enough different spokes in the wheel to make the wheel strong and well-rounded. Without the proper amount of spokes, your wheel will fail and collapse. Build the right team, and you’ll be able to get anywhere you need to go.”

They didn’t always have the most highly functioning “wheel,” however. According to Marino, the progression of Venu was set back by about seven or eight months because they were not working with individuals capable of contributing to what the company needed in order to succeed. They have since made alterations to their team and are on their way to where they want to be.

“This summer, we realized who the best kind of people to work with are and so we’ve seen a ton of growth and we’re moving really fast at this point now, more than we ever have been, just because we learned our lessons,” Marino said.

According to Marino, the first step in developing an effective team is finding people of integrity, and then ensuring that they possess skills that are valuable to the company. Venu is tech-based, but neither Li nor Marino are technically inclined themselves—they specialize in the business side of things. This required them to recruit individuals who could bring that integral angle to the table. By attending various networking events and making connections with those interested in the tech world, they have assembled what they see as an efficient network of support surrounding Venu. Those involved with the company include undergraduates from BC, and other individuals whom Marino and Li have met while at various networking events.

Marino and Li have turned to the resources on campus to strengthen their efforts. One of these includes The Edmund H. Shea, Jr. Center for Entrepreneurship, which aims to promote the entrepreneurial endeavors of students, and has been an integral part of Venu’s development. The Elevator Pitch Competition is an annual event organized by the Shea Center in which some of the brightest undergraduates gather to deliver their business ideas to professional venture capitalists in under 60 seconds. This competition is a perfect portrayal of Marino and Li’s rapid progress in their ability to communicate Venu’s vision.

The two first competed in it during their freshman year but lost during the final round. After a year spent solidifying the strategies they would use to gain support from those in the business world, they came back to make their elevator pitch a second time, and won the competition. According to Marino and Li, the ability to use the event as a networking opportunity was the biggest victory of all.

Another on-campus resource that has proved to be extremely helpful throughout this entire process is John Gallaugher, a professor in the computer science department. Marino and Li first connected with Gallaugher during their freshman year, when they both took his Computers in Management class. Still serving as a mentor to Marino and Li, Gallaugher recognizes the many measures that they have taken to found what could one day be a very successful corporation.

“I really think that the most significant thing [when starting a business] is seeing that tenacity and that commitment to an idea,” Gallaugher said. “Those guys, they’ve learned skills, met with individuals, they’ve got folks that are interested in partnering with them; those are all the things that you want.”

The original concept of Venu actually came about from an assignment in Gallaugher’s class to formulate a business idea and pitch it to their peers. With many adjustments made to the company since then, the only aspect that has remained the same up until now is the name. The extreme alteration of the startup’s original goal can be credited to Marino and Li’s ability to recognize a more important issue in need of a solution.

Some off-campus resources also played a key role in getting Venu to where it is today. BC alumni such as Tom Coburn, the founder of Jebbit and BC ’13, and Andrew Miller, BC ’11, CGSOM and BC Law ’15, who is now a successful startup lawyer in California, have provided crucial feedback and insight on what turns an idea into an enterprise.

“Starting a company is like a roller coaster, you’re going to go through a lot of ups and downs and if we hadn’t kept [Coburn and Miller] in the loop and had them help us, we may have given up at the early stages,” Marino said.

Despite the unpredictability of this roller coaster, Marino and Li are in a place now where they are hopeful of a steady uphill climb. In order to construct the company in a way so that it might continue on this rise, they have had to make some sacrifices.

Marino and Li will not be studying abroad, like a good portion of students do their junior year, but will be remaining at BC to focus on developing Venu. According to Li, though the business has made some big leaps forward since its creation, they are not yet at the stage where they could function effectively in different time zones than one another, their team, and the artists with whom they are working. Marino and Li feel that this measure is completely necessary and believe there is plenty of time to travel abroad at another point in their lives.

Another action they have had to take to found Venu is channeling some of their personal funds into the development of the the company. According to Marino, they are “bootstrapping it.” Often in the initial stages of a startup, it’s advisable to refrain from accessing outside investors or sources of funds before the company has the traction to make use of it. To follow this procedure, Marino and Li have been supporting Venu completely out of pocket.

According to Marino and Li, all of these sacrifices are worth it no matter the outcome of Venu. They see this whole venture as a way to expand their understanding of the business world, and they believe there is no better time to start.

“The way we look at it is, starting a company is a win-win no matter what happens,” Marino said. “You’re going to learn a lot and meet great people, and have an awesome time while you’re at it.”

Throughout this entire process, Marino and Li have grown extremely close to one another and have a significant appreciation for what the other contributes to the vision and the progress that Venu has made.

“I’ve never seen someone who is so passionate and dedicated towards the project that both of us started,” Li said about Marino. “When you’re around someone with that energy, it’s hard even for you to feel tired.”

Marino emphasized the idea that a company without momentum isn’t going to accomplish anything. With Li’s focus and drive, those involved with Venu can maintain a consistently high ambition despite any obstacles they may face. Their hopes are high for Venu’s continuous expansion and they are enthusiastically anticipating the future.

“It’s taken some time to get to where we are now, but moving forward from this point, it’s full steam ahead,” Marino said. “We’re not giving up anytime soon.”