Home » A Love of Justice: Berry’s Search for Truth and Education 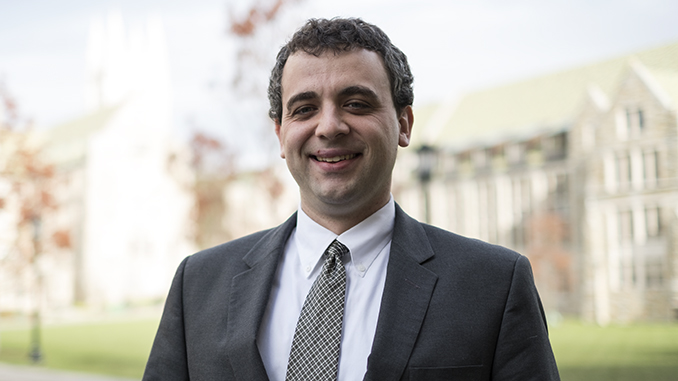 A Love of Justice: Berry’s Search for Truth and Education

When Matthew Berry was six years old, his grandfather gave him a book: One Hundred Wars that Changed World History. While most first graders wouldn’t be excited to get a book about history, Berry was obsessed with it. That was the beginning of his love for politics, one that led him to a doctorate in the field and a position as a visiting professor in Boston College’s political science department.

Although Berry says that politics has been of great interest to him since he was young, he didn’t originally plan to study it. For most of his life, Berry intended to be a high school teacher. When he entered high school himself, his plans for the future drastically changed. Berry planned to join the military after graduation instead of going to college until his girlfriend at the time, who is now his wife, urged him to apply to schools. After a successful senior year and college application process, Berry decided to enroll in school instead of the army.

Berry, a North Carolina native, attended Baylor University as a member of its honors program. It was an involved program in which students lived with and took classes with their peers. He credits some of his success to being surrounded by incredibly motivated and ambitious people during his formative years. Many of the students in the honors program came from diverse backgrounds, which contributed to their work ethic and game them a point of view that differed from many of the upper-class students enrolled at Baylor.

College was a transformative period of Berry’s life, not only academically, but spiritually. It was during his freshman year of college that Berry became interested in religion. Although he was not brought up in a religious home, Berry does consider himself a Christian, and has taught courses in Christian political thought.

During his time as an undergraduate, Berry was conflicted about what he wanted to pursue. He was interested in philosophy and poetry, and came to be interested in politics as a major and career in his junior year when he saw that it allows for a variety of readings and would allow him to pursue his interdisciplinary interest instead of narrowing down to one subject.

Berry came to Boston as a graduate student with his wife, also a graduate student at BC pursuing a Ph.D. in English. His shift from the South to Massachusetts was pleasant, but it had its challenges. The snow was a bit of a shock the first time a real Boston blizzard hit, but Berry found he enjoyed the city, and noted its accessibility is far greater than cities in Texas for people who enjoy walking over driving. He believes the people here are more honest, a possible contributing factor to forming more authentic relationships.

Berry credits the friendships he formed with other graduate students as being helpful when he began studying here. Although he acknowledges the incredible knowledge and intellect of BC’s professors, Berry believes that he learned the most from his peers in graduate school, especially those that were older than him. Throughout his time as a student at BC, Berry says that his political opinions changed often, and his peers and environment undoubtedly aided in his discovery of new modes of thought.

Berry has a gift with research, according to Robert Bartlett, a professor in the political science department who oversaw Berry’s dissertation.

“He’s a fine example of the kind of graduate students that we try to produce,” Bartlett said.

Berry is currently writing two books. One is on the topic of his dissertation: the enduring questions of justice in Aristotelian ethics. His second book is a study on the “intellectual predecessors of the modern far-right nationalist movement.” By studying the readings of 19th-century counter-Enlightenment and reactionary thinkers, Berry hopes to gain some insight on the right-wing extremists in American society today.

Berry mostly writes for his books on the weekends. Although he doesn’t usually get a break from work, Berry says that he enjoys doing it, since it doesn’t feel like a chore. After writing for the day, Berry will typically take his 2-year-old son to the park or watch a college football game.

Berry is particularly interested in why people think the way they do, not necessarily focusing on what they think. He has read the ideas of some modern far-right nationalist group members, and he was surprised by the fact that most are extremely well-educated and come from liberal families. His interest extends to liberal political theory, as well as its criticisms. He stressed the importance of trying to understand people even if we don’t agree with them, rather than dismissing their ideas as wrong.

“It seems to me the world is heading towards a crisis in that respect,” Berry said.

His colleagues recognize his dedication to excellence. Although he only had one course with Berry, Robert Faulkner, a professor in the political science department, says that they have remained close, and described him as a man dedicated to good politics and good morals. Berry has an energy and good humor that makes him a pleasurable person to work with. His intellect and personality are so impressive that Faulkner cannot pinpoint one conversation or memory that he favors over others—all of his conversations with Berry have been interesting and beneficial.

Berry loves his job as a visiting professor, and hopes to stay in academia as his career progresses. He currently works with freshmen as part of the Core Renewal course program, something he is passionate about. He enjoys his small seminar-style classes that foster discussion and involvement among his students. His interdisciplinary approach to learning is apparent in the way he teaches. In one of his current courses, How Democracies Die, Berry has presented history readings, Shakespeare, and sociological works. He also teaches Christian Political Thought, which discusses the relationship between church and state throughout history, from the Gospels to Martin Luther King, Jr. Next semester, he’ll tackle another freshmen-only course by running the lab portion of The History and Politics of Terrorism.

On top of teaching in the classroom, Berry loves meeting with interested students in office hours to discuss concepts further.

“I love that I can have more in-depth conversations with students in office hours,” Berry said.

While Berry loves that the students are invested and have strong opinions on the topics they discuss, he cautions against the dangers of becoming cynical. He recalls having a student approach him during office hours while he was teaching at the College of the Holy Cross. The student had just returned from an internship in Washington D.C., and was extremely disheartened by the attitude toward politics that he found there. While Berry talked with his student and worked through his worries, he acknowledges that it is a problem he has encountered.

“You don’t want to become cynical,” Berry said. “You want to keep that love of justice.”

Bartlett is confident in Berry’s character and ability. He explained that Berry has excellent scholarship, but is also an incredible teacher. While most professors need a few years to get comfortable teaching in a class full of students, Berry was a natural. As a graduate student, Berry was a teaching assistant in Bartlett’s How to Rule the World course. He was popular with the students there, and his success in and out of the classroom has extended to his post-doctoral work. Personally and professionally, Bartlett describes Berry as gregarious, charming, and warm.

Along with his “terrific sense of humor,” Bartlett notes Berry’s infectious laugh.

“There have been several occasions in which I’m walking down a hall and I hear his very particular laugh,” Bartlett said. “I know that Matt Berry is in the room.”

2 COMMENTS ON THIS POST To “A Love of Justice: Berry’s Search for Truth and Education”