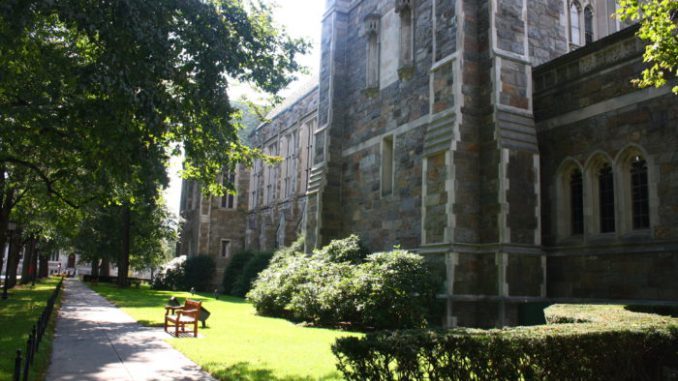 Rob Nixon, the Currie C. and Thomas A. Barron Family Professor in Humanities and Environment at Princeton University, gave a lecture on Thursday evening as part of the Park Street Corporation Speaker Series, which invites guests to speak about the intersections of health, humanities, and ethics.

Nixon noted that most environmental martyrdom occurs in the tropical regions of the globe, where inhabitants and environmental movements revolve around belief systems that emphasize a more spiritual relationship between human and nature. Therefore, he concluded, it is likely that the assassinations of these martyrs are not secular in nature. As an example, Nixon brought up the example of Berta Caceres, a Honduran activist who was assassinated in 2016. Much of her work was centered around preventing the building of a dam that would flood a portion of the forest and displace its native inhabitants.

Nixon chose to look at environmental martyrdom in the context of trees and deforestation because deforestation is becoming an increasingly bigger global issue, especially with other issues such as climate change and displacement of humans and other organisms. With projections of world population exceeding 9 billion by 2050, Nixon believes deforestation is an ever-pertinent issue.

“Forests are a tremendously important carbon sink, with 30 percent of all terrestrial CO2 absorption being done by the forests,” Nixon said. “So, it’s really vital that if we’re not going to accelerate the forces of climate change that these forests be kept intact,” he said.

Nixon also said that 40 percent of tropical forests are inhabited, so the fate of these forests is deeply intertwined with the fate of their inhabitants. The inhabitants are vulnerable to displacement and dispossession.

Nixon reported that efforts are being taken to increase crop yields and efficiency so fewer trees need to be cut down to feed the burgeoning global population. Despite these efforts, the production of soy, logging, and beef ranching—which Nixon believes are not sufficient reasons to cut down trees—remain the leading causes of deforestation. The biggest challenge to preventing deforestation is poor regulation of environmental protection laws, he said. One may look at the role of the environmental martyr as someone who is enforcing the laws for the agents who were to enforce the law.

As unofficial enforcers of the law, Nixon argued that environmental martyrs do their advocacy as if they were already dead because leaders of environmental movements realize that there are a multitude of people coming for their heads.

Nixon emphasized the importance of refraining from romanticizing the figure of the martyr. Movement leaders such as Mahatma Gandhi and Chico Mendes, a Brazilian trade union leader and environmentalist, respectively, urged their followers to use martyrdom as an emergency measure, not as a goal.

“I don’t want anybody getting killed,” Mendes said, according to Nixon. “There’s no point in me, or any of my colleagues, dying. I don’t think dead bodies solved anything, and I know if that’s the way things go, this place will turn into an inferno. I don’t believe in bodies.”

Nixon noted a distinction between the deaths of environmental martyrs and death of the movement. In many cases, Nixon said, the people may die, but the fight continues on. Nixon observed that the death of Cambodian environmentalist Chut Wutty was used to proliferate the movement, with his followers declaring “I am Chut Wutty” at subsequent protests and rallies. Similarly, followers of Berta Caceres donned Berta Caceres masks and carving her face into their skin to embody her fighting spirit.

Today, a popular tactic for environmental movements is civil disobedience. In the United States, Nixon points to the defenders of the Redwoods as a quintessential example. The “tree sitters” were influenced in turn by the work of Edward Abbey, an environmentalist in the American Southwest, who preserved the wilderness by attacking infrastructure, including pulling surveyor stakes and putting sugar in gas tanks.

This “lawless” tactic stands in stark contrast to the tactics of many environmentalists on the Global South, such as Chut Wutty, who focused on enforcement of the law. Wutty went around meticulously documenting cases of illegal logging with his camera. In Brazil, Maria dos Santos and Zé Cláudi da Silva confronted illegal loggers. While da Silva asked for legal documentation, dos Santos documented the incident.

“They were a kind of improvised group that, on their own, determined that the law should be upheld [and] the forest should have a future,” Nixon said.

Nixon also argued that environmental activism has its roots in a particular area’s inhabitants’ desire to protect their way of life. He brought up the example of Amrita Devi, the original “tree-hugger,” who sacrificed her life to protect the forest she and her people called home.

Similarly, current efforts to save the environment involve integrating nature and the forest with cosmological, sacred forces, such as religion. Nixon brought up the example of “ecology monks,” who consecrate trees, thereby bringing a religious component into the issue of deforestation. The 1973 Chipko Movement in India involved inhabitants of a forest who protested the government selling off parts of the forest to a sports company.

“With all of these communities, there are very often hundreds, if not thousands, of years of resonance and subsistence living off these forests,” Nixon said. “But it has never become formalized in terms of individual property rights, so they are unduly vulnerable as a result.”

While the fight continues, Nixon finds hope in people acting in solidarity across borders to protect the environment. He said that removing the leader does not remove the movement.

“I do have a profound faith in the persistence and permutations of these alliances constantly revitalizing themselves in the face of extraordinary odds,” he said.