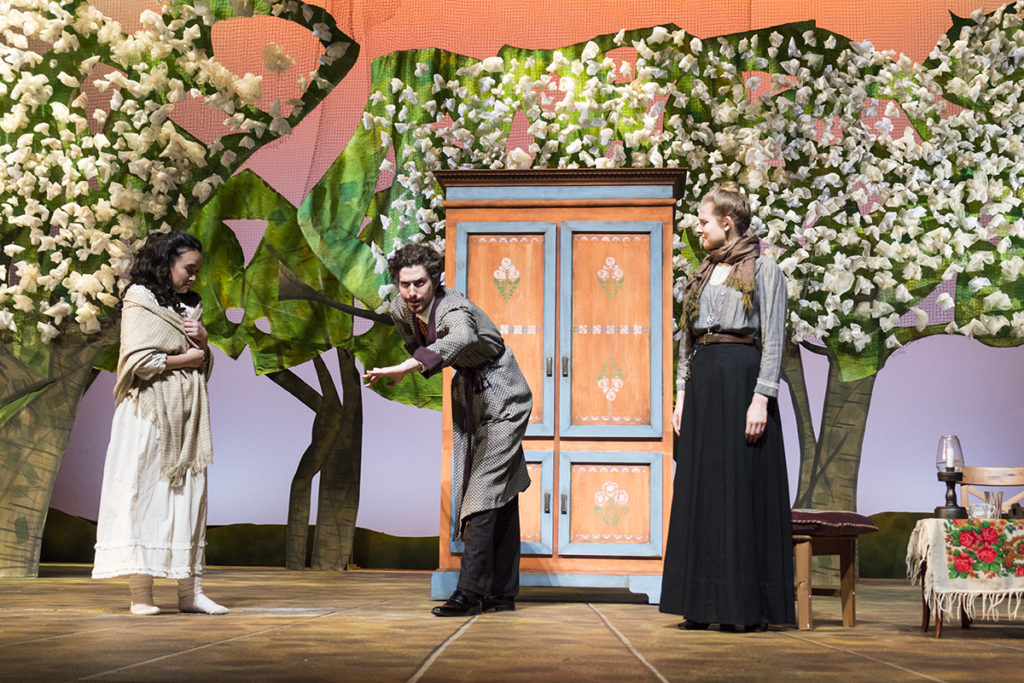 In a constantly evolving blend of comedy and drama, the Boston College theatre department’s production of The Cherry Orchard depicted the imperfections and deliberations of the human condition with instinctual performances and inviting aesthetics.

Written by renowned Russian playwright Anton Chekhov, The Cherry Orchard captures the emotional and financial struggles of a Russian landowning family at the turn of the 20th century. While no two characters are quite alike in their dispositions or obstacles, all unite in their admiration of the natural wonder that is the cherry orchard, and all attempt to grasp onto their respective realities with a nod toward the future and possibility for improvement.

Before actors even graced the stage of Robsham Theater, a few pieces of rustic, period furniture populated a tile-painted floor, situating audience members in the Russian countryside of the early 1900s. Such bare serenity diminished, however, as the lights rose to reveal anxious anticipation for a train, creating an opening scene in which Yermolay Lopakhin (Michael Mazzone, MCAS ’19), a clumsy, self-deprecating businessman, awaits the arrival of the train’s passengers with Dunyasha (Isabel Litterst, MCAS ‘21), the flighty house maid. While a tinge of slapstick comedy with the tragically infatuated, flower-dropping Semyon Yepikhodov (Stephen McAlee, MCAS ‘18) elevates the already chaotic atmosphere, the mayhem culminates in the entrance of an ensemble adorned with travel garments and luggage.

The standout of this bustling crew is Lyubov Ranyevskaya (Samuela Nemathcoua, MCAS ’18), the owner of the estate that hosted acres of cherry orchards. Returning to her beloved childhood home from a five-year hiatus in Paris, Lyubov voices a blissful satisfaction with this transition that counters the financial worries that her daughters, Anya (Ally Lardner, MCAS ’21) and Varya (Noelle Scarlett, MCAS ’18), and Yermolay acknowledge. Lyubov spends money frivolously, giving to her family or to perfect strangers what she does not have to give. She cares not about the implications of her spending or charity but thrives off of the help or joy she can bring those around her, a kindhearted inclination that might soon result in the loss of the estate.

Yermolay has a plan to ameliorate the gradual economic downfall of the family. He proposes that Lyubov cut down the cherry orchard and divide the land into plots for lease for the new generation of vacationers in need of tranquil getaway spots.

Hostility to the proposal arises in every inhabitant or visitor of the estate, establishing the defining tension of the play as well as a persistent symbol of sentimentality and unblemished beauty. Such symbolism heightens when the veil that initially hid the trees lifts to reveal a masterpiece of BC set design—massive wooden structures embellished with delicate white tufts. This new backdrop underpins the rest of the production, ceaselessly reminding audience members of the life-or-death fate of this natural phenomenon that will eventually resolve by the play’s conclusion.

Amidst the conflict, the arrival of Petya Trofimov (Andrew Meck, MCAS ’18) adds another layer of incongruence accompanied with a call to intellectual introspection. Petya is a student and former tutor of Lyubov’s son who recently drowned in the river running through the cherry orchard. His discourse invites a nearly philosophical interruption into the jubilant or superficial conversations of the ensemble, and his entrance welcomes romantic feelings between him and Anya that leave the audience mystified about a possible future together.

Nuance and uninterrupted fluidity characterize the overall performances of each and every cast member in The Cherry Orchard. Nemathcoua energized every movement, line, and expression with elegant effervescence, serving the graceful innocence of Lyubov without judgment towards the tumultuous consequences of her actions. Lardner executed the youthful purity of Anya with a stunning vocal clarity and telling eyes, and Mazzone drove home Yermolay’s thirst for self-actualization and improvement from his family’s subjugation with his consistent physical quirks.

Exquisite costuming, replete with rich colors and textures, and a furry co-star acted as playful finishing touches to the comedy-turned-tragedy. Charlotta (Catherine Backer, MCAS ’18), the bizarre governess, performs magic tricks as well as dog tricks, offering relief from the more serious convictions of the show.

In her director’s note, Patricia Riggin explains the relatability of The Cherry Orchard, citing how the humanity of the characters in the face of unavoidable yet unchangeable adversity still exists within all people today. However, Chekhov’s focus on the “foolishness of the world around him” punctured the seriousness of humanity’s undoing. The attention paid to mastering comedic moments and their timing, lifting them from the sometimes despondent dialogue, affirms the success of Riggin’s attempt to highlight the farce of The Cherry Orchard.

While bleak possibilities and conclusions loomed throughout the The Cherry Orchard, they did not characterize its entirety. Rather, emotionally sincere performances and well-executed comedic vignettes offered a whole perspective into the ebbs and flows of human emotion. 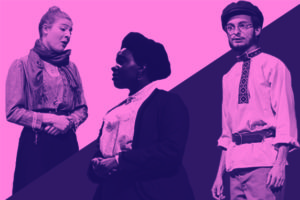