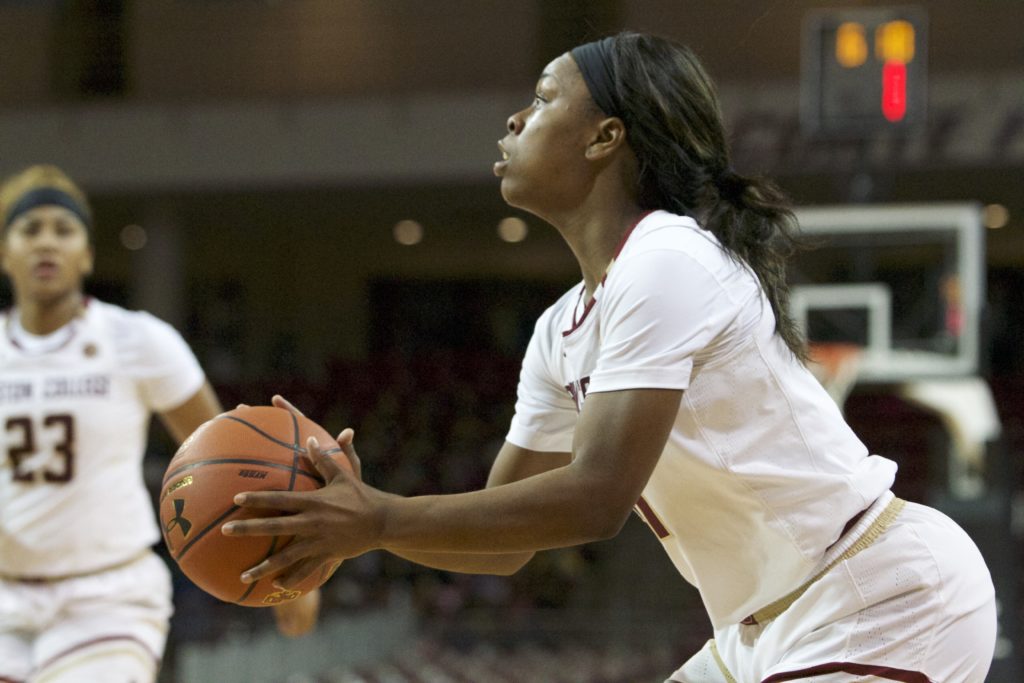 Freshman Sydney Lowery had the best game of her already-promising career, but it was a Minnesota guard with three years of experience under her belt that stole the show.

Kenisha Bell piled up 31 points for the Gophers (4-0), including 16 in the opening quarter, and Boston College women’s basketball (2-2) couldn’t overcome a 14-point halftime deficit in a 78-68 loss on the road.

The Eagles outscored their hosts by five points in the second half, led by Lowery’s career-high 19 points. It wasn’t enough, however, in their second road loss of the year. Lowery finished an impressive 9-for-11 from the free throw line, also adding a pair of steals and assists without committing a turnover.

BC shot almost 50 percent from the field, putting up 22 points in the final quarter, but it was ultimately  no match for Minnesota’s speed or size. The Gophers attempted almost 20 more shots and kept the pressure up, almost doubling up the Eagles’ rebound total.

In the opening quarter, Minnesota players-not-named-Bell went just 1-for-13 from the field. The result, somehow, was a five-point lead after 10 minutes of play. Bell did it all, missing just two shots and piling up 16 points to carry her team early.

The Eagles tied it  at two apiece in the opening minutes, but Bell hit a 3-pointer and followed it up with a steal and layup to create an early five-point lead. She’d only add to it in the second, adding seven more points to reach 23 in the opening half. The redshirt junior guard exerted her will on the glass as well, grabbing nine early rebounds.

Meanwhile, BC couldn’t find a go-to scorer. The team hit just 10 field goals in the first 20 minutes, falling behind by 14 at the break. The Eagles also struggled to keep pace with Minnesota, which entered averaging just a shade under 100 points per game. Players also ended up avoiding crashing the boards in an effort to get back on defense, resulting in many second-chance opportunities. The absence of leading rebounder Georgia Pineau was clearly felt.

The issues continued in the second half, even when the Gophers went ice cold. Minnesota started just 2-of-12 from the field in the third quarter, but BC couldn’t take advantage. Instead, Bell heated back up with a 3-pointer and an and-one, while Gophers leading scorer Carlie Wagner finally got on the board via a 3-pointer of her own.

The Eagles showed fight in the closing quarter, though, shooting excellent from the field to cut a 20-point lead in half. More shooting woes plagued Minnesota late, but they still managed to keep their distance. The large lead they built in the opening half allowed the Gophers to overcome a slow final 20 minutes.

Milan Bolden-Morris added 14 points in the loss, while Andie Anastos had a team-high seven assists.

Playing tough with the Gophers, which currently sit atop the Big Ten, is a promising sign for a young team that is lacking depth. BC split the week’s games and has shown potential for growth throughout the year.

Earlier in the week, Bolden-Morris did the bulk of the heavy lifting in the fourth quarter of a narrow 55-52 win over Fordham, scoring seven of her team’s final 21 points. She finished 6-of-7 from the field for a team-high 16 points, hitting four 3-pointers for the second game in a row.

BC led by as much as 12 in the final four minutes, but the host Rams rallied. After cutting the gap to three behind G’Mrice Davis’s 16 second-half points, Fordham came up just short. Forced to resort to fouling, Martina Mosetti hit both of the ensuing free throws to secure the win.

Fordham only managed eight points in the third, which allowed the Eagles to overcome slowing down in the  final minutes—the last field goal for BC came with 3:23 left. The Rams also finished a paltry 2-of-15 from beyond the arc, and their size advantage inside wasn’t enough to overcome a strong shooting night from the Eagles.