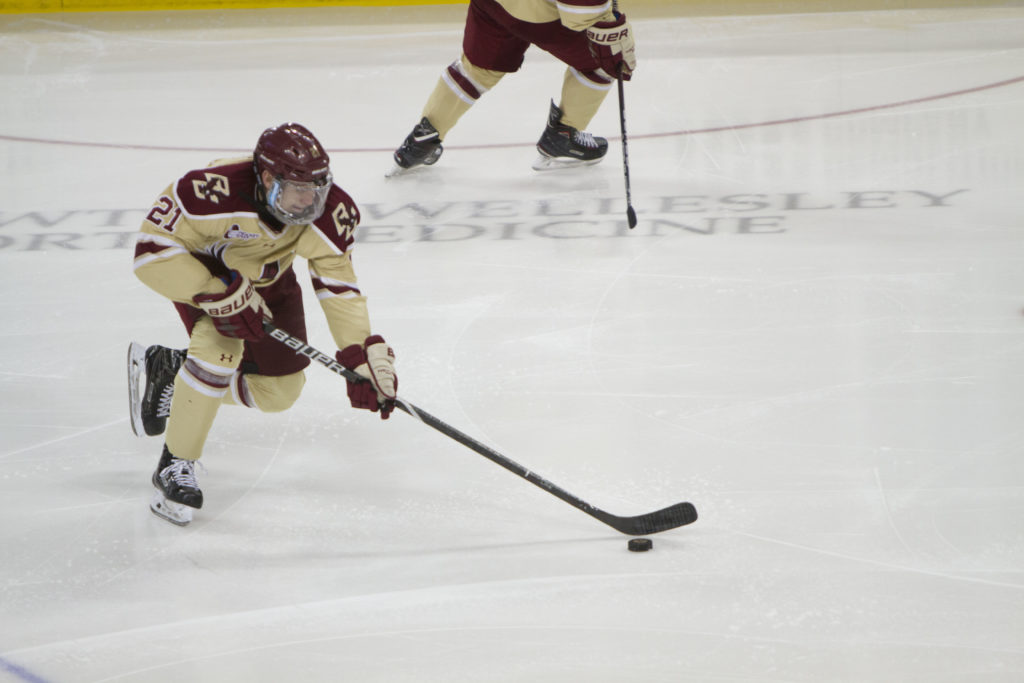 The outcomes paint a confusing picture. BC (8-5-2, 8-1-0 Hockey East) had been riding a seven-game win streak, while the Crimson (2-5-1, 2-3-0 Eastern Collegiate) came into the night having dropped four straight. The Eagles had just made their way back into the national rankings. On the other hand, Harvard sat tied for 52nd in the PairWise rankings.

The final shot count for the game was 32-21 in favor of the Crimson. Head coach Jerry York chalked up the unexpected shot generation gap to the Crimson’s game plan.

“I’d have liked to have generated more shots on goal as I look back on it,” York said. “They’re stingy in that respect—trying to get shots on goal.”

Based on the first period, nobody would’ve blamed one of the fans at Kelley Rink for believing otherwise. Although the Crimson generated nine shots to BC’s seven, the outcome appeared evident—the Eagles came out looking extremely strong, specifically thanks to the dominant line of David Cotton, Julius Mattila, and Jacob Tortora.

Sixteen minutes into the frame, BC finally broke through, as Tortora streaked into the offensive zone down the wing, facing relatively little defensive pressure, and snapped a far-post shot by Harvard goaltender Merrick Madsen. Cotton hit the crossbar with 30 seconds to go in the period, and Woll was perfect on the nine attempts that reached him.

When the horn sounded for the beginning of the second period, everything changed. The Crimson charged out of the locker room with a point to prove, and tacked on two goals.

Just 90 seconds in, Harvard defenseman Adam Baughman slapped a shot from the point through traffic in front of the net and past Woll to knot the score at one. Short-handed six minutes later after Baughman took a penalty to prevent Casey Fitzgerald from being released on a breakaway, the Crimson responded by creating a breakaway of their own. Forward Ryan Donato streaked down the ice with a couple of BC defenders in pursuit, creating a wraparound chance that Woll thwarted with a diving highlight-reel paddle save, only for the rebound to bounce directly to a waiting Michael Floodstrom. The Harvard forward elevated the puck as Woll tried to get himself back into position, and gave the Crimson their first and only lead of the game.

It didn’t take long for the Eagles to prove that they weren’t being completely outplayed. Fitzgerald picked up a minor penalty immediately after the goal to even the teams at 4-on-4, and, soon after, Mattila made his move. Cotton threaded a pass to the middle of the suddenly un-clogged ice surface, where Mattila quickly wristed a shot past Madsen to tie the game up at two apiece.

Three minutes later, the two reversed roles as Tortora placed a puck on Mattila’s stick as the Finland native broke into the Harvard defensive zone. The hot hand found his previous provider, Cotton, breaking toward the crease with a perfect lobbed pass, and Cotton beautifully backhanded the puck past a suddenly out of position Madsen. The Eagles were leading, 3-2, even though they had only put four shots on goal during the entire period—six fewer than Harvard.

Woll played another excellent game, but 32 shots, many of which were golden opportunities for the Crimson to score, may have worn down the sophomore. BC forward Christopher Grando committed a boarding penalty a few minutes into the third period. Shortly after, an attempted pass from Crimson forward Jack Bandini bounced off Nathan Krusko’s stick in front of Woll, deflecting farther across the crease to a wide-open Benjamin Solin, who pushed the puck into the wide-open goalmouth.

But Woll did his best to keep his team in the game. The shots kept coming, but the netminder refused to give up a game-winner, and his efforts turned the momentum in the Eagles’ favor. Eventually, a perfectly worked attack sliced through Harvard’s neutral-zone defense, leaving Mattila open in the slot. A diving Crimson defender couldn’t block Mattila’s snap shot, and BC found itself with a 4-3 lead, a goalie standing on his head, and a scorching-hot line.

But with less than three minutes to go in the game, Harvard scored again. Bandini’s speed allowed him to evade three Eagles defenders, and he ripped a shot past Woll, who had no chance.

The Eagles got a couple more chances—notably, Fitzgerald backhanded a puck off the crossbar with 10 seconds to go in an uneventful overtime, in which BC had to kill off a penalty, but Bandini’s work turned BC’s seven-game win streak into an eight-game unbeaten streak.

York put it best as he stood up at the postgame press conference, about to return to his locker room. He looked up from the box score, and turned back to the press, choosing to take extra time to compliment Bandini.

“He made a nice play on that tying goal, that Bandini,” he said. “That was a good play, I just watched it. Explosive.”