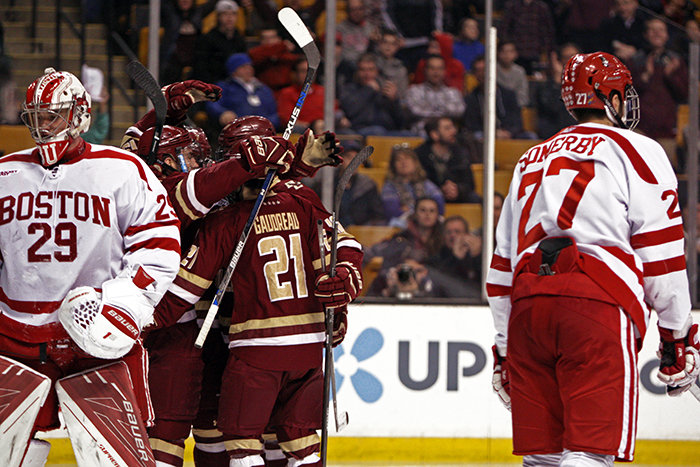 Boston College men’s hockey is set to square off against Boston University in a home-and-home series this weekend. The No. 15 Eagles (8-5-2, 8-1-0 Hockey East) are currently riding the momentum of an eight-game unbeaten streak and are firing on all cylinders. The Terriers (6-8-1, 4-4-1), on the other hand, have been erratic to say the least, alternating wins and losses in their past four games, and will try to make this weekend a turning point in their season. Although neither team is as high in the rankings as they typically are, the level of anticipation for the newest installment of the Green Line rivalry is the same as it always is.

Friday’s game can be viewed on ESPN 3 or livestreamed via WatchESPN. It will also be broadcasted on BC’s IMG radio network. Saturday’s game, on the other hand, will be aired on the Patriot League Network.

1) The Eagles haven’t lost a game since Oct. 28. During its eight-game unbeaten streak, has distanced itself from the pack in the Hockey East.

2) BC currently leads the conference in scoring (3.11 goals per game).

3) The Eagles are only allowing 1.67 goals per game—the best mark in the conference.

2) BU’s offense has only managed to score about 2.78 goals per game in conference competition, meaning that it finds itself stuck in the middle of the Hockey East (sixth), in terms of scoring average.

3) In conference play, the Terriers have committed the most penalties per game among their Hokey East counterparts. This could prove to be BU’s downfall, given BC’s high-powered offense in conference play this season.

The Eagles will look to carry the momentum over from last time these two teams met—a 3-2 victory in the Hockey East Semifinals that sent BC to the conference championship. With the season on the line, the win snapped BU’s three-game series winning streak.

It keeps its clicking on the offensive end of the ice, and goaltender Joseph Woll plays like himself. Coming into this game, the Eagles have both the best offense and defense in Hockey East. While their power play is currently ranked last in conference competition, it’s only a matter of time before things start clicking, and going against a team that takes as many penalties as the Terriers could expedite that process. After all, the Terriers’ penalty kill ranks just ninth in Hockey East games at 74.6 percent.

Its offense sputters. While the Eagles’ bread and butter all season has been their defense, their offense has stepped up significantly during their current hot streak. Despite the recent scoring surge, BC has had its struggles finding the back of the net, as the Eagles have just a 2-5-1 record to show for games in which they tally two goals or less. While head coach Jerry York’s team has been able to steal a few games due to particularly solid defensive play and goaltending, it can only catch so many breaks. If the Eagles cannot continue to ride their current scoring outburst, they’ll have a difficult time coming away with a pair of victories, let alone one against an always-hungry BU team.