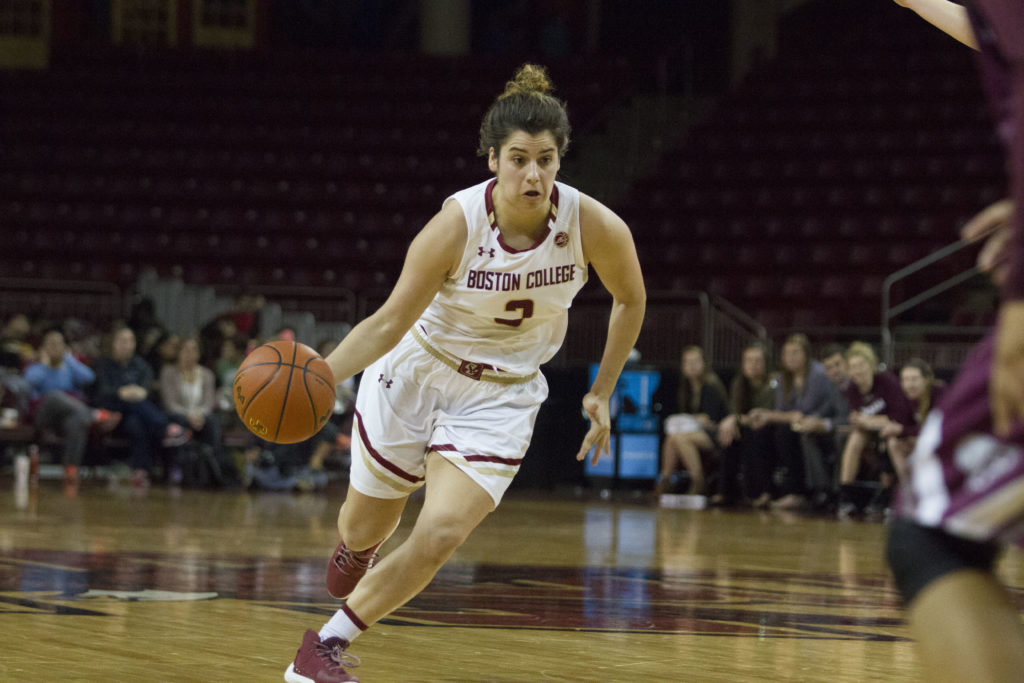 Boston College women’s basketball is gearing up to take on Fairfield on Sunday as it returns home after going 0-2 on the road this past week. The Eagles (3-4) are looking to snap their two-game losing streak this weekend against the Stags (2-5) after a tough loss to Columbia on Wednesday. BC is looking to lean on sophomore Georgia Pineau, as she is coming off a career-high 22-point game, in which she shot 8-for-9 from the floor. The Eagles have been alternating wins and losses for much of the year, and have yet to string together back-to-back wins. The Stags have also been struggling, especially in games that have gone down to the wire. Not only is BC searching for its first win in over a week, but it’s also looking to save its season before it gets out of hand.

How can you watch/listen?

Sunday’s game will be streamed live on the ACC Network Extra.

1) The Eagles have not won an away game yet this season, currently staring at an 0-4 record on the road and a perfect 3-0 record at home.

2) BC has been outscored by opponents this year by just two points. The Eagles have recorded 441 points, while the opposing teams they have faced have scored 443.

3) The Eagles have a very young starting lineup, with four of their five starters being underclassmen. Milan Bolden-Morris and Sydney Lowery are freshmen, and Georgia Pineau and Emma Guy are sophomores. Andie Anastos, a graduate student, is the exception.

1) The Stags have an underwhelming field-goal percentage, as they are shooting just 39.3 percent from the floor so far this year (177-of-400).

3) Joe Frager, Fairfield’s head coach is the only coach in the MAAC in history to have 10-straight winning conference seasons to start out his career. Frager is now entering his 11th year as the Stag’s head coach.

BC and Fairfield have not faced one another since 2008, during the Blue Sky Classic Championship in Hanover, N.H., when the Eagles beat the Stags, 62-57. BC won in a dramatic fashion, coming back in the final minute, thanks to four free throws and a layup.

Georgia Pineau puts on an encore performance. If Pineau can come out strong again and help lead her team in scoring, as well as continuing her solid rebounding and blocking game, then BC will have an advantage in the interior. Another major component for this game is rebounding. The Eagles have been routinely outrebounded by their opponents this year. If BC can out-work the Stags on the glass, it will have a better chance of getting second-chance points, and, in effect, more offensive production. Also, if the Eagles continue with their high conversion rate on forced turnovers and points scored off of turnovers, they can dictate the pace of the game, at times running a fastbreak offense.

It doesn’t capitalize on easy scoring opportunities. In every game that the Eagles have won this season, they have maintained composure and hit key free throws during the final minutes of play, in addition to knocking down shots from the charity stripe throughout the game. If the Eagles do not take advantage of these freebies, they’ll inevitably give Fairfield a shot to stay in the game. BC has been having a hard time this season defending against the 3-point shot, especially when in transition. Allowing the Stags to fire away from deep could swing the momentum to the side of the road team. Fairfield runs a pass-first offense, so if the Stags have success moving the ball around the perimeter, the Eagles could be in for a challenge.