Sequins, brilliant colors, refreshing music, and of course, vivifying movement electrified Robsham Theater this past Friday for the Week of Dance Showcase. Uniting people of all interests and rhythmic styles, the dancers of Boston College portrayed exactly what characterizes the realm of arts—an unadulterated sense of joyful spirit and energy.

For the third annual Week of Dance, dance organizations from across campus held workshops throughout last week, culminating in two weekend showcases.

Friday’s showcase kicked off with an ode to the ’90s with a performance by Females Incorporating Sisterhood Through Step, or F.I.S.T.S., called “Blast from the Past.” From Fresh Prince of Bel Air music all the way to each member’s matching pink jacket, every detail highlighted the incredible unity of their step combinations. Movement transitioned into a story as the other half of the dance group, the “millennials” who boasted of their superior style and selfies, entered and demonstrated their equally impressive moves. The playful battle, which ended in a common goal of synced steps, served as the perfect opener for the simultaneously fun and physically superb performances to come.

Swing acted as a shared theme for both the group specializing in it, Full Swing, and, unexpectedly, for the BC Golden Eagles. Full Swing obviously embodied swing in its more traditional sense, showcasing classic partner dancing and lifts, but also included some sensual, darker interludes. BC Golden Eagles channeled swing more through its period music and sweet choreography, topped with a crowd-stirring split sequence.

Technique radiated from the particular performances of the Dance Ensemble, Pom Team, and Dance Organization of Boston College (DOBC). Dance Ensemble dazzled in hot pink, blending smaller features with their large group dynamic in their jazz set. Their transitions were effortless, and their fluidity incomparable, allowing their cultivated dance talents to shine. DOBC mirrored a similar kind of effortless beauty, but instead projected this skill on a more theatrical performance. Their combination of splits and turns accompanied by their constantly shifting levels served as a cheerful treat to the eye. A tonal shift from their first “Walk This Way” set, Pom performed a lyrical set to the moving ballad “Home,” demonstrating their ability to carry their flawless unity into every stylistic setting.

Presenting Africa to You (Patu), Fuego del Corazon, BC Irish Dance, and Masti all ushered in cultural flair to their performances, mixing modern music with their distinct dance forms. Patu’s “Welcome to the Diaspora” highlighted their upbeat embrace of African dance, eliciting wild cheers from the entire audience. Fuego received a similar reception from the crowd, transitioning back and forth from modern to classic Latin dance and flashing their capacity for some stellar, extremely lofty lifts and even flips. BC Irish Dance wowed with their intricate footwork, which always seemed perfectly in sync in both appearance and sound. Their specific crowd pleaser was a visual illusion in which the dancers formed one linked circle and then appeared to magically break the formation into two and then four circles.

On Tap, BC’s tap group, were also particularly quick on their feet, exemplifying a mastered duality of arm and feet combinations. Sexual Chocolate’s take on complex footwork reached a new level as they invited the audience into the North Pole, which in their story was enduring infiltration by a sworn enemy, Tommy Thanksgiving. The war on Christmas subsides when the brotherhood teams up in powerful step sequences accompanied by chants. And what would an SC performance be without a little promiscuous floorwork at its conclusion?

Synergy, Phaymus, and Uprising all colored the stage with booming hip-hop performances. While Synergy and Phaymus blended syncopation and flow, Uprising demonstrated the slower, smoother side of the genre by dancing to both Cardi B and John Mayer.

While each and every performance showcased individual groups’ respective strengths and unique styles, all of the dance groups accomplished one common goal—illuminating the spirit of dance. In this week dedicated to the power and beauty of movement, dancers of differing levels of experience and varying styles unite to show the BC community exactly why there are 16 dance groups on campus. 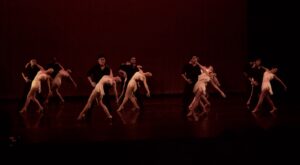 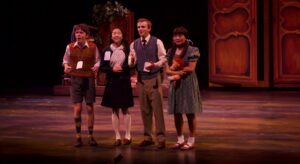 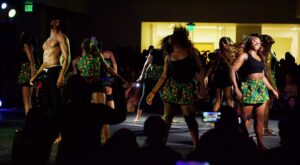