The Overwhelming Chaos of Black Friday

During this Thanksgiving holiday at home, I found myself reminiscing with my family about our different holiday experiences in the various countries we have lived in.

I mentioned Black Friday and all the emails I had been getting from different companies offering coupons and sales. I remembered the first time I found out about Black Friday. I had heard of people doing crazy things like camping outside of stores for hours, but I’d never seen it in person until about two years ago.

Wandering the streets of New York the day after Thanksgiving, I was shocked. There were camping tents outside many of the stores I passed, and lines of people that went around the block. People were pushing and shoving each other in an attempt to get to the front of the lines, and as I walked by, I heard some say they had been out on the sidewalk all night.

Remembering how foreign and strange this had all seemed to me, I asked my parents if Black Friday happened in Mexico, and if I had just failed to notice. My parents explained that Mexico had been trying to emulate the U.S. in that way, recently calling the weekend after Thanksgiving the “Good Weekend,” but that the custom was not as big as it is in the States. After thinking about it for a couple of seconds, they mentioned that they preferred what occurred in Spain during the public holidays.

In Spain, shops close completely during public holidays. In fact, the hours of operation are much more limited than in the U.S. in general. hops in Madrid are open during the first Sunday of the month and closed on the rest of the Sundays. Around 70 percent of shops and businesses are closed during August, and if holidays land on a Tuesday, most people also take Monday off, bridging their holidays, so to speak. Most establishments are even closed during lunch, in order for the Spanish people to go home, eat with their families, and take a siesta, a short nap.

Not only are the hours different, but the way people shop is different, too. My mother vividly remembers one of her first times going to a pharmacy in Spain. She walked in, and asked for eye drops to whiten her eyes because she was very tired. The man working in the pharmacy turned to her and logically said, “If you’re tired what you need to do is sleep,” and then refused to sell her the eye drops. My mom then tried to buy soap, and the pharmacist pulled out four different brands.

“I’ll take six bars of this brand,” my mom said, pointing to one.

“But then you’ll leave me with no soap to sell…I can sell you two at the most. Why do you even need all four bars?” the pharmacist replied.

Initially, my mom was confused. How could the pharmacy only have four bars of soap total? She thought of Wal-Mart, with its long white aisles filled with row upon row of soap. Then she thought about the simple manner she had been able to decide what soap to take compared with how long she would’ve taken in Wal-Mart, choosing between extra lather, extra moisture, extra freshness, cucumber scented, lavender scented, complete hydration, or any of the other multitude of assorted variations that line the rows.

After reflecting on it further, my mom saw the logic in what the pharmacist in Spain had been saying. An article in Scientific American explains that we have a limited capacity of decision-making per day. This decision-making power starts to grow weaker the more decisions we are forced to make, until in the end, our brain is fatigued. Instead of spending too much energy picking between the 30 different deodorants at CVS, we can be choosy about our choices—limiting the number of decisions we have to make a day—which allows us to make better choices when it comes to important decisions.

Though the U.S. is certainly not alone in being a country of consumerism, I think the differences become obvious when it is  compared other countries. We are stuck in a bubble that encourages us to be materialistic people, starting with the advertisements, coupons, and sale events that constantly surround us.

Though it is not an easy suggestion, it might be interesting to see how we felt if we operated more like the Spanish do on a daily basis. Perhaps we would feel less like we are constantly running out of time if we did not have to choose between Colgate extra-white, Colgate optic-white, Colgate extra-strength, Colgate cavity-prevention, and Colgate healthy-gums. I’m sure many people would riot against this thought, but what if one day, for a change, the shops were closed the day after Thanksgiving? 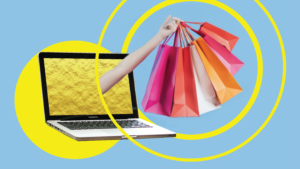