Frances Christianson, MCAS ’18, has seven months left to enjoy her flushable toilet. On June 10, 2018, she’ll depart for Guyana for two years of work with the Peace Corps.

The soon-to-be Boston College graduate, who arrived on campus planning to pursue dentistry, will be a primary literacy specialist and will aid teachers in making their curricula more efficient. She also plans to run a reading club for adults and design activities to help kids integrate English into their home lives.

Christianson grew up in Plymouth, Minn., a small town surrounded by lakes and 100 of her first cousins. Her mother is one of nine, and her father is one of ten. The extended family has a polka band and two blues bands.

“Our family reunions are sometimes like battle of the bands,” she said.

For fun, Christianson and her family will pack walkie-talkies, books, fishing gear, and back-up sandwiches in case they don’t find any fish, and maroon themselves on islands in the lakes of Canada. In her time on the islands, Christianson loves to journal and reflect on life.

“You need to be at peace with yourself to step back from the situation and understand that you are there and this is happening in this moment,” she said.

Growing up, Christianson watched almost no television. The family TV had only 10 channels, and her parents encouraged their kids to venture into the outdoors or read instead. In the same spirit that some siblings steal clothes, Christianson and her siblings stole each other’s books. The whole family adores The Lord of the Rings series and watches all of the extended cuts of the movies over school breaks.

If you make a reference to Wizards of Waverly Place or Hannah Montana, Christianson probably won’t know what you’re talking about—usually when her friends share memes, she just smiles and pretends to get the reference, she said.

Her home life was wholesome but still active. She was sheltered from the antics of Zack and Cody but was always encouraged to hike, fish, and sail. Christianson embraces her surroundings wherever she is, so when she left her quaint, midwestern town for the bright lights of Boston, she adapted.

On the first night of welcome week at BC, in what seemed to her like a daring act of defiance, Christianson skipped the optional movie night in Conte Forum and ventured into Boston with friends. Before that night, her only contravention was sneaking the school-forbidden Harry Potter and Twilight books—wrapped in brown paper bags—into her parochial grade school. On the walk to the T, Christianson’s head was on a swivel, keeping an eye out for any kidnappers that might pick her out of the group of 20 girls walking around Chestnut Hill.

She maintained her heightened sense of caution for the duration of the year. One of Christianson’s favorite weekend trips was to a chocolate shop on Newbury Street for hot chocolate. She’d get it to go, buy a croissant from the bakery across the street, and then sit on the bench in front of Tiffany & Co. Christianson would perch under the blue awning, on the lookout for any approaching muggers.

Freshman year was spent exploring, but also served as a spiritual and intellectual awakening for Christianson.

“I arrived to campus with a very by-the-book understanding of my faith,” she said.

She enrolled in Perspectives on Western Culture, taught by Stephen Pope of the theology department. In that class, Christianson first encountered the work of Dorothy Day and became exposed to the concept of discipleship.

“The fact that [Day] wasn’t afraid to get dirty, I loved that,” she said. “She embraces humanity as it is. Meeting people for who they are, never putting a fake face on herself or the people she met. I think that’s crucial for living life.”

With her new understanding of the importance of service, Christianson signed up for Appalachia Volunteers and ventured to Lexington, Ky. That week, two inches of snow fell, effectively shutting down the town. Christianson and her peers had to stay in the Lexington Habitat for Humanity office, performing tasks that were tedious, but necessary. The team built frames of wood that would later get to transported to the building sites and installed in the homes. But, Christianson never got to experience working on an actual construction.

In preparation for her high school National Honor Society, Christianson had to satisfy a community service requirement. To do so, she did the bare minimum, telling herself repeatedly that it was for her resume and going more to be there than to do something. She raked leaves at the church and handed out medals at a half marathon.

“I wouldn’t call it service. I was just a floating body,” she said.

In Lexington, although Christianson didn’t get to see the lasting effects of her work, she was making a life-changing impact. She was doing the work but not seeing the people, but in hindsight, she thinks this was a good experience.

“I learned that the importance was that the community would benefit from the work, regardless of if I got to see them appreciate it or hear them thank me,” she said.

With a refreshed image of service in her mind, Christianson went to a career fair at Conte her sophomore year, curious about service opportunities available after graduation. Everyone was in their CSOM-finest, while Christianson had showed up in jeans and a sweatshirt. Nevertheless, she perused the different stations and arrived at the Peace Corps table, where she met Lori Dunn, the field-based partnership builder and recruiter for the Boston region. Dunn told her about what distinguishes the Peace Corps from other service groups.

The Peace Corps sends its volunteers to countries for two years at a time. The community needs to reach out to the Peace Corps first, and if their plea is heard, an English speaker with a bachelor’s degree will go join the community, living in the same quarters with the same amenities as everyone else. Each volunteer is typically the only native English speaker within an hour’s drive of his or her location. Christianson was intrigued by the challenge.

She worked tirelessly on her application for campus ambassador for the Peace Corps. In her essay, she recalled her trips to the lake islands with her family and talked about how she enjoys isolation.

“I actually cried in class when I found out she had been accepted,” said Rachel Piccolino, MCAS ’18.

Christianson earned the position of campus ambassador at the end of her sophomore year. She now talks to prospective applicants to help them discern if the Peace Corps’ challenging mission is a good fit for them. In her work, Christianson frequently reflects on the demanding sacrifice of the service.

Christianson is looking forward to the challenging but rewarding nature of being a foreigner in a new culture and gets more excited for the Peace Corps after each BC service trip she takes.

Her junior year, she went on an Arrupe trip to Belize, where she got a taste of the sort of environment the Peace Corps will eventually place her in. There was limited privacy and crowded conditions, but Christianson loved every moment of it.

“To embrace humanity everyday, you to have to cross multiple cultural boundaries, and if you can embrace and listen to people, you can start to understand their points of view,” she said.

She returned from Belize at the end of Winter Break. That spring, she began working with the St. Joseph’s Society, which travels to a street near Berklee College of Music to hand out coats and sandwiches to the homeless.

One night, she jumped a bit when out of nowhere she heard someone say, “I like your coat.” She looked up to see a homeless man smiling. The two began talking, and she learned his name was Fred. On her Friday night outings, Christianson and Fred bonded over their curiosity about life and their love of plaid.

“He was the first person who challenged me to think about the privilege I have and how I use it,” she said.

Fred doesn’t have a cell phone, so he and Christianson keep in touch through Facebook, which he accesses at the public library. She considers him a mentor.

It was during her junior year—at a crossroads between her experience in Belize, her student ambassadorship with the Peace Corps, and her friendship with Fred—that Christianson began to understand her purpose in life.

“Yes, I’m getting this education for me and doing things in life because they affect me,” she said. “But I’ve realized I’m going to affect other people either positively or negatively, and I’ve decided I want to use my privilege to help people.” 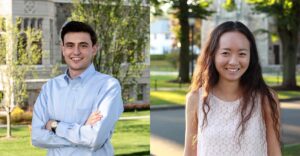 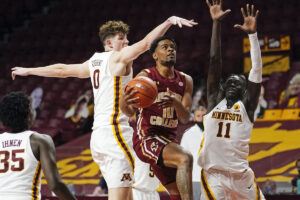