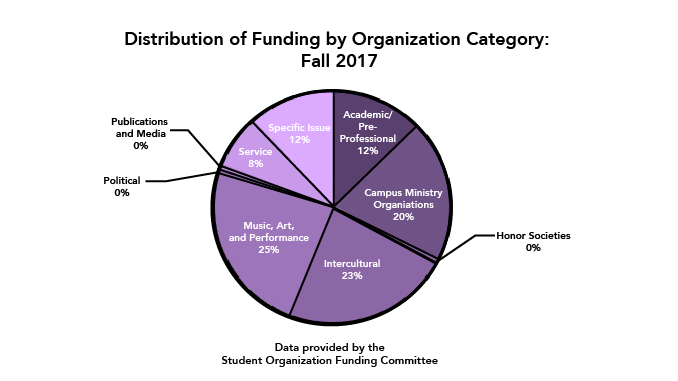 This year, many intercultural clubs at Boston College have received less funding than they did in prior years. After last year’s leaders of the organizations failed to fulfill the requirements needed for higher levels of funding, the clubs automatically entered lower funding levels.

According to the Annual Report of the Student Organization Funding Committee (SOFC) for the 2016-17 academic year, where $791,055.26 was allocated, 30 intercultural clubs made up 34 percent of the funding to student organizations, occupying the largest share of the budget. But the mid-year report for Fall 2017 shows intercultural clubs receiving 23 percent of the $327,928.51 allocated for the semester. They trail the funding of music, art, and performance groups, who receive 25 percent of the SOFC’s funding.

Club funding at BC is determined by SOFC, which receives clubs’ budget requests and divides a set amount of funding among the clubs. SOFC, however, is required to give a certain level of funding determined by the Office of Student Involvement and a program for club members, the Excel Curriculum.

When leaders of student organizations fail to meet the requirements of their tier of funding, they are downgraded to a lower level of funding, as is the case this year. The three levels of funding for on campus organizations are Cura, up to $1,499; Magis, up to $4,999; and Ignatius, which allows for unlimited funding.

Phil McHugh, chair of the SOFC and CSOM ’19, found this year unusual given the particular clubs that received lower funding levels.

While funding changed across all types of student organizations, the cultural clubs have been uniquely affected because they have been usually some of the most-active and most-funded organizations, and now have to work within a lower funding level.

The feedback from clubs has been mixed.

“I would say it’s been a variety of responses.” said Kyndra Angell, the assistant director of student engagement who is in charge of the Excel Curriculum. “I would say about a third of organizations … I may even move that to a half, about a half of organizations are 100 percent understanding. They realize that they dropped the ball last year, and they should have done better, they should have put this at a priority, and they are going to do so this year.”

The Excel Curriculum divides funding into three different tiers and each has a respective corresponding curriculum requirement, broken up into core and elective requirements in the form of events that club leaders must attend.

“We have events throughout the entire year … that every single OSI organization needs to partake in,” Angell said. “It’s basically information that our office has deemed as important to run your organization. So anything from how to plan an event on campus, how to successfully motivate, recruit, and retain members.”

Last year, however, some club leaders did not fulfill the Excel Curriculum requirements, and consequently have a lower level of funding this year.

“To my understanding, the reason BC culture clubs received less funding this year is because many of them did not complete the training hours required by the Excel Curriculum … ” said Nicole Diaz, ALC Caucus co-director and MCAS ’19. “As an AHANA+ Caucus Co-Director, this is what I understand from the organizations and I think that while BC does tend to not prioritize culture clubs, the lower funding is pretty much the responsibility of the presidents and executive boards to attend training sessions that are required by the University.”

Angell has already seen an uptick in attendance of Excel Curriculum events because organizations want to return to a higher level of funding, with some of them attaining all credits possible this semester. In the meantime, they have also been pursuing more collaborations with other groups as a way to more efficiently use funding, and seeking outside revenue streams through working concessions. Some organizations were upset at this loss of funding, but Angell feels some common ground has been reached.

“They do very great work within their organizations and they depend on a lot of the resources that OSI is able to provide them, so I think yes, they were upset, maybe frustrated,” Angell said. “But after conversations with a lot of the organizations that we’ve had … I think we are at a common understanding of, kind of, what happened in the past, how we’re going to move forward and make sure that that doesn’t happen again.”

ONE COMMENT ON THIS POST To “After Not Fulfilling Excel Curriculum, Several Culture Clubs Have Less Funding”