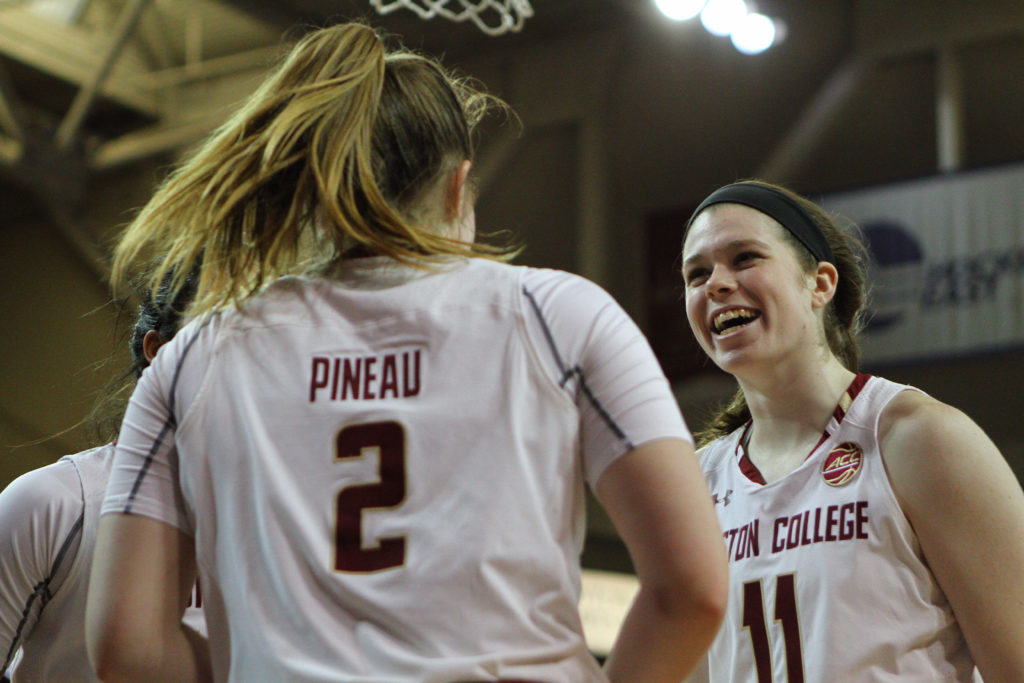 BC Snaps Skid at Holy Cross

Knotted up at just 25 apiece after a half of subpar shooting, Boston College women’s basketball needed to break out. It had averaged under 60 points during the Eagles’ recent three-game skid, and the team was on pace for more of the same.

Georgia Pineau had other ideas. The sophomore piled up 19 points and the Eagles’ (4-5) offense heated up, with four players reaching double-digits in a 70-61 win over Holy Cross on the road.

Pineau recorded a double-double with 12 rebounds and added six assists. She came three points shy of her career-high, lifting BC to their first road victory in five tries.

Milan Bolden-Morris went 3-for-4 from beyond the arc and finished with 15 points, while Sydney Lowery consistently made her way to the line, taking 12 free throws and contributing 10 points. Taylor Ortlepp’s 10 points included a crucial 3-pointer late in the game.

The Crusaders (3-5) were paced by Lauren Manis with a double-double in the loss, notching 18 points and 13 rebounds, while Infiniti Thomas-Waheed chipped in with 14 points of her own.

It was mostly a toss-up early on, but the Crusaders jumped ahead first. Holy Cross went on a 6-0 run midway through the first quarter, scoring in three different ways—Thomas-Waheed hit a pair of free throws, Tricia Byrne converted a fast break layup, and Kathryn Pedi knocked down a 3-pointer.

However, the Eagles were able to respond, despite struggling with turnovers. They closed the gap behind a decisive rebounding edge and five straight points from Bolden-Morris, ending the first down just three.

Both teams struggled at the start of the second, failing to score for three minutes. Despite drawing five quick fouls, BC struggled at the charity stripe early. When they finally managed to break through, it was behind strong play from Pineau. The sophomore broke through with a jumper, then added a trio of free throws over the ensuing minutes to stretch the Eagle lead to three.

Thomas-Waheed drained a 3-pointer to answer, though, and the teams swapped buckets down the stretch to enter halftime tied up at 25 apiece.

Pineau continued her strong game with back-to-back buckets early in the third, and five points from Bolden-Morris built an eight-point lead, the biggest of the game. But the Crusaders refused to go away, pulling within six before the fourth with a buzzer-beating Madalyn Smith 3-pointer off the glass.

The 10-3 run continued into the final frame, cutting the Eagles’ lead to just one. BC responded, though, pulling away again. An eight-point turnaround, culminating in an Ortlepp 3-pointer, pushed the lead to nine. From then on, it was just a matter of clock management for head coach Erik Johnson and Co.

Overall, BC continued to struggle with turnovers, and the game was closer than the score implied, which isn’t a very impressive effort against a sub-.500 Patriot League opponent. The Eagles have yet to begin ACC play, but a well-rounded offensive attack will be crucial. If multiple players can get into double-digits and find success at different locations on the court, there’s a chance they can avoid some of the more painful losses in conference competition.