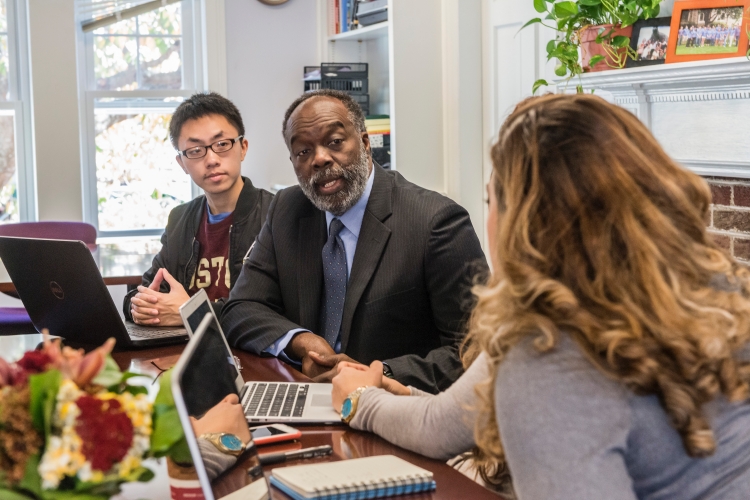 Following the “Silence is Still Violence” march in October and student leaders’ calls for action from the University regarding issues of diversity and inclusion on campus, Boston College’s Division of Student Affairs announced that Dan Bunch, former director of the Learning to Learn program, would be working as the special assistant to the Vice President of Student Affairs Barb Jones, starting on Oct. 30.

Bunch is serving as a resource for Student Affairs, assisting BC in its ongoing efforts to provide assistance and support for AHANA students. He will also work with the Office of the Provost, Division of Mission & Ministry, and Office of Human Resources to foster student formation and inclusive excellence at Boston College, according to BC News.

Bunch had retired this past summer after spending over 35 years with Learning to Learn, a program that provides academic assistance to low-income and first-generation college students. His experience working with students in this program made him the natural choice for his new position, according to Jones.

“Dan has always had great relationships with a lot of the students, and we thought it would be a good idea to bring him back, so that we have another person involved in those conversations and to consult with as we look at [what] we’re doing,” Jones said.

Following the march, Bunch and other administrators met with student leaders to discuss a number of documents created by the BC community. They included a list of petitions created by prominent student leaders; proposals set forth by the Undergraduate Government of Boston College (UGBC), which passed a resolution called “A Resolution Concerning Bias-Related Incidents” in late October; and a document entitled “A Letter of Support for Our Black Students at Boston College,” which had been signed by 556 BC students and faculty as of Dec. 6. These documents list several demands for the administration in the coming months.

Although Bunch was brought on to his new role in response to the recent increased student involvement in matters relating to diversity and inclusion, the administration had been planning to update its approach to these topics since last summer. When student leaders approached them with their ideas, those plans shifted to incorporate their proposals.

“We have been doing a lot of things over the five years,” Jones said. “I’ve been here to improve the climate and to help out students and faculty and staff around diversity and inclusion, and clearly what’s happened this fall tells us we have a lot more to do.”

Bunch has made an effort to connect with students beyond these meetings in various ways, including attending an AHANA Caucus retreat and speaking at a recent meeting of BC’s United Front, which serves as an umbrella for organizations representing cultures from Africa and the African diaspora.

Multiple administrators, including Bunch, released a letter on Nov. 20 explaining the University’s current plans to expand diversity and inclusion at BC. Many of the proposals that they suggested also appear on the various documents published by BC students.

One proposal, a diversity training module, has received a particularly high amount of attention from the administration. Like AlcoholEdu and Haven, this program would be mandatory for all incoming students. The administration hopes that by completing the module, students will be more aware of diversity on campus and feel more comfortable discussing it with their peers.

“The University was already planning to make some changes,” said Bunch. “And the students, when they came in, they threw out DiversityEdu. We were actually looking at different programs, but that was one we weren’t paying a lot of attention to.”

“We want to implement a program that’s going to have a lasting impact at Boston College,” Bunch said. “It’s a starting point for students to have a common language to talk about diversity.”

Bunch said that the University will ensure the module supports the administration’s goal to increase diversity and inclusion throughout the student body. At the moment, he says the administration is evaluating the program and how it can be integrated into BC.

Another issue with the module is the lack of an obvious next step after students have completed it. Currently, incoming freshman are exposed to the MOSAIC program only during Welcome Week.

“What we liked about DiversityEdu was that it had a model you could implement early on, but we’re not so sure about the follow-up,” Bunch said.

Diversity training for faculty and staff is also undergoing expansion as part of this process. Like the student-training module, this suggestion appeared in proposals from both UGBC and the administration.

“Now, every employee that is hired will have to do some diversity training through human resources,” Bunch said.

Although UGBC published the Resolution Concerning Bias-Related Incidents, there are no current plans for updating the code of conduct with regard to vandalism in residence halls. The defacing of “Black Lives Matter” signs in Roncalli Hall, along with a perceived lack of response by the administration, was one of the primary rallying points for Oct.’s march.

“Defacing of signs is already in the policy,” said Bunch. “You can’t condemn it any further. If you do those things, you’re violating BC’s policy.”

A survey on the undergraduate experience, which will have questions on subjects ranging from residential life to diversity and inclusion, is also in the works at the Office of Institutional Research.