Home » BC Pulls off Come-From-Behind Victory Against Warriors 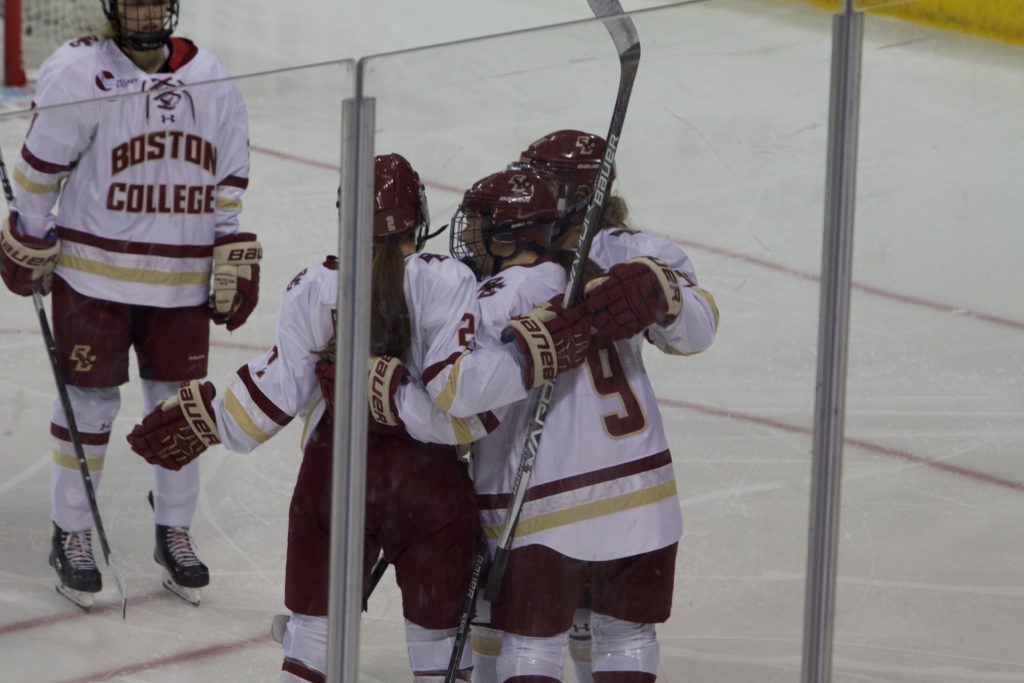 BC Pulls off Come-From-Behind Victory Against Warriors

Makenna Newkirk tipped in her 10th goal of the season, getting a piece of senior Toni Ann Miano’s clearance pass to cap off Boston College women’s hockey’s two-goal comeback against Merrimack on Saturday afternoon. Even though the Warriors scored two quick goals in the beginning of the second period, Newkirk, along with Miano and Caitrin Lonergan, rallied the troops, leading the Eagles to a come-from-behind victory on Merrimack’s home ice.

BC (15-1-3, 9-0-3 Hockey East) found its first scoring opportunity with just over nine minutes left in the first period. Junior Ryan Little zoomed in on a 1-on-1 with Merrimack’s (6-12-3, 1-8-2) Samantha Ridgewell, but the Warriors’ goaltender made the save. A few minutes later, with five and a half left, freshman Daryl Watts set up Miano with a pass in front of goal. Miano reclaimed her own rebound, but slotted the puck just above the crossbar on an open net.

While the first period ended scoreless, things rapidly picked up in the beginning of the second frame. Just over two minutes into the second period, the Warriors took control with the first goal of the game. Junior Paige Voight skated with the puck on a breakaway and scored on a wraparound chance, after having collecting her own rebound behind the cage.

But it was only a matter of time before head coach Katie Crowley’s team snapped out of its funk. Toward the tail end of the second period, Watts scored in front of the goal, slamming the puck past Ridgewell. The Eagles scored again in the 16th minute when Miano went bar-down off a pass from sophomore Delaney Belinskas. It took the Eagles two periods to break Ridgewell’s 1.77 goals against average, and once they did, they didn’t stop. Lonergan tallied one more goal before the end of the second period, converting a Warriors turnover into a breakaway goal, officially swinging the momentum to the Eagles’ side.

BC entered the third period short-handed for just under two minutes due to a cross-check late in the second, but held off Merrimack to maintain its lead. The Eagles then had to continue down a player yet again when junior Serena Sommerfield was called for a holding penalty eight minutes in. Despite playing shorthanded, BC kept pressing offensively, forcing Ridgewell to make three important stops to prevent the Eagles from scoring.

But when Watts slotted the puck to Newkirk during the next BC power play, Ridgewell couldn’t make the save. On a one-two exchange, Newkirk redirected Watts’s centering pass into the back of the net for the Eagles’ fourth and final goal of the day.

With just under five minutes left in the game, Watts was called for slashing and was sent to the penalty box. The numbers disadvantage only led the defensive situation to get worse for BC. Soon after that, Burt was called for tripping, and Ridgewell was pulled in a act of last-minute desperation. Down three players, the Eagles held their own, escaping Lawler Rink with a two-goal victory.

Although BC outshot Merrimack, 38-24, in addition to outscoring the Warriors, 4-2, the Eagles struggled to materialize any sort of offense in the early going. Lonergan said that she and her teammates bottled up their first-period frustration and used it to their advantage.

“We all got a little aggravated. I think it fired us up a little bit,” she said. “Once one goal came we all kept shooting.”