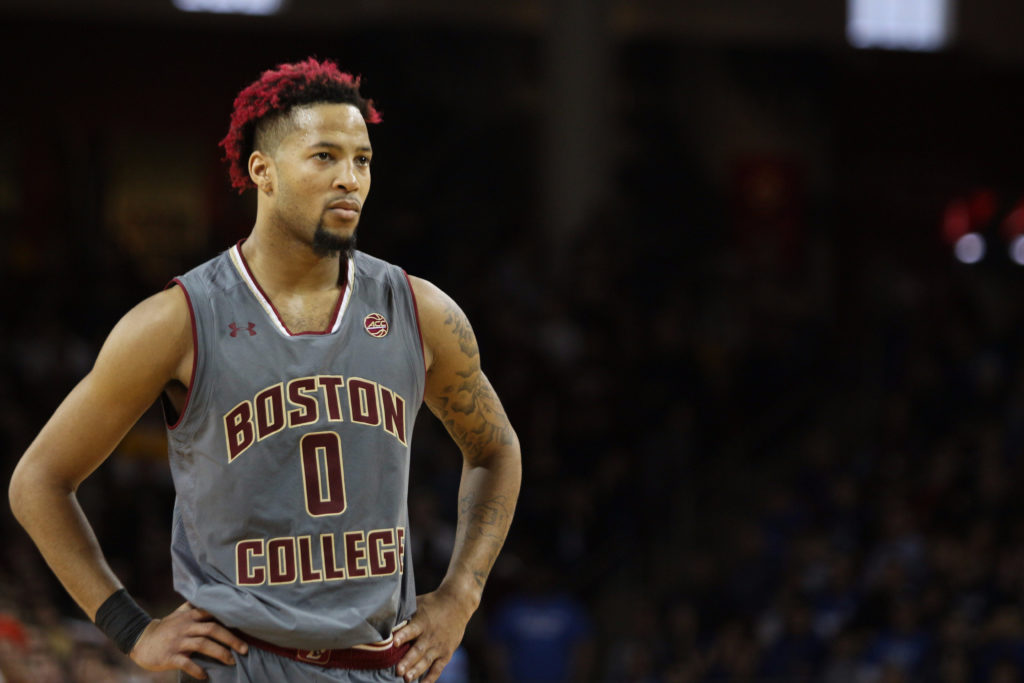 Notebook: Thanks to Lights Out Shooting, Eagles Shock Blue Devils

Favored by 15 points, Duke men’s basketball was greeted with a sellout crowd at Conte Forum and an inspired Boston College team on Saturday afternoon. Even without graduate transfer Teddy Hawkins, who was ruled out for the rest of the season with a knee injury on Wednesday, the Eagles did the unthinkable: upset the No. 1 team in the nation, 89-84. Ky Bowman came an assist shy of a triple-double, Jerome Robinson reached 100 career 3-pointers, and BC opened up ACC play with a monumental victory.

1) No. 1?
The Eagles have now won three-consecutive games against AP No. 1 teams, a remarkable feat for a program that has often been stuck in rebuild mode. In February 2014, BC went to the Carrier Dome and knocked off No. 1 Syracuse, 62-59, in overtime. The Orange saw their perfect 25-0 start to the season come to an end, falling to an opponent that was 13 games below .500. Five years earlier, the Eagles went to the Smith Center, and topped No. 1 North Carolina, 75-72. This year’s upset, though, holds special significance. It was the first time in history that they’d done it at home. The atmosphere inside Conte Forum was absolutely electric throughout the entire game, as the seats were shaking and towels were flying after every 3-pointer fell.

2) Perimeter Shooting
Coming into Saturday’s game, BC was ice-cold from beyond the arc. In their last three games, they were just 16-of-65 from beyond the arc, or a paltry 21.7 percent. Very outmatched in the paint, it was obvious that the Eagles’ only chance at keeping up with Duke—the No. 1 team in the country in offensive efficiency—was if they could hit shots from beyond the arc. Luckily for head coach Jim Christian, they did just that. BC set a season-high for 3-pointers with its first shot of the second half, en route to making 15-of-26 on the day, a red-hot 57.7 percent mark. It was the usual suspects, taking turns to bring the arena to its feet. Jordan Chatman and Robinson hit five, with the latter never missing one. Bowman chipped in three more, while forwards Nik Popovic and Steffon Mitchell even got in on the action. When Bowman’s last-ditch effort at the half rimmed out, it wasn’t a surprise that everyone in the student section had absolute faith it was going in.

3) Rebound Battle
If you compare the starting lineups of Duke and BC, you can tell that one team has a decisive advantage inside. The trio of Marvin Bagley III, Wendell Carter Jr., and Javin DeLaurier shaped up to be a nightmare for the Eagles, without Hawkins. The final rebound margin? 35-34, BC. Bowman led the charge, pulling down a team-high 10 rebounds. Guards finished with 20 of the 35 boards, working hard to overcome the height and size advantage that the Blue Devils had. It also helped make up for the Eagles’ turnover problem, as the work on the glass created 15 second-chance points. On more occasions than one, a rebound in the paint led to an open 3-pointer.

1) Turnovers, again
BC recorded double-digit turnovers for the sixth-straight game, a troubling trend that has shown no signs of improvement. The Eagles finished with 17, leading to 25 points for the Blue Devils—including nine fastbreak points. Duke ranks 11th in the ACC in defensive efficiency, so what will happen to BC when its facing the likes of Virginia and Miami, teams that are terrific on defense? It’s worrisome that the best two games, turnover-wise, came against Maine and Sacred Heart. Whenever the Eagles play a decent opponent, they’ve struggled to protect the ball. They’ve won the turnover battle just three times in 10 games.

2) Popovic’s Interior Struggles
Nik Popovic had a tall task, staring down Bagley III, the likely No. 1 pick in next year’s NBA draft. It wasn’t a surprise, then, that the sophomore struggled mightily. He finished 3-of-10 for eight points, three of which came on his first triple of the season, but was clearly outmatched inside. The Blue Devils compiled 13 offensive rebounds and 20 second-chance points with Bagley III, Carter Jr., and DeLaurier taking turns outmuscling Popovic. He also struggled in the paint on the other end of the floor, getting shut down at the rim, time and time again. He finished with just four points inside as the Eagles relied on cutting plays and lots of movement to get points in the paint. It’s a problem moving forward, as BC is clearly missing Hawkins and doesn’t have an answer inside. It’s yet to be seen how they’ll handle other teams that dominate the post in the ACC.

3) Foul Trouble
Another issue for the Eagles around the loss of Hawkins is that they’re even thinner than they were before, as far as depth is concerned, so foul trouble is huge. When Bowman picked up his fourth foul with nine minutes left, there was a collective groan throughout the arena. Robinson picked up the slack while he sat for a bit, but it was still on the forefront of everyone’s mind: what if he came back and fouled out? Bowman’s fourth was a risky reach that prompted Christian to yell at the sophomore as he took a seat on the bench. If Bowman hadn’t been able to come back, and if Robinson or Popovic, both playing with three fouls, ran into trouble, the game very easily could’ve ended differently. With Steffon Mitchell thrown into the starting lineup after Hawkins’s injury, there’s no longer a consistent bench contributor. In fact, just seven Eagles played on Saturday.