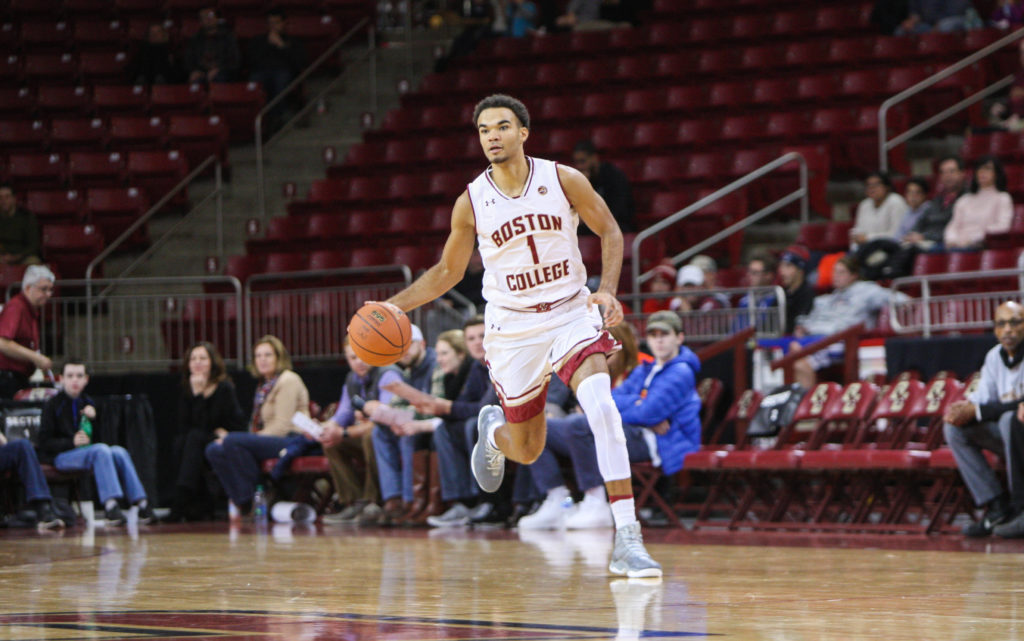 Coming off one of the biggest wins in program history, Boston College men’s basketball was met with a trap game of sorts on Tuesday night. Not only were the Eagles playing an Ivy League opponent, but they were facing a one-win Columbia team that had lost eight games in a row.

But aside from a scoring drought in the early portion of the first half, there was no hangover. In fact, the Eagles picked up right where they left off, shooting 11-of-25 from downtown. Once again, Ky Bowman, Jerome Robinson, and Jordan Chatman ran the show. The only difference? This game was over five minutes into the second period. Despite a rough patch here and there, BC walked away with an 81-66 victory—its eighth of the year, one shy of the last year’s total.

Within seconds of winning the tip, the Eagles (8-3) fired their first 3-pointer of the game. Stationed at the top of the key, Robinson swung the ball to the right corner for his partner-in-crime, Bowman. Wide-open, the sophomore drained the triple. Moments later, Robinson, who head coach Jim Christian said “set the tone,” attacked the rim, drawing contact on the way up. The junior netted both free throws—the first of his nine on the night—extending BC’s early lead. Thanks to a pair of inside baskets, Columbia (1-10) cut its deficit to one. But a few ticks later, Chatman recorded the first of his four first-half 3-pointers. It appeared as if the Lions were going to be playing catch-up the entire night.

But that wasn’t the case. Columbia ripped off a 14-2 run, jumping out to an 11-point lead, midway through the first half. Mike Smith led the way, scoring nine points during the five and a half minute stretch. The 5-foot-11 guard weaved in and out the Eagles’ defense with ease. After knocking down a pair of shots at the charity stripe, the sophomore scooted by Chatman, and went up and under for the reverse layup. On the ensuing possession, Smith sunk a wide-open 3-pointer. Having shown the ability to hit from longe-range, Smith earned the respect of Bowman—maybe too much respect. All the Lions guard needed was a little head fake and a hesitation move to sell the 3-point shot and get by the ACC Player of the Week for an easy layup.

Gabe Stefanini capped off the scoring spree with a shot from beyond the arc. But it wasn’t long until Robinson stopped the bleeding. The Raleigh, N.C. native booked a trip to the line with a ferocious drive to the lane. Robinson hit both free throws, and then turned around and picked off Tai Bibbs’s pass near half court. Without hesitation, he delivered a pass to a cutting Chatman for a layup.

After that, the Eagles put their inside game on the back burner: BC’s next nine points came off of 3-pointers. First it was Bowman, then Steffon Mitchell, and last, but certainly not least, it was Robinson draining a shot from deep. The trio of 3-pointers brought the Eagles all the way back to tie the game, jumpstarting their offense in the process. BC rounded out the half on a 20-12 run, riding Robinson and Chatman, both of whom finished the night with 20-plus points for the second-consecutive game.

Before the end of the period, Bowman appeared to injure his left arm or wrist, hauling in a defensive rebound. The star point guard took a seat on the bench was evaluated by team doctors, before ultimately returning to action minutes later.

Precautionary measure or not, Bowman didn’t play scared in the second half. Even though he struggled to knock down field goals, shooting a mere 28.6 percent of from the floor, the sophomore was as aggressive as ever on the glass. Bowman racked up eight second-half rebounds, including three on the offensive end, to record his second-straight double-double. His intensity was infectious. As a team, BC outrebounded Columbia, 29-14, during the final 20 minutes of play.

The Lions came out firing on all cylinders in the second half, starting 4-for-4 from the field. But they were helpless on the other end of the floor, and quite frankly, had no answer for the combination of Bowman, Robinson, and Chatman. Nik Popovic put on a little show of his own too. On back-to-back possessions, the 6-foot-11 center finished at the rim, getting by Jaron Faulds for a one-handed dunk, and putting back Mitchell’s missed free throw, despite contact.

Columbia—a team that has yet to lose by more than 15 points all year—kept it relatively close, but the Lions couldn’t make a dent in the scoreboard, even when BC went dead cold from the floor. At one point, the Eagles were held without a field goal for more than five and a half minutes of gametime. During that span, Columbia mustered just six points, forfeiting a potential comeback.

BC regained its momentum in the last couple minutes of play, and Bowman put an exclamation mark on the double-digit win with a monster block, denying Smith a layup, as the clock wound down.

By the game’s end, Bowman, Robinson, and Chatman had accounted for 54 of the Eagles’ 81 points, and the team’s starters were responsible for all but a pair of BC’s field goals.

Since the ACC/Big Ten Challenge game against Nebraska, when Teddy Hawkins went down with a season-ending knee injury, the Eagles have totaled a combined six bench points. The lack of depth hasn’t hurt them thus far. But come January, it’s hard to imagine fatigue won’t come into play.