Home » Notebook: BC Continues 3-Point Barrage in Victory Over Lions 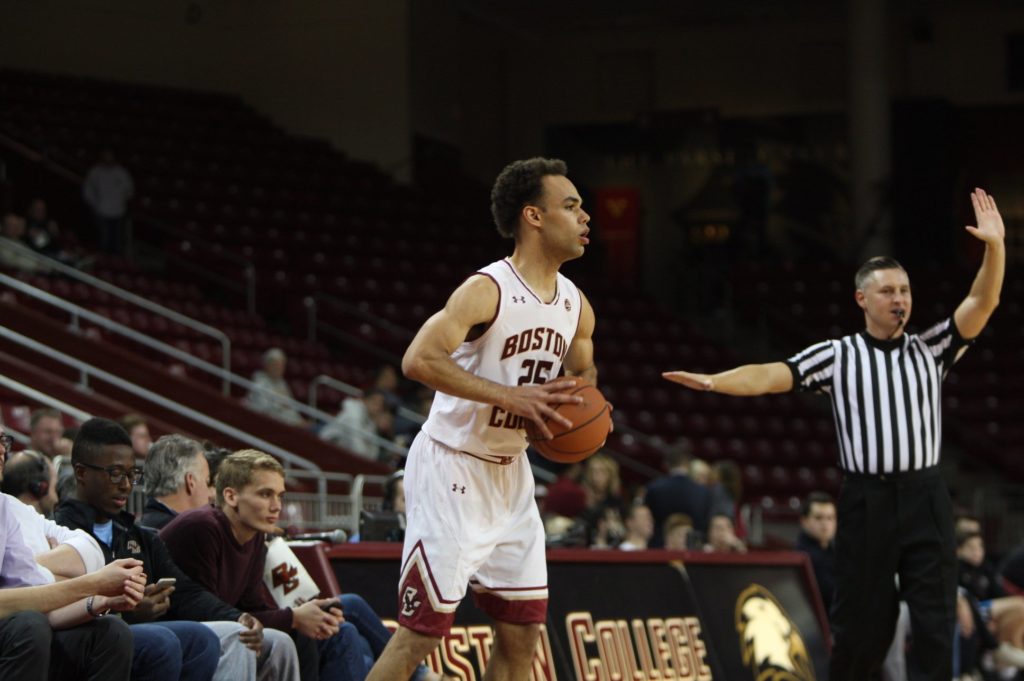 Notebook: BC Continues 3-Point Barrage in Victory Over Lions

A shocking upset of No. 1 Duke over the weekend was all anyone was talking about in the college basketball world. Yet Boston College men’s basketball needed to make sure it didn’t get caught in the limelight, even if its next game was against a lowly one-win Columbia team. A regression in terms of shooting percentage was expected, but a loss to an Ivy League opponent would have been absolutely devastating for a BC team that stood atop the ACC. Fortunately, head coach Jim Christian stuck with the same strategy—an assault from behind the arc—that allowed the Eagles to cruise to a 81-66 win.

Ky Bowman and Jerome Robinson are often the names that come to mind when BC’s (8-3, 1-0 Atlantic Coast) backcourt is mentioned. But, as of late, there has been a new face in the mix. For the second-straight game, Jordan Chatman made his mark in the box score. After dropping 22 points on Saturday, the junior proved the Duke game wasn’t just a fluke by picking up right where he left off. Chatman led the team with four 3-pointers en route to 20 points. Most impressive was his on-court confidence throughout the game. Chatman took the most shots out of any Eagle, and never looked afraid to challenge his own hot hand. On three separate occasions in the second half, Chatman stared his defender in the eyes before dishing a no-look pass to a teammate. With this kind of intimidating floor presence, opponents have yet another strong BC guard to watch out for. On this play, Chatman took a strong drive to the basket for a fantastic lay-up, something we didn’t really see the junior do at all last year.

“His game has really developed,” Christian said of Chatman after the win. “We knew he was going to become the 3-point shooter that he is, and he’s going to keep getting better and better.”

2) Sticking to the Plan

Christian made it clear that his approach in the game against Duke wasn’t just a one-time thing. Whether playing as the favorite or the underdog, the fourth-year man emphasized that his team would rely on a foundation of 3-point shots. In the six games prior to Saturday, BC made just 7.5 long-range shots per game. In the past two, it has averaged 9.5 in the first half alone. The biggest beneficiary of this strategy has been Chatman, but every starter has been getting in on the action. Even big man Nik Popovic has been lights out, making both of his 3-point attempts against the Blue Devils and Lions (1-10). BC fans will hope that Christian continues this plan, as it has made the Eagles the most exciting they have been in years.

After the Eagles beat No. 1 Syracuse back in 2014, they let the win get to their heads. The very next game, they lost to an average Miami team by 27 points. While the Hurricanes were obviously more menacing than Columbia, it was still just as crucial for BC to keep up its high level of play. Although Columbia jumped out to an early lead, the Eagles never panicked and shot over 50 percent from deep in the first half to erase the deficit. The nine total personal foul calls against BC may have been the most telling stat, as their previous season-low was 13.

Against perhaps its weakest opponent of the entire season, BC put together one of its worst performances in terms of handling the basketball. Avery Wilson got some action when Bowman came off the court. Over the course of just three minutes, the freshman had already coughed up the ball twice. But the biggest victim of the turnover bug was Popovic. In 28 minutes, the forward, not known for his ball handling skills, gave the ball away four times. In one instance, with less than two minutes to go in the game, he drove to the lane and tried to sling a one-handed pass to the corner. But with no one in the vicinity, the ball shot straight out of bounds. Bowman did not play a perfect game either. Last week’s ACC Player of the Week had three turnovers, the worst being a weak pass toward the paint that was easily picked off by Columbia’s Mike Smith for a fastbreak score.

The Eagles practically dared Columbia to shoot the long ball all night. While the Lions only managed to hit on 31 percent of their deep shots, almost all of them came on wide-open opportunities. Granted, BC never needed to adjust its defense in order to win the game, but Christian has to consider the fact that covered looks are harder for an opponent to make than  uncontested ones. The Eagles were caught napping on defense time and time again, and often had to flail toward the shooter, as an act of desperation. One can only imagine how the game would have looked if BC played this way against Duke.

Blame it on the freshman jitters. Blame it on the awkward stance and form. Either way, Steffon Mitchell has not been pretty from the free throw line. The lengthy forward shot a paltry 3-of-7 on Tuesday night, continuing his struggles at the stripe. Mitchell has now attempted 34 free throws on the year, and by only sinking 16 of them, he is currently hovering around the 47 percent mark. If other teams catch on, they might just send Mitchell to the line in late-game situations, rather than letting Bowman, Robinson, or Chatman create scoring opportunities.