Home » Go Figure: How BC Reached the Pinstripe Bowl 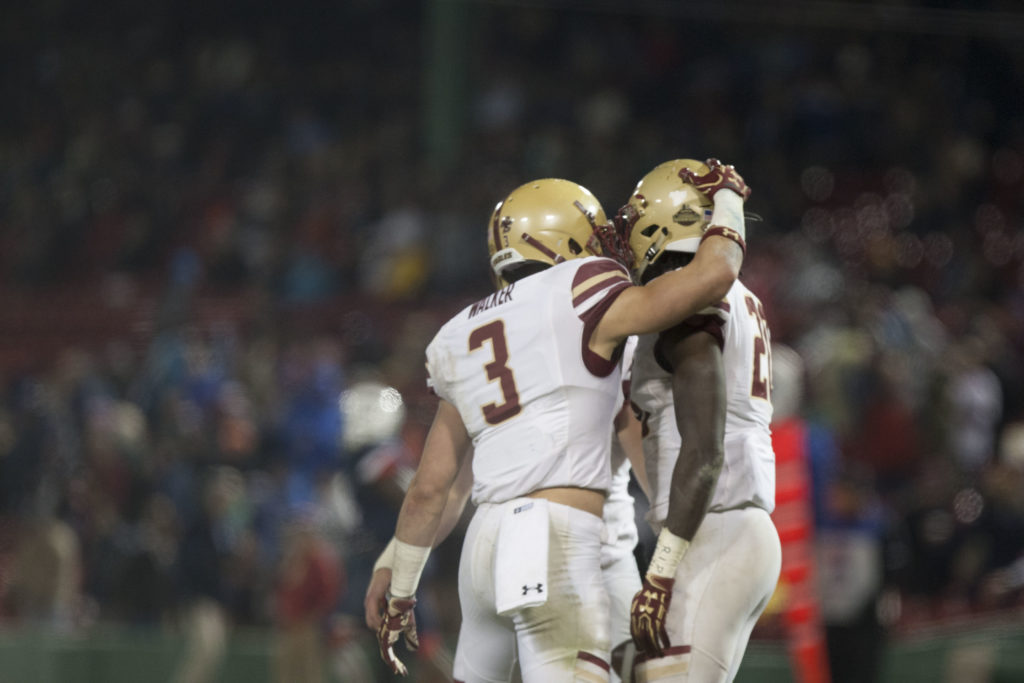 Go Figure: How BC Reached the Pinstripe Bowl

During Boston College football’s bowl announcement press conference on Dec. 3, head coach Steve Addazio told reporters that his guys had their eyes on the New Era Pinstripe Bowl back in August. Halfway through the season, it appeared as if that might have been wishful thinking.

At 2-4, the Eagles were light years away from receiving an invitation to a Tier One bowl, let alone the postseason. BC had yet to beat a team outside of the Mid-American Conference, or score more than 10 points against an ACC opponent. Some speculated that they might not win a conference game all year, and many assumed that the Addazio era was coming to an end.

Over the course of the next few weeks, everything changed. For the first time since 2013, BC rattled off a three-game ACC winning streak. Not only were the Eagles padding the win column, but they were doing so in a dominant fashion, beating Louisville, Virginia, and Florida State by an average of 22 points.

Then, after losing its first game in a month and quarterback Anthony Brown for the season against North Carolina State, BC returned to its winning ways. In back-to-back weeks, the Eagles scored six touchdowns against the likes of the University of Connecticut and Syracuse, effectively punching their ticket to the Pinstripe Bowl.

Just like Addazio drew it up, BC is in New York for the Holidays. But the Eagles’ path to Yankee Stadium has been unconventional to say the least. In what was a tale of two seasons, they went from the cellar of the conference to the Big Apple. Here’s how it happened, by the numbers.

When former BC quarterback Tyler Murphy graduated in 2015, the Eagles’ offense fell apart. While the running game was a constant, the aerial attack practically disappeared. Without balance and talent at the skill positions, the unit floundered. And its production reached a new low this year.

After six games, the Eagles were posting a mere 16.3 points per game—their lowest scoring average since 1978. At times, the offense moved the ball downfield, yet once it reached the red zone, or even midfield, it came to a screeching halt. Somehow, someway, BC flipped the switch at Louisville. A.J. Dillon ran all over the Cardinals’ defense, and the Eagles poured on 45 points—almost twice as many as they had scored in any game all season—marking their first of three 40-point games, a feat that the program had only accomplished once in its first 96 ACC games. Suddenly, BC was scoring at will, putting games out of reach by the end of the first half, and, in effect, looked like one of the most watchable teams in the country.

This summer, at ACC Media Day, Addazio announced that he’d be running an up-tempo offense this season—a playing style similar to the one that we saw in the Eagles’ 36-30 Quick Lane Bowl victory over Maryland last December. Rather than relying heavily on his running backs, Addazio aspired to expand his passing game to keep opponents on edge. On paper, it was a great idea, however a high volume of plays didn’t translate to yards or wins. The first three weeks of the season, BC ran 80 or more plays, ranking among the fastest offenses in the nation. Yet the Eagles averaged a meager 17.7 points per game. Slowly, but surely, Addazio dialed back on the number of snaps per game, and by the second half of the season, his offense, as far as pace is concerned, looked remotely similar to those of years past. In fact, the last five games of the season, the Eagles averaged 72.6 plays per game—just 4.8 more than Addazio called in 2016.

But as the tempo dipped, the production soared. Amid the second half of the season, BC recorded about 451.5 yards of total offense a game. After only racking up 400 or more yards once in the first half, the Eagles eclipsed the 500-yard mark three out of their last six contests.

Dillon ignited the offense, rushing for 1,099 yards and 11 touchdowns in the back half of the season. Quite frankly, no one could stop the eventual ACC Rookie of the Year. So, Addazio repeatedly fed the ball to the 6-foot, 245-pound workhorse. As a result, BC’s time of possession numbers skyrocketed. On average, the Eagles held the ball around 28:23 in their first six games of play. The next month and a half, they were consistently controlling the clock, draining about 32 minutes per game. Thanks to Dillon, the much improved rushing attack opened up the passing game, particularly the play fake.

In 2016, Patrick Towles recorded 30 or more pass attempts just once all year. Anthony Brown averaged 37 in his first three games at the helm. It was clear that Addazio wanted to establish a passing game in the pivotal fifth year of his advertised five-year plan. Still, even though the redshirt freshman was dropping back more than ever, his numbers were underwhelming, partially due to the fact that Addazio rarely took shots downfield. Most of the playbook consisted of swing passes, screens, slants, and play-action rollouts. More often than not, a passing play turned out to be nothing more than a glorified run. When Addazio tried to hit the big play, Brown rarely connected with his receivers. The first half of the season, he was averaging 4.65 yards per pass attempt. But as soon as Dillon got going, the redshirt freshman looked like a different quarterback.

Even though his completion percentage was down, Brown finally looked poised in the pocket, in large part because he had Dillon in the backfield. Naturally, the redshirt freshman’s number was called less and less each week. But when he did throw, he was driving the ball downfield, rather than throwing out to the flat, thanks to the increasingly potent play-action passing game. Since Dillon was so effective on the ground, opposing defenses routinely stacked the box, opening up receivers downfield. When Brown or Darius Wade dropped back and faked the handoff to Dillon, Jon Hilliman, or even Travis Levy, defenders frequently took the bait, leaving the back end helpless. It worked to near perfection, as seven of the Eagles’ 15 touchdown passes this season came off of play fakes.

By using the run game to bolster his passing attack, offensive coordinator Scot Loeffler revamped the offense, lighting up the scoreboard week after week.

Doing All the Little Things

Everyone knows about Dillon and the Eagles’ second-half resurgence. But it’s the things that they’ve done behind the scenes that are probably the most impressive. BC is the second-least penalized team in the country, one year removed from being called for close to seven penalties a game. The Eagles have only been flagged an average of 3.4 times per game this season, and just 2.3 times during their final six games of play.

Where BC probably flies under the radar the most is the turnover department. The Eagles have forced 25 turnovers—18 interceptions and seven fumbles—this season, the 18th-most in the nation and second-most in the ACC, behind only Miami. Walter Camp All-American Lukas Denis leads the charge with seven picks. And the secondary as a whole has recorded the 8th-most interceptions in the country, serving as the last line of defense against some of the premier quarterbacks in the Power Five.