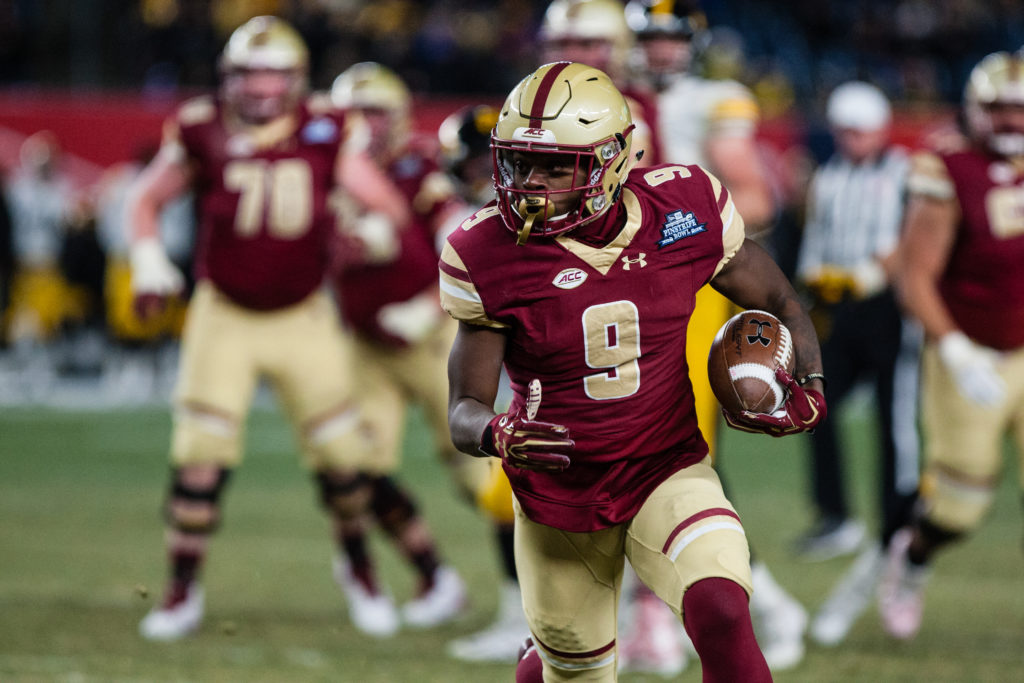 This summer, Boston College football was picked to finish last in the ACC’s Atlantic Division for the second year in a row. Six weeks in, it appeared as if the polls were dead-on. The Eagles were 2-4 and posting a mere 16.3 points per game—their lowest scoring average since they went 0-11 in 1978. But one memorable press conference and a players only meeting later, the Eagles underwent a drastic transformation. Lighting up the scoreboard and averaging a bit more than 450 yards of total offense in the back half of the season, BC was finally fun to watch again. Right on cue, the rollercoaster season culminated in a fourth-quarter loss to Iowa in the New Era Pinstripe Bowl. Although the Eagles ended up with a 7-6 record for the fourth time in the past five years, this season was one of its own.

Normally, beating a 2-5 opponent doesn’t warrant a field storming. But when the Eagles thumped Florida State—a team that entered the season ranked No. 3 in the country—35-3, on Oct. 27, celebration was justified. Not only did BC defeat the Seminoles for the first time in eight years, but it did so in dominant fashion. The Eagles’ 35 points were the most that they had ever scored against FSU in program history. More importantly, the victory marked BC’s first ACC home win in three years. To put that in perspective, more than half of the student body had yet to see the Eagles win a conference game in Alumni Stadium prior to this monumental win. The icing on the cake? It was the fourth annual Welles Crowther Red Bandanna Game. Every Eagle donned paisley-patterned cleats and helmets to honor Crowther, a former BC lacrosse player, who died saving more than dozen lives in the September 11 attacks in the World Trade Center. The blowout capped a three-game ACC win streak—the Eagles’ first since 2013. Having outscored their past three opponents, 121-65, and climbed their way back to a game above .500, BC was finally starting to turn some heads. For the first time in years, the Eagles looked unstoppable.

The score couldn’t have been more misleading. BC’s 13-point loss to then-No. 16 Virginia Tech to kick off Columbus Day Weekend was hardly representative of one of its worst performances in recent memory. For the second-straight season, Hokies defensive coordinator Bud Foster shut down the Eagles’ offense. BC offensive coordinator Scot Loeffler had to resort to trickery just to get to the end zone. Quite frankly, VTech dominated all three phases of the game. Time and time again, Hokies quarterback Josh Jackson attacked BC’s zone, picking apart a secondary that entered the game ranked 12th against the pass. Offensively, the Eagles looked lost. Quarterback Anthony Brown and Co. were a combined 2-of-17 on third and fourth down. Every so often, the unit moved the ball downfield, but promptly stalled near midfield. Per usual, overthrown balls, dropped passes, and miscommunication haunted the Eagles. To make matters worse, Colton Lichtenberg shanked a 40-yard field goal in the opening minutes first quarter—his fourth-straight miss after starting the season 6-of-6—erasing a potential scoring drive that would have struck first blood. After the game, most assumed that head coach Steve Addazio was on his way out, and some even speculated that BC might not win a single ACC game all year. Fortunately for the Eagles, it was this loss—their third in their past four games—that inspired the fifth-year coach’s prophetic “It’ll come together, and it’ll be beautiful” quote, and BC’s subsequent turnaround.

A.J. Dillon is the heart and soul of BC’s offense. Week-by-week the four-star recruit slowly made his way to the top of the depth chart, taking over for Jonathan Hilliman as the Eagles’ workhorse. The 6-foot, 245-pound back showed promise throughout the first half of the season, at times steamrolling over defenders, and once eclipsing the 100-yard mark. But it wasn’t until the Louisville game that he made a name for himself. The true freshman’s training wheels came flying off, as he ran all over the Cardinals’ defense. Dillon rushed 39 times for a whopping 275 yards and four touchdowns, piloting the Eagles’ comeback, shootout victory at Papa John’s Cardinal Stadium. In the final six games of the regular season, BC averaged 36 points per game, in large part because of Dillon. During that stretch alone, he racked up 1,099 yards and 11 touchdowns on the ground, en route to ACC Rookie of the Year honors. The New London, Conn. native finished less than 100 yards shy of the ACC rushing title, behind former Heisman Trophy Winner Lamar Jackson. Plain and simple, Dillon opened up the Eagles’ play-action passing game that accounted for the majority of their production through the air. Just by being in the backfield, he forced opposing defenses to crowd the box, creating space for receivers to break free in the backend. Without Dillon, it’s hard to imagine the Eagles making a bowl.

Ty Schwab was the last man standing. The senior weak-side linebacker was the lone survivor of the injury bug that depleted BC’s starting linebacking corps. Connor Strachan, who hurt his knee prior to the season opener against Northern Illinois, reaggravated the injury, just two games into the 2017 campaign, sidelining him for the remainder of the year. Then, Max Richardson suffered a knee injury of his own at Clemson. It was only a matter of time before the Eagles ruled him out for the season too. So, Schwab was left to lead a paper-thin position group, and mentor the likes of redshirt freshman John Lamot and junior Kevin Bletzer, who, up until then, served primarily as a special teamer. By the end of the season, you would have never known that Lamot and Bletzer were originally backups. With the help of Schwab, the two elevated their play to patch up one of BC’s biggest weaknesses. Aside from holding together the second level of the defense, the senior racked up 107 total tackles, nearly doubling last season’s mark. He also recorded 8.5 tackles for loss, 4.5 sacks, two interceptions, and one forced fumble—all of which were career highs. When all was said and done, Schwab was named to the All-ACC Third Team, something Strachan didn’t even do last season.

His first two years on the Heights, safety Lukas Denis was nothing more than a reserve on the backend. Now, he’s a future NFL Prospect. After recording just seven total tackles all of last season, Denis matched that mark in interceptions as a junior, finishing the year tied with Florida Atlantic’s Jalen Young for the second-most picks in the country. And when he got his hands on the ball, there was good chance he was going to flip the field. On average, he returned interceptions 25.6 yards, juking a number of opponents in the process. The Everett, Mass. native was at the middle of a turnover-hungry Eagles defense that logged 25 takeaways (18 interceptions, seven fumbles) on the season—the 22nd-most in the nation. But Denis isn’t just a ballhawk. He was fourth on the team in tackles, recording 83 on the season, not to mention that he also forced two fumbles. No matter where he was on the field, he often ended up near the ball. Somehow, someway he always seemed to be in the right place at the right time. Following the conclusion of the regular season, Denis was named a Walter Camp All-American. The first-year starter was the first BC defensive back to earn the distinction since former Indianapolis Colt Jamie Silva, back in 2007.

Play of the Year

Dillon, who also played linebacker in high school, is a prototypical old school running back. He routinely runs straight through the tackles, embracing contact at sheer will. But it’s his 4.56 speed that separates him from the rest of the country’s ground and pound backs. He showcased both his physicality and quickness throughout the first five weeks of the season. But outside of the BC community, his talent went unrecognized. That changed at Louisville. With a bit more than 12 minutes left in the fourth quarter, Darius Wade bypassed Thadd Smith, who was streaking across the backfield, and handed the ball off to Dillon. As soon as the true freshman reached the line of scrimmage, Cardinals’ cornerback Jaire Alexander dove head-first at Dillon’s torso. Churning his legs, the former Lawrence Academy star shed the tackle and bounced outside. Less than a second later, he was met with safety Chucky Williams. Immediately after the redshirt senior wrapped his arms around Dillon, the true freshman threw him off of his body with a ferocious stiff arm. Instantaneously, Williams hit the turf, rolling a few more yards before getting back up on his feet, only to see Dillon streaking down the left sideline. Outrunning a pair of Louisville defenders, including safety TreSean Smith, the power back coasted to the end zone on what was a 75-yard score. Media outlets around the nation picked up Gifs and video clips of Dillon’s stiff arm and breakaway run. All of a sudden, Dillon was becoming a household name in the realm of college football.

Compared to this year, the Eagles will have a relatively easy schedule in 2018. Rather than frontloading schools like Notre Dame and Clemson, like the program did this season, BC will play four winnable non-conference opponents in September. Once again, the Eagles will renew their longstanding series with the University of Massachusetts. Then, one week later, they’ll play FCS Holy Cross. After testing the waters in ACC play, BC will wrap up its non-conference slate against Purdue and Addazio’s former team, Temple. The Eagles will host Clemson, Louisville, Syracuse, and Miami, and will hit the road to play Florida State, North Carolina State, Wake Forest, and VTech. With one year under its belt, the trio of Brown, Dillon, and wide receiver Kobay White is expected to flourish, especially considering the fact that both guard Elijah Johnson and center Jon Baker are set to return to one of the ACC’s best offensive lines. Addazio has already addressed the linebacker and defensive back positions this offseason, in an attempt to account for another injury-riddled season. On paper, BC is poised to string together its best season of the decade. But until the Eagles suit up next season, every bit of optimism will be based upon speculation.