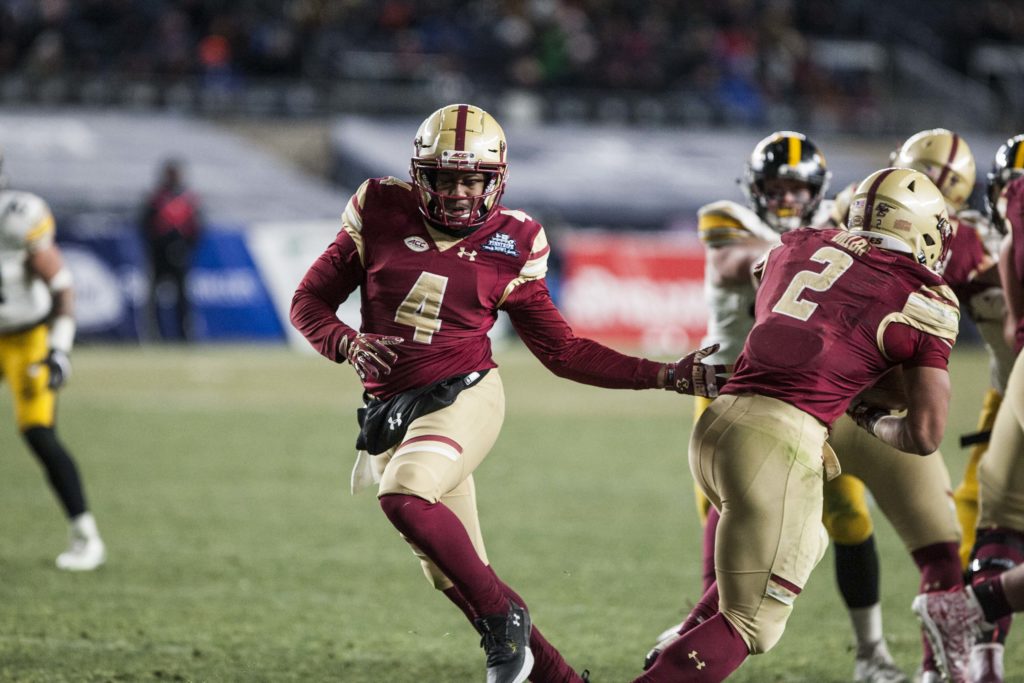 Football’s Darius Wade to Transfer for Fifth Year of Eligibility

Boston College football quarterback Darius Wade, who started the final two games of the regular season and the New Era Pinstripe Bowl in place of the injured Anthony Brown, announced his decision to transfer for his final year of eligibility via Instagram on Friday night.

“I will no longer be attending Boston College and will finish my last year of eligibility elsewhere,” Wade wrote. “I am excited for this new opportunity, and for the chance to build off of what I have built here at BC.”

Wade was a three-star recruit in 2014, and had an up-and-down career during his four years on the Heights. He saw time in three games as a freshman, then won the starting job coming out of spring practice the ensuing year. His sophomore campaign was cut short though, suffering a broken ankle in his third game of the year.

In 2016, he returned as a redshirt sophomore only to lose the starting job to Kentucky transfer Patrick Towles. The graduate student went on to guide the Eagles to a win over Maryland in the Quick Lane Bowl—their first postseason victory in nine years—while Wade saw limited action.

This season, head coach Steve Addazio pitted Wade and Brown against each other in an offseason quarterback competition, choosing not to reveal the winner until the season opener against Northern Illinois. Brown won, but after starting 10 games, he suffered a season-ending right leg injury and Wade took over under center.

He closed out his final season with the Eagles with wins against Connecticut and Syracuse before falling to Iowa in the Pinstripe Bowl. He finished his BC career having played in 21 games, thrown four touchdowns and a trio of interceptions, and posted a 111.4 passer rating.

With Brown expected to return as next season’s starter, Wade’s decision to finish his collegiate career elsewhere is no surprise. It was a frustrating run for the Middletown, De. product—he won the starting job only to lose it three games in to injury, then served primarily as a backup for the next two years.

Wade has yet to decide where he will play next season.