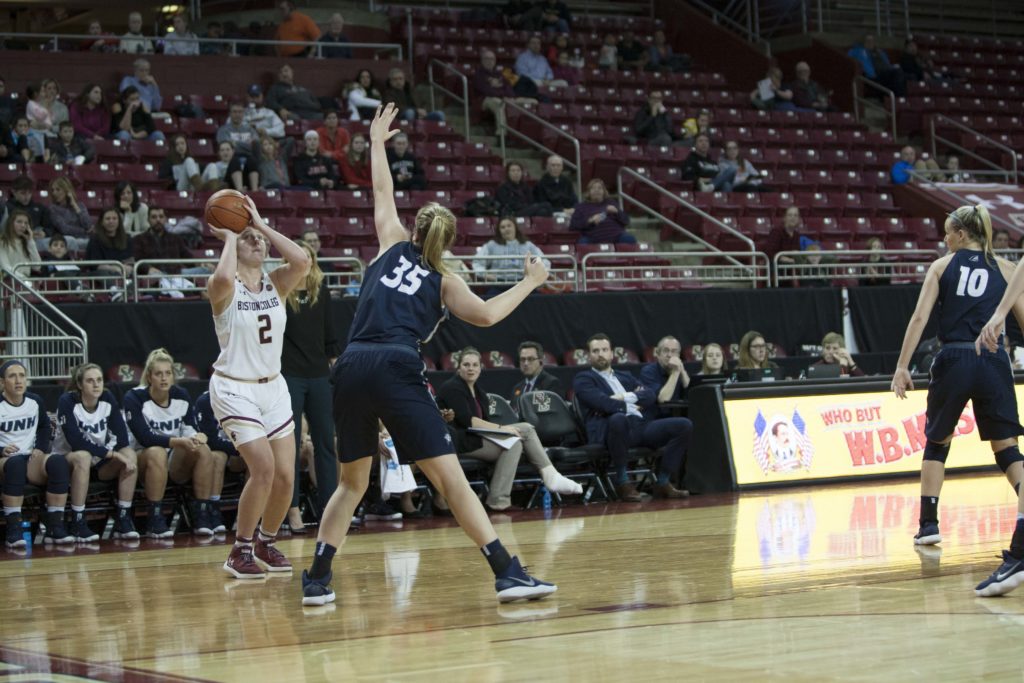 Boston College women’s basketball opens ACC play on New Year’s Eve against a strong Virginia Tech squad (11-3, 0-1 ACC) that has only lost three games all year. The two teams are both coming off losses, however—VTech fell to a respectable conference foe in North Carolina State, and the Eagles (5-8) suffered an embarrassing 21-point loss to Maine. The Hokies’ loss to the Wolfpack snapped a six-game win streak, but on Sunday, VTech will try to bounce back and take advantage of a BC team that has just two wins in its past eight games.

1) Freshman Milan Bolden-Morris scored in the single digits for only the fourth time all season against Maine, netting just eight points over 30 minutes.

2) After shooting 40.9 percent from the field in their first nine games, the Eagles have made just 36.7 percent of their shots in the past four.

3) The Eagles are just 1-5 on the road, with their lone win coming against Holy Cross earlier in the month of December.

1) VTech has four starters scoring in double figures this season. Leading the way is Taylor Emery, who averages 15.4 points per game on 44 percent 3-point shooting.

2) Through 14 games, the Hokies have outscored their opponents by an average of 21.6 points per game.

3) VTech boasted an undefeated record at home until its most recent loss to N.C. State. The Hokies are now 7-1 when playing in Cassell Coliseum.

VTech ended an 11-game losing streak by beating BC, 82-79, last February. While BC made more shots over the course of the game, Kendyl Brooks facilitated a long-range attack for the Hokies by sinking seven of the team’s 15 shots from beyond the arc. The Eagles found themselves down 16 points with just over three minutes left in the game and came just short of pulling off an incredible comeback win.

It plays smart, efficient basketball. Scoring has gone down in each of the Eagles’ past three games. Taylor Ortlepp and Bolden-Morris, the team’s only legitimate three-point threats, must find the rhythm they had earlier in the season when making nearly half of their shots from deep against the likes of Fordham, Minnesota, and Houston. Meanwhile, turnovers have shot up. The Eagles’ star sophomores, Georgia Pineau and Ortlepp, both lost the ball four times in the team’s loss to Maine and need to protect the ball if BC is to pull off the upset in Blacksburg.

It fails to put the blowout loss to Maine in the rear view mirror. The Eagles shot below 30 percent for the first time all year, and they will find it hard to win another game this season with the same approach to ball control and shot selection. With that being said, after struggling mightily throughout much of non-conference play, it is hard to imagine BC coming away with a victory against a tough ACC opponent in VTech that has breezed through its competition thus far.