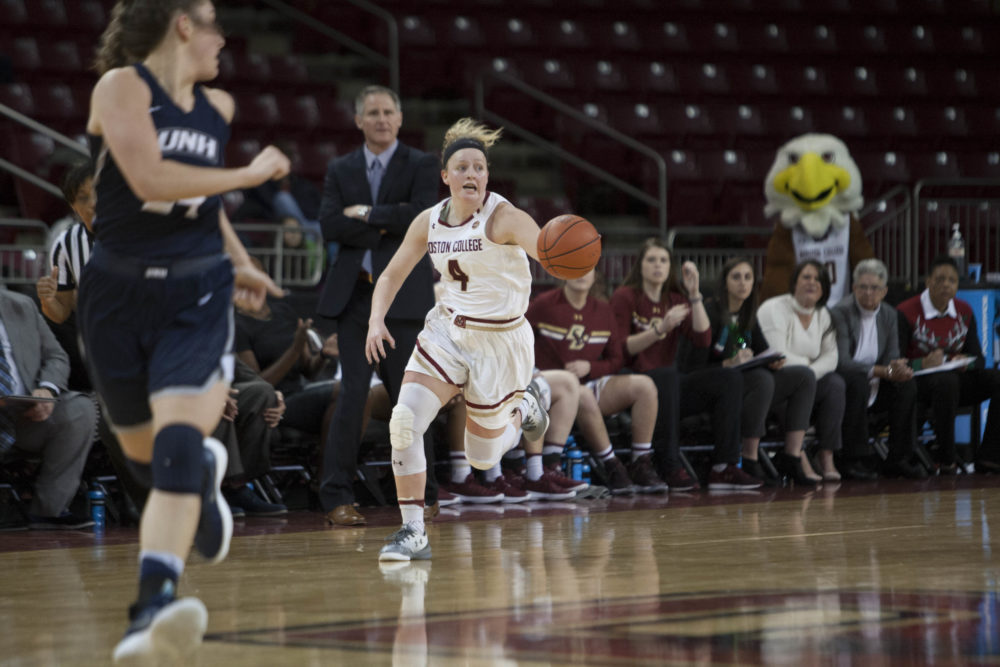 Last year, Boston College women’s basketball took down North Carolina for just the second time in program history. The victory—one in which BC racked up a season-high 88 points against an opponent that, historically, had its number—couldn’t have come soon enough for head coach Erik Johnson’s team. It snapped a 10-game ACC losing streak and gave the Eagles a sliver of hope before entering the conference tournament. At the moment, BC (5-9, 0-1 Atlantic Coast) isn’t on a 10-game losing streak, but it has dropped seven of its last nine, including three in a row, and is just as desperate for an ACC win as it was the last time it played UNC. Once again, the Eagles will get a chance to chip away at their lopsided series with the Tar Heels (10-4, 0-1), when UNC comes to town on Friday morning.

1) Following the Eagles’ 31-point loss to Virginia Tech on Sunday, their season field goal percentage dipped below 40 percent. BC is one of three teams in the conference—the others being Pittsburgh and Clemson—that is currently hovering under that mark.

2) Pittsburgh is only the ACC team that has made fewer trips to the charity stripe than BC this season. The Eagles have only attempted 216 free throws (15.4 per game), and when they get to the line, there’s no guarantee that they’re cashing in. BC shoots a mere 65.7 percent from the key—good for just 12th in the conference.

3) At the start of the season, the freshmen duo of Milan Bolden-Morris and Sydney Lowery fueled the Eagles’ offensive production. Bolden-Morris hasn’t taken her foot off the gas, and still leads the team in scoring with 13 points per game. On the other hand, after posting 13.3 points a contest throughout the first six games of the year, Lowery has recorded just 4.1 over the last eight, been held scoreless twice, and seen her usage rate decline.

1) Paris Kea leads the ACC in scoring with 20.6 points per game, not to mention that she ranks sixth in field goal percentage (55.2 percent), fourth in assists (6.5 per game), and eighth in steals (2.4 per game). The redshirt junior guard is the only player in the conference to log 30 points and 10 assists in a single game this season.

2) Jamie Cherry—the Tar Heels’ second-leading scorer—plays her best basketball against BC. In her previous bouts against the Eagles, the senior has poured on average of 26 points. And in last year’s meeting, she recorded a career-high 31 points.

3) UNC shoots the long ball at a 34.8-percent clip—the fifth-highest in the conference. But over the past two games, the Tar Heels are just 4-of-23 from downtown.

In what was, in many ways, the highlight of BC’s season, the reeling Eagles defeated UNC, 88-77, on Feb. 9, 2017. Kelly Hughes tied a career high with seven 3-pointers, scoring a season-best 24 points. She wasn’t the only one firing away from deep. Taylor Ortlepp drained five shots from beyond the arc, and Emilee Daley tacked on three more to round out the Eagles’ total to 15 triples on the day—a new program record. Emma Guy recorded her first double-double of her career, and fellow forward Georgia Pineau was three points shy of one herself. BC took command of the game at the end of the first quarter, stringing together a 14-0 run. The momentum carried into the next frame, as the Eagles tallied five more points before the Tar Heels put an end to their dry spell. Already up 15 points, BC shot a perfect 9-of-9 from the 3-point line in the third quarter, furthering its lead. Although the Eagles’ offense sputtered during the final frame, and UNC went on a 13-2, the win was never in jeopardy—especially after Ortlepp and Hughes hit a couple 3-pointers with under four minutes to go.

It shuts down the Tar Heels from 3-point land. Three of UNC’s top four leading scorers—Kea, Cherry, and Taylor Koenen—are guards, and perimeter-happy ones at that. Those three alone have accounted for 81.4 percent of the Tar Heels’ 3-point production. UNC’s success is largely dependent on how well it shoots from distance. In its 10 wins this season, the Tar Heels have converted 38.5 percent of their 3-point attempts. To put that in perspective, if they had kept that up the entire season, they would have cracked the top 20 in the 3-point shooting. But in their four losses, they are a measly 21.6 percent from long range. Considering the fact that BC averages 59.9 points per game and has only topped the 60-point mark once in the past five games, it can’t afford to let UNC run up the score.

If its turnover woes continue, and Kea and Cherry get going early. In their previous two losses, the Eagles have turned the ball over an average of 20.5 times per game. And when they cough up the ball, they’re paying the price. Both Maine and VTech capitalized on BC’s lack of ball security, scoring 19 and 27 points off turnovers, respectively. Given that the Eagles have one of the weakest offenses in the league, in no way can they shoot themselves in the foot and expect to win. Aside from taking care of the ball, BC will have to limit the scoring tandem of Kea and Cherry. UNC rides and dies by its two prolific guards. Without an established pairing of its own, the Eagles’ best bet is to crack down on defense, pulling Kea and Cherry off the 3-point line, and contesting jumpers.