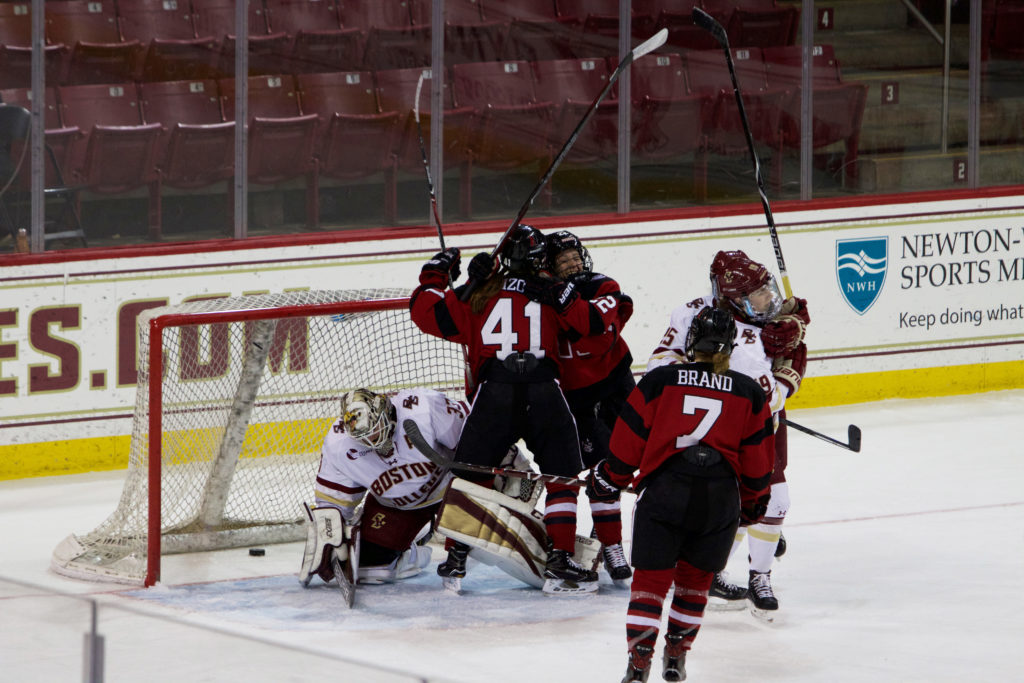 Boston College women’s hockey entered Friday afternoon’s game against Northeastern on a 12-game unbeaten streak and a six-game win streak. The Eagles had dropped one game all season—to then-No. 8 St. Lawrence away—and hadn’t lost at Conte Forum in eleven months. In February 2017, Northeastern made the short trip to Chestnut Hill and upset then-No. 6 BC by a score of 2-1. Almost a year later, the Huskies made their return, and triumphed again, winning, 4-2.

But this time around, Northeastern held the edge over the Eagles for much of the 5-on-5 stages of play. Both of BC’s goals were scored on the powerplay, and whenever the two groups were playing at even strength, the Eagles had unusual trouble breaking into the offensive zone and establishing possession. They needed an outstanding performance from their defense and goaltender Katie Burt in order to win, and they almost got it.

Burt, one of the most accomplished college netminders of all time, is just five wins shy of being the all-time winningest goalie in women’s NCAA history. She held relatively strong against Northeastern’s barrage of shots through the first two periods, but when BC went on the penalty kill with just under nine minutes remaining in the first period, Northeastern made its move.

The Huskies’ Lauren Kelly stripped Toni Ann Miano in the Eagles’ defensive zone and, from a sharp angle, banked a shot off of Burt’s back into the net to give Northeastern a one-goal advantage.

Perhaps the sudden shift in momentum set the tone for the shocking end result.

On the other end of the ice, Northeastern goaltender Brittany Bugalski was hard at work. She made all nine opening-period saves that were demanded of her, saving four in quick succession coming off of the Huskies’ goal. BC would go into the first intermission down a goal, but it wasn’t long before it was able to even the score.

Under a minute into the second period, Northeastern’s Kasidy Anderson was sent to the box for interference, and the Eagles’ stars made the Huskies pay. Caitrin Lonergan skated around the offensive zone, then ripped a pass toward the slot. The puck clinked off Daryl Watts’s stick, deflecting straight to Makenna Newkirk on the other side of the net, leaving her an easy finish into the back of a wide-open cage.

After a few quiet minutes, both teams created scoring chances before the second-period horn sounded. With just under six minutes left in the frame, Burt, Caroline Ross, and Serena Sommerfield stacked themselves in front of the BC net to keep Northeastern off the board. Burt would find herself spread-eagled in the crease a couple more times in the period, but her efforts paid off to hold the Huskies to one goal at the horn.

On the other end, Bugalski had her hands full again. The Eagles’ biggest chance came off the stick of Lonergan, but the outcome turned the game in Northeastern’s direction. In a play BC fans have seen from Lonergan in the past, she stripped the Huskies’ defense, deked her way through two zones of ice, leading to a 1-on-1 with Bugalski, and beat the goaltender with a backhand move.

But instead of settling in the back of the net for another highlight reel goal, this time, the puck dinked off the crossbar.

Instead of being up, 2-1, going into the third, the game remained tied at a goal apiece. Northeastern wasn’t wasteful with its luck, capitalizing 90 seconds into the final frame. Former Eagle Tori Sullivan put the Huskies back in the lead.

Her revenge would be short-lived, as BC struck right back two minutes later. After Kelly was sent to the box, Lonergan capitalized. Newkirk skated behind Bugalski’s net and flipped a pass backward to Watts. The freshman then zipped the puck to an open Lonergan in the slot, who cashed in on the scoring play.

The Eagles would get a chance to take the lead over the course of the next two minutes, as Lonergan and Watts managed to create a 2-on-1 opportunity. Lonergan fed the key pass to Watts, but the freshman just couldn’t handle the puck. If she’d been able to get her stick on it, the nation’s leading point-scorer surely would’ve put BC ahead for the first time all game.

Instead, Northeastern responded, yet again, grabbing the lead for good. As the fifth minute of the period began, the Huskies won a faceoff in their defensive zone, and Andrea Renner skated away with the puck. She quickly arrived in Eagles’ territory, but rather than driving toward the net, she peeled off toward the half-wall. Suddenly, she turned back and ripped an absolute laser of a backhand into the smallest of crevices over Burt’s right shoulder, finding the top corner to give the Huskies a 3-2 lead. Renner celebrated as if she’d scored an overtime winner—considering the Eagles’ reaction, perhaps they felt the same way—as if the game had finally gotten away for good.

BC’s body language showcased its frustration. Northeastern scored again with a little over 10 minutes remaining in the game. Taytum Clairmont wristed a shot on Burt, and the goaltender finally gave way to the pressure, allowing her first and only soft goal of the game. At 4-2, the contest wasn’t out of reach, but BC couldn’t muster any significant chances until very late in the game. The Eagles returned to the power play with under a minute remaining, but Lonergan could only find the crossbar again before the siren sounded.

BC gave up as many goals in this game as it had in its past three games combined. It hadn’t scored just two goals since tying BU on Dec. 1—notably, the last game before the Eagles began their six-game winning streak leading into this matchup. The top offense in the nation faltered for the first time in a month, and the defensive performance wasn’t enough to bail BC out.

Interestingly enough, the first time the Eagles will get to prove if they’ve learned their lesson is Saturday afternoon—at Northeastern. Suddenly, a conference game that after the emphatic victory over the Huskies in November was probably written off as a win by the BC faithful, could be the most important game of the Eagles’ season thus far.