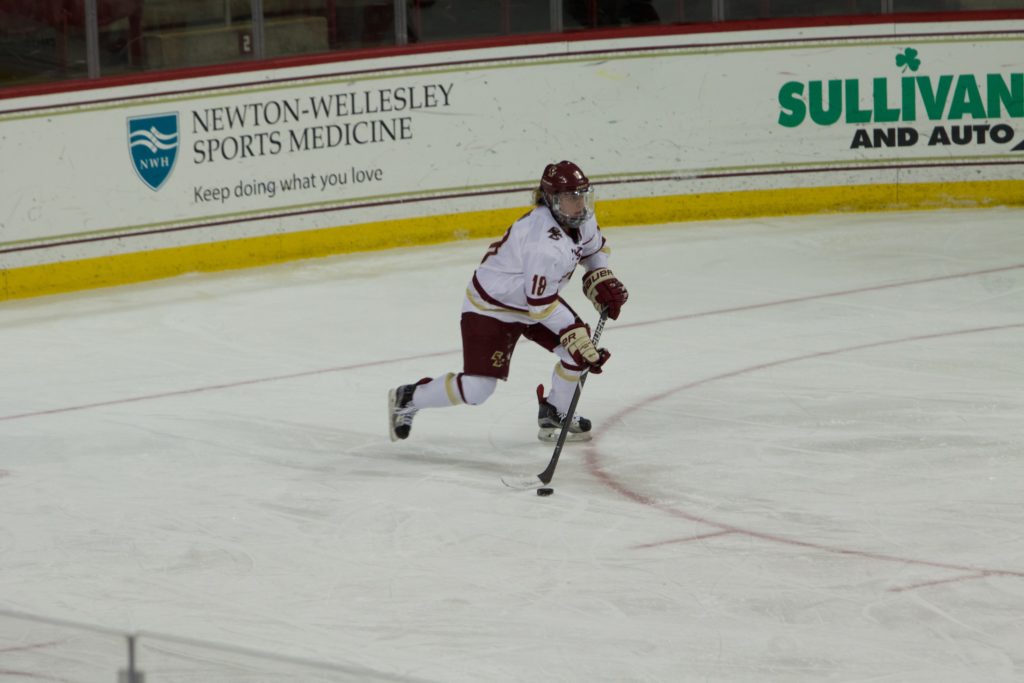 All season, Boston College women’s hockey forwards Daryl Watts, Caitrin Lonergan, and Makenna Newkirk have headlined the Eagles’ offense—the second-best scoring unit in the country. But on Saturday against Northeastern, it was Toni Ann Miano’s time to shine.

The senior defenseman, who entered Matthews Arena having never tallied more than two goals in game, recorded a hat trick in the first period alone, and went on to score the game-winner in overtime, assuring a 5-4 Eagles victory. In effect, she split the weekend series and got BC—which lost its first game in two months on Friday—back on track.

The No. 2 Eagles (19-2-3, 13-1-3 Hockey East) started the game off strong with a goal from Miano just nine seconds into the first period. Caitrin Lonergan won the opening faceoff, and, without hesitation, Kenzie Kent scooped up the puck. Moments later, she passed it out to Miano, who then blasted a shot from the point past Huskies goaltender Brittany Bugalski. Shortly after, Serena Sommerfield was called for holding around the 16-minute mark, but BC held on the penalty kill, keeping Northeastern (12-10-2, 8-7-1) off the board.

Both teams were playing down a skater for a little under a minute, but with about one minute left to go on Hobson’s penalty, Sommerfield got back out on the ice, putting the Eagles on a power play. To start, Kent dished the puck out to Lonergan on the move, who proceeded to drop it back to Miano. She did not miss the open net, extending the BC lead to 2-0, early in the first period. Following some back-and-forth play, Northeastern scored after McKenna Brand’s wraparound shot deflected off Shelby Herrington’s skates down low, helping the Huskies chip away at BC’s lead.

But Miano wasn’t finished. She logged her third goal of the game after capitalizing on a great feed from Watts with less than seven minutes to go in the opening frame. Miano trailed behind Watts, as the freshman infiltrated Northeastern territory. After being pressured by a defender, Watts simply dumped the puck off to Miano, who then fired a shot over Bugalski’s shoulder. Right after that, the Huskies made a goalie change, substituting Bugalski for freshman Aerin Frankel. Northeastern killed an Eagles’ power play in the waning minutes of the period, but the damage was done. Thanks to Miano’s scoring spree, BC was up, 3-1.

The Huskies started the second frame with a one-man advantage for the opening minute and 45 seconds, due to a Miano cross-checking penalty that was called late in the first period. Northeastern converted with 28 seconds left on the power play, thanks to a Tori Sullivan goal that was scored off a missed Denisa Krizova shot. BC headed back on the penalty kill as Erin Connolly was caught hooking about two and a half minutes into the period. Soon after, it appeared as if the Huskies had tied things up. Because Eagles netminder Katie Burt was being pinned to the back wall on the power play, Kasidy Anderson had a wide-open shot on the cage and easily lit the lamp. But the goal was eventually reviewed and taken back, after the official replay showed Burt being hit in the crease.

Less than a minute after BC returned to full strength, and the goal was called off, the Huskies scored again—and this time it counted. From the point, Skylar Fontaine centered the puck into the crease. Right on cue, Herrington redirected the pass into the net, effectively erasing the Eagles’ lead. BC continued to falter in the second period, as it came up empty on three more  power-play opportunities. And with just under three minutes left to play in the frame, the Huskies took their first lead of the game with an Anderson wrist shot.

BC entered the third period having yet to win a game this season in which it had been trailing after two frames of play.

Watts had something to say about that. Just under two minutes into the period, the freshman created space on the right side of the rink and flicked a shot past Frankel. Even after one power play opportunity for BC and two for Northeastern—one of which gave the Huskies a 5-on-3 advantage—neither team could tip the scales before the end of regulation.

But seconds into overtime—28 to be exact—Miano put an end to the game and the weekend series. Since both teams traded penalties at the end of the third period, they were each playing a man down. It wasn’t long before Northeastern corralled the puck deep in its own zone. Before it could advance past the blue line, Newkirk forced a turnover. She tracked down the loose puck and connected with Miano at the top of the circle for her fourth and final goal of the game.

Miano couldn’t have picked a better time to put on a show. The Eagles were in serious danger of losing back-to-back games for the first time all year, and the senior single-handedly willed them to victory. Her performance was a subtle reminder that this BC team is more than just a trio of prolific forwards.