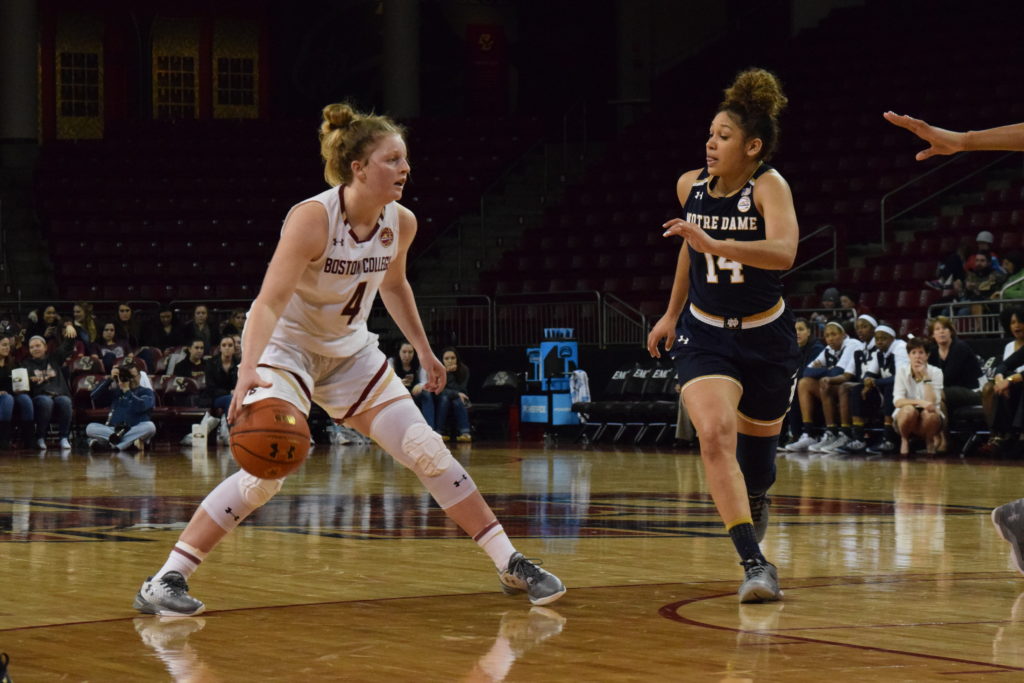 Coming off of one of its worst blowouts in years, the second-ranked Notre Dame women’s basketball came out swinging—and Boston College was the unfortunate opponent in their path.

The Fighting Irish (16-2, 5-1 Atlantic Coast Conference) jumped out to a 9-0 lead in the game’s opening minutes and didn’t look back, blowing out BC, 89-60. Using their size advantage inside, Notre Dame outrebounded the visiting Eagles (6-11, 1-3) by 22 and piled up over 50 second-chance points.

BC freshman guard Milan Bolden-Morris was held scoreless for the first three quarters, but exploded for 17 points in the final 10 minutes. Trailing by 39 entering the period, her effort was simply too little, too late for the Eagles.

Notre Dame’s Jessica Shepard, standing at 6-foot-4, was a matchup nightmare. She scored 24 points in 22 minutes and had eight rebounds, four of which came on the offensive glass. Arike Ogunbowale poured in her typical offensive output, tallying 18 points and eight rebounds. Ogunbowale scored five-straight points to open the game, and the Irish quickly built a nine-point lead. They slowed down to end the quarter, scoring just four points in the final five minutes, but still held a 21-12 lead.

It was more of the same in the second, going on a 12-0 run midway through, punctuated by an Ogunbowale 3-pointer. Shepard followed with an eight-point run of her own before halftime. The Nebraska transfer was incredibly efficient, hitting 10-of-15 shots from the field.

Ogunbowale and Shepard headed to the bench in the fourth quarter with their work done and BCs’ Bolden-Morris strived to make the final score look more respectable. Down 72-33, Bolden-Morris went on a tear. The sharpshooting forward hit five-consecutive 3-pointers and added a jumper to finish off her night. It wasn’t enough, though, as Notre Dame’s second unit kept pace.

The Irish’s Danielle Patterson had 11 points while Marina Mabrey added 10 in the win.

Turnovers plagued the Eagles throughout. Guard Martina Mosetti had eight points off the bench, but lost the ball a team-high seven times. As a whole, BC committed 20 or more turnovers for the third time this season. When all was said and done, the 29-point loss marked the Eagles’ second-worst defeat of the year.

BC’s Emma Guy and Georgia Pineau both fouled out in the loss, combining for just nine points.

The Eagles’ youth and inexperience was evident early, as they couldn’t answer Notre Dame’s opening salvo. The home-court advantage shone through, as the Irish improved their home record against the Eagles to an unblemished 13-0.

The road struggles for BC continued in what has been a disappointing stretch of the season. They’ve dropped three of four and have a lone win in ACC play. It doesn’t get any easier either, as matchups with the likes of No. 16 Duke and No. 3 Louisville are looming.