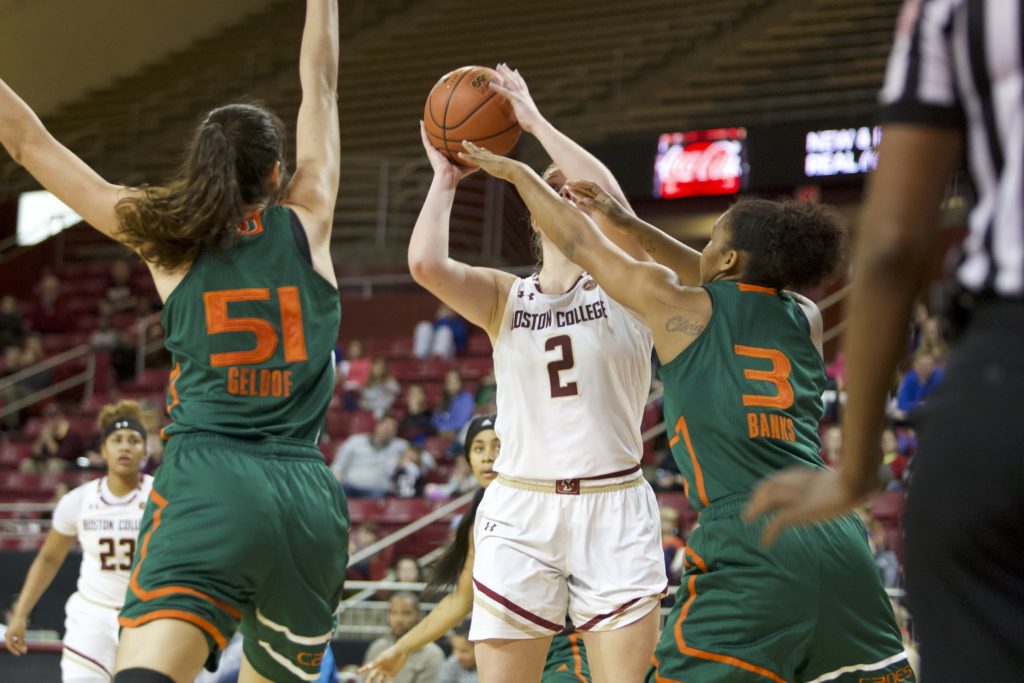 Boston College women’s basketball dropped its fourth-straight game on Sunday afternoon, continuing to struggle in conference play. Visiting Miami built a lead as large as 28, cruising to a 65-43 win that handed the Eagles (6-13, 1-5 Atlantic Coast Conference) their fifth conference loss in six tries. The Hurricanes’ (14-6, 4-3) aggressive defense and up-tempo offense was too much to overcome, as a 21-10 run in the second quarter pushed them ahead for good.

The sophomore forward has been a source of consistency amid a rough stretch for the Eagles. Pineau scored 16 points on a remarkably efficient 6-of-9 shooting from the field and chipped in eight rebounds. Clearly the best player for BC on the floor today, Pineau stuffed the stat sheet by adding an assist, a block, and a steal. She was a major reason why the Eagles remained somewhat competitive with the Hurricanes, scoring six of her team’s 10 points in the second quarter alone. One of the few Eagles to make it to the charity stripe, Pineau converted four of her five free throws. Her willingness to attack the basket and draw contact was a much-needed part of BC’s offense.

Miami entered the game ranked fourth in the ACC in rebounding, but the Eagles were able to stick with the Hurricanes on the glass while also limiting put-back opportunities. BC finished just six rebounds shy of the Hurricanes, and despite a 14-10 disadvantage on the offensive backboard, outscored Miami when it came to second-chance points. Containing Erykah Davenport in the post proved hard, as she pulled in 10 rebounds—five on the offensive glass—but didn’t finish off her second chances while under pressure from BC down low. The Eagles, meanwhile, made the most of their nine offensive rebounds, coming away with 14 second-chance points. Pineau and Emma Guy both had eight boards, while Guy piled up three blocks in an inspired effort down low.

Bolden-Morris has been a bright spot for the BC program—a freshman who’s consistently been among the top scorers on the team. Possessing excellent range and the ability to put pressure on the defense in ways that the other Eagles cannot, Bolden-Morris is a well-rounded scorer. Her repertoire of spin moves, stepbacks, and crossovers show flashes of a great talent that BC must exploit to the fullest. She scored 11 points, her 15th double-digit performance on the season, and also recorded four rebounds. If anything is to be gleaned from this year, the Eagles’ hopes begin and end with Bolden-Morris continuing to grow.

It’s the same old story—BC turns the ball over at an alarming rate. The Eagles piled up 11 turnovers in the opening half, ultimately finishing the game with 20. The last three games have resulted in 20-plus turnovers each time, a troubling trend that has led to blowouts in two of those three contests. BC gave the Hurricanes more than enough transition opportunities, and they converted—Miami had 22 points off turnovers, compared to just eight for the Eagles. For the team to start improving, their guards need to start making smarter decisions with the ball. BC is one of just two teams in the ACC with a negative turnover margin, and recent games have shown no signs of improvement.

Giving up six 3-pointers in the first half on mostly open looks is a surefire way for BC to fall behind big, and a nine-point deficit ballooned to 20 at the break. BC has struggled on the defensive end as much, if not more than, the offensive end this year. Miami finished with seven 3-pointers on almost 50 percent shooting, so tightening up on defense and closing out on shooters will be crucial for the Eagles moving forward. After holding Clemson and Notre Dame to a combined 16 percent (4-for-25) from beyond the arc the previous two games, BC failed to measure up to the same standard of defense on Sunday.

The Eagles entered Sunday ranked sixth in the ACC in 3-point shooting and were shooting six percentage points higher (39.4 percent) than their season average over the last four games. That trend was quickly reversed, though, as BC finished just 4-of-18, or 22 percent. The struggles proved costly, as it couldn’t shoot itself back into a game that they trailed by 20 at the half. Andie Anastos missed her lone attempt, while Bolden-Morris finished just 2-of-8, her lowest total since December 28 against Maine. The Eagles have leaned heavily on the 3-point shot this year, shooting over 40 percent in five of their six wins. In their 13 losses, they’ve broken the 40-percent mark just three times.