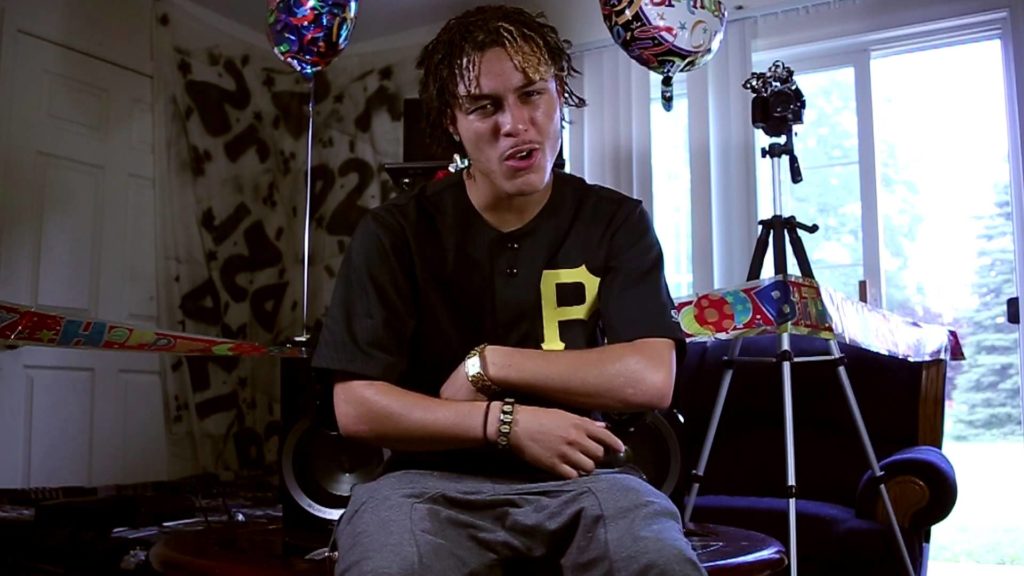 On Jan. 10, 2018, 19-year-old rapper Lil Skies released his debut album Life of a Dark Side. Originally from Waynesboro, Pa., Skies briefly attended Shippensburg University before dropping out to pursue a career in music. Prior to the album’s release, Skies had garnered a sizeable SoundCloud following, capitalizing on his unique sound framed by crisp and articulated vocals, firm bars, and interesting aesthetic.

Prior to releasing his full album, Skies previewed the project with four singles: “Red Roses,” “Lust,” “Signs of Jealousy,” and “Nowadays.” These four songs provide the listener with fantastic examples of Lil Skies’ abundant potential. Skies bounces around the production, which carries a sort of cloudy and dreamlike cadence, with carefully placed and precise bars. His flow is integrated perfectly into the percussion, dropping lines right at the 808 hit, framing his syllables around the snares and piano chords. He constructs choral melodies that have a sense of depth, meaning, and, to put it simply, realness.

Skies, on these four tracks, avoids the now omnipresent clichés of trap music, namely violence or selling narcotics. His voice is textured, possessing a sort of refined grit, and oscillates between well-framed bars and sweeping vocals. On “Red Roses”, the song that propelled him to a much higher level of notoriety, Skies seems to flow effortlessly over a plucked instrumental. His chorus has a certain depth to it, touching on the loyalty of friends, death, a few of his favorite things (Backwoods, and, you guessed it, red roses), and flows seamlessly between his verses.

“Lust,” produced by CashMoneyAP, demonstrates a peppy, Energizer Bunny side of Lil Skies. By discussing the confusing ambiguity of love and physical attraction with a sped-up delivery and higher pitched vocals, Skies creates a fun, bouncy track. This stylistic change ultimately gives off Lil Uzi Vert vibes, and is a further showcase of Lil Skies’ wide-ranging abilities and talent. Lil Skies, in fact, was the opening act for Uzi on his most recent tour, and it is clear that he absorbed more than a growing affection for facial tattoos from the Philadelphia artist.

“Nowadays,” another CashMoneyAP beat, is Skies’s best chance to achieve mainstream success on the Billboard charts. The track’s two-part chorus, featuring Landon Cube, is the highlight of the entire record. In addition to his contributions on the chorus, Cube adds in an excellent verse, which showcases his impressive vocal abilities. As was the case with Red Roses, Skies glides over the verses, touching on real-life, tangible issues, such as self-perception, breaking a social construct, and reminiscing on old times.

If Lil Skies had dropped a six-song mixtape, featuring two additional tracks to the four aforementioned, it would be nothing short of a perfect introduction to a very talented artist. The major problem on Lil Skies’ album is that he clearly went for a quantity over quality approach. Songs like “Welcome to the Rodeo,” “Boss Up,” and “Tell My Haters” are full of basic production and boring, played out rhymes leaving the album feeling drawn out, incomplete, and lacking substance.

From a logistics standpoint, Skies did more than enough to create anticipation for the release. By putting out his four best songs before the release, Skies created the illusion that the whole album would be of a roughly equivalent caliber to the singles. Ideally, a single should provide a highlight from the album, inviting the listener to desire more from the artist and inspire the audience to listen to the whole record. The rest of Skies’s album was, to put it simply, a disappointment, as the quality and caliber of the four singles blow the rest of his material out of the water.

Lil Skies’s authenticity as an artist is also up for debate. Every artist must create a special niche in the rap game, usually framed by a distinct sound, aesthetic, subject matter, or a combination of the three. It is crucial to do so by taking elements from one’s own genuine experiences and lifestyle. While rap music is almost inherently bombastic and braggadocious, there is a reason that nobody questions Jay-Z’s wealth, 21 Savage’s street credit, or Eminem’s experiences with addiction. They rap about their genuine experiences true to themselves.

Lil Skies, unfortunately, seems to depart from his true self on the large majority of this record. Skies has gone on record multiple times to say that he does not involve himself with hard drugs and only smokes marijuana. He talks about experimenting with other drugs, however, and explicitly refers to sipping lean and taking Xanax on his album. By discussing and glorifying hard drugs, Skies is doing nothing but compromising his own image by violating his own authenticity as an artist. In addition, Skies discusses sending out shooters on a rival, and even carrying out gun violence himself. Again, this severely compromises his image, and essentially sets him up to be exposed by a member of the media or other rapper at some future date.

Overall, Skies has loads of potential, although the direction he goes in from this musical pivot point is unclear. As of Jan. 16, his album still sits at fourth on the iTunes charts, and is seemingly poised to continue to have continuing commercial success. When he is operating on all cylinders, Skies creates tracks that are extremely enjoyable to listen to. As was the case with the majority of this album, when Skies is not executing his full potential, his bars become tacky, his choruses forced, and his songs unmemorable. Furthermore, he needs to refine his material to include less modern-day trap cliché’s (drugs and guns), and focus on his true genuine experiences in order to maintain his authenticity as an artist.

Featured Image by All We Got Ent.