Home » BC Fails to Keep Pace With Syracuse’s Shooting Barrage 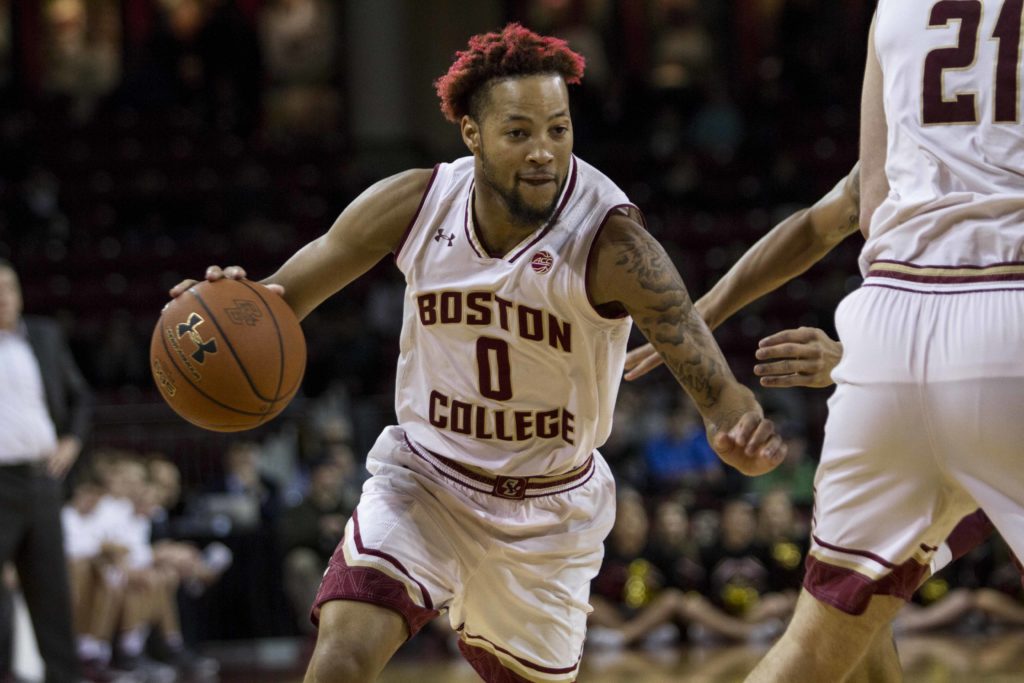 BC Fails to Keep Pace With Syracuse’s Shooting Barrage

Syracuse, losers of four of its last five, entered Wednesday night’s game against Boston College men’s basketball with the worst field goal percentage and 3-point percentage in the ACC. In order for the Orange to win, it was going to have to shut down the Eagles’ trio of guards: Ky Bowman, Jerome Robinson, and Jordan Chatman. Well, that was the narrative at least.

Led by Tyus Battle, Syracuse turned the game upside down, shooting a season-high 60.4 percent from the floor, including a scorching 43.8 percent from beyond the arc. In a performance reminiscent of the Eagles’ ACC opener against the Orange last January, Syracuse was practically unguardable, even knocking down its fair share of contested shots.

Although the Eagles converted 11 of their 23 triples and close to 48 percent of their total field goal attempts, they had no answer for the Orange on the other end of the court, allowing five Syracuse players to reach double figures. When all was said and done, the backcourt duo of Frank Howard and Battle looked like one of the best tandems in the ACC, even better than that of Bowman and Robinson. The two combined for 42 points, guiding the Orange to a 81-63 victory—its most decisive win since late November.

Four minutes in, it appeared as if the Eagles (13-8, 3-5 Atlantic Coast) had figured out Syracuse (14-6, 3-4) head coach Jim Boeheim’s famous 2-3 zone. Using dribble-drive penetration, BC repeatedly attacked the key, only to dish the ball back outside for an open perimeter shot. It worked to perfection—literally. The Eagles drilled their first five field goals of the game, four of which were from downtown, jumping out to a 14-7 lead.

Syracuse was saved by a Battle layup and a media timeout. But as soon as the Orange broke the huddle, it put its foot on the gas. Immediately, Syracuse strung together a mini 5-0 run to tie it all up. Bowman and Robinson did their best to keep the Eagles competitive, netting a handful of free throws and dialing up a highlight-reel, backdoor alley-oop dunk. That was, until Oshae Brissett took over the game. The freshman forward scored 10-straight Orange points, sinking a pair of 3-pointers, single-handedly propelling Syracuse to a four-point lead.

To make matters worse for BC, Steffon Mitchell—the Eagles’ all-encompassing stretch-four—took an inadvertent elbow to the face, as Bowman tried to tip a Syracuse pass directed toward the paint. The 6-foot-8 freshman left for the locker room and was eventually ruled out. The team’s official Twitter account reported that he will undergo concussion protocol.

The absence of Mitchell severely depleted BC’s interior. Soon enough, Paschal Chukwu—the 7-foot-2 center from Westport, Conn.—began to assert his presence down low. Time and time again, the junior altered inside shots, effectively taking the Eagles’ remaining big men, who finished a combined 1-of-6 from the floor, out of the game and forcing BC’s guards to live by the jumper.

Brissett handed the keys to Howard, who went on a 10-point run of his own, building a double-digit Syracuse advantage. Logging 18 points for third time in his last four games, the 6-foot-5 guard showcased the ability to shake defenders on his way to the basket, absorb contact, and drain the long-range shot. Chatman hit a couple more 3-pointers to close the gap in the waning minutes of the period, but Chukwu got the last laugh of the half, getting an inside shot to go, one second before the buzzer sounded.

The Orange—a team that averages the fewest bench minutes in college basketball this season—didn’t lose a step in the back half of play. Meanwhile, BC, just two spots ahead of Syracuse in reserve usage rate, fell apart.

After Bowman drilled a shot from NBA-range to start the period, the Eagles disappeared in the shadow of a 11-0 Orange run. Marek Dolezaj came to life, driving to the lane and finishing off-balanced and acrobatic layups with ease, and Battle—who tallied 15 of his game-high 24 points in the second half—caught up to Howard in the box score.

Down 18, it looked as if nothing else could go wrong for BC. Then, a few minutes later, Ervins Meznieks picked off a Brissett pass, pushed the ball up the court, elevated, and missed a wide-open, breakaway layup off the front iron—perhaps a sign that it simply wasn’t the Eagles’ night.

Bowman rivaled Sunday’s turnover-happy performance, coughing up the ball five or more times for the second-consecutive game, and Chatman picked up a flurry of personals, putting himself in serious danger of fouling out. That danger became a reality with under six minutes to go, when the junior was called for an illegal screen, virtually extinguishing any sort of potential BC comeback. Syracuse, namely Battle and Howard, exploited the Eagles’ makeshift lineup—consisting of Bowman, Robinson, Vin Baker Jr., Luka Kraljevic, and Nik Popovic—the rest of the way, capping off the blowout win.

Throughout the season, Eagles head coach Jim Christian has frequently stressed that, while depth is a concern, he has five capable scorers at his disposal. Pending an MRI, the fourth-year coach could very well be down to four. Now two games under .500 in the ACC, BC’s fate rests on the health of its freshman forward. Without him, the Eagles look eerily similar to last year’s unit that ended the year on a 15-game losing streak.