Starting on Friday, Boston College women’s hockey will play its fourth and final weekend series of the month against Providence. The No. 2 Eagles (22-2-3, 15-1-3 Hockey East) will be facing a top-10 opponent for the first time in 17 games, since it split a two-game series against then-No. 8 St. Lawrence. BC and No. 10 Providence (14-7-6, 10-3-4) are currently the top two teams in Hockey East, but even if the Friars can pull off two upset wins, they will still remain well behind the Eagles in the standings, who are  23 points ahead of their long-time rival. The two programs are currently headed in different directions: BC is on a four-game winning streak, while Providence has only won one of its past five games.

The game will be livestreamed on ESPN3 and available online at WatchESPN.

1) With a win, goalie Katie Burt ties the NCAA record for career wins at 114.

2) Caitrin Lonergan and Daryl Watts have combined for 308 shots this season—34 more than any other forward-duo in the country.

3) The Eagles score on the power play on more than a quarter of their chances (25.4 percent conversion rate).

1) Freshman Maureen Murphy leads the team in goals with 17.

2) Goaltender Madison Myers has posted a .925 save percentage in her 25 games in net this year.

3) The Friars have scored seven shorthanded goals this season—the second-most in the conference behind BC, which has played two more total games this season.

The Eagles picked apart the Friars, 7-4, in a Nov. 3 matchup, thanks to two goals from Grace Bizal. BC scored at least twice in each period, and Burt recorded 32 saves on her end of the ice.

If it can find chances when both teams are at full strength. The Friars are one of the top teams in the NCAA when shorthanded. They boast a .864 penalty-kill percentage and, statistically speaking, for every goal Providence has let up on the power play it has logged one of its own when down a man. BC is still the favorite for a reason, though. With 31 more goals than any other team in Hockey East, the Eagles simply need to outpace the Friars’ offense to come away with two victories.

It fails to play disciplined defense. In their last four games—all wins—the Eagles ended up in overtime twice. During that span, BC played somewhat careless hockey that led to giveaways and Burt bailing out the defense with some fantastic saves. The Eagles can’t afford to turn the puck over or sag in their own zone. After all, this is a Friars team looking to avenge their early-season loss and get back on track before the home stretch. 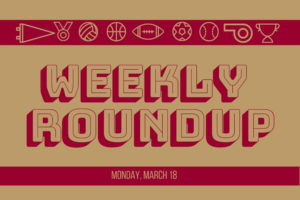