While countless college students waste their time trying to defend Palestine, fight climate change, and resurrect Bernie Sanders, I have taken up a cause that will benefit our generation far more in the long term: determining whether Mattress Firm’s name is a pun. Only after I find the answer will countless millennials be able to stop obsessing over this mystery as I do.

For years, this question has prevented me from sleeping at night. “What mattress-hawking entrepreneurs would give their business such a strange name?” I wondered. If the name is a pun, it isn’t a particularly good one. Though the adjective firm often appears alongside the noun mattress, I’ve never heard anyone express a desire to buy a firm mattress—from Mattress Firm or anyone else. I doubt that such a large company would stake its business on intentionally poor advertising.

During one evening in my childhood (several decades ago), my mom and I saw a Mattress Firm commercial. “Is it a pun?” I shouted at the TV. My mom, meanwhile, just tried to pretend she had given birth to a normal child who didn’t consider these philosophical questions. She didn’t appreciate how much time I spent thinking about Mattress Firm, the firm that sold firm mattresses.

It would be years before I finally decided to get up and solve this mystery.

Several weeks ago, I was in an Uber with my friend Andrew Cammon—known colloquially as “Andrew Campus.” On our way to White Horse, we passed by the local Mattress Firm franchise.

“Do you think Mattress Firm’s name is a pun?” I asked.

Andrew Campus said, “Maybe,” but his face said, “That’s the stupidest question I’ve ever heard”—just like my mom’s had. I would have to undertake this journey without any assistance and succeed against all logical expectations, similar to how Donald Trump won the presidency.

According to Wikipedia, which I use to do most of my research, Mattress Firm’s predecessor was Discount Mattress Barn, another example of dubious naming skills: if you’re buying your mattresses from a barn—even if they are discount—you really need to reevaluate your life. Unfortunately, Wikipedia didn’t have the answers that I sought. I’d have to dig deeper.

I went to Mattress Firm’s website, which allows customers to chat with Mattress Firm representatives. During the first of these Tinder-style chats, I “matched” with a representative named “Kristina,” who claimed not only that Mattress Firm wasn’t a pun but also that she didn’t even understand what the pun would be.

Realizing “Kristina” was too foolish to comprehend her own employer’s possible sense of humor, I next matched with “Trudy,” who said that she did understand what I was asking but that she didn’t “think” Mattress Firm’s name was a pun. Clearly, I was talking to people too low on the totem pole. I needed to go to the source of the mattresses—the bedquarters, if you will.

I didn’t even come up with that pun. Mattress Firm refers to its headquarters as “BEDquarters,” which is pretty clever, especially compared to the company name. After placing a call to BEDquarters and navigating the byzantine sequence of options offered by the robot who answered the phone, I was connected with a customer-service representative who hung up the phone as soon as I told him the reason for my call. Mattress Firm knew that I was onto it.

Returning to the company’s website, I obtained an email address from another of the fake-named representatives populating Mattress Firm instant messaging. On Jan. 21, I sent Mattress Firm a message over email and Facebook: “I’m a journalist writing an article about Mattress Firm for The Heights with a deadline of Wednesday, Jan. 24. I have only one question: is the name ‘Mattress Firm’ an intentional pun, and, if so, may I have a quote about it?”

An auto-reply informed me that Mattress Firm would respond within 24 hours. Forty-eight hours later, I’m not only waiting but also crying because of Mattress Firm’s lies. I still have no idea whether its name is a pun. Apparently, I am far less like Trump than I hoped to be. Sad.

A few good things came out of this endeavor. I befriended Katie Lamirato, a respondent to my breathless Facebook posts on the Mattress Firm conspiracy and the only person who seems to care about it as much as I do. She seemed a bit concerned when I said that I was going to find the company’s press officers on LinkedIn, but that’s the only way to solve the mystery. In fact, “Krystal” from Mattress Firm instant messaging suggested it. I hope that “Melissa R—-s,” senior manager for content marketing at Mattress Firm, proves as excited to connect on LinkedIn as I am.

I will inform you all, my dear readers, when I discover the truth. 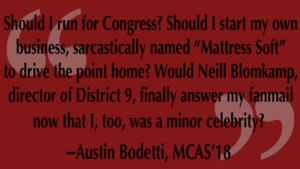